Into the Swing of Things 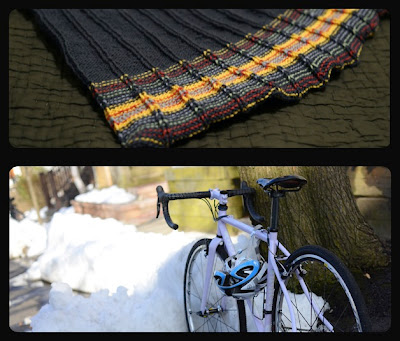 Over the course of last year I made considerable progress on the bike as far as endurance and handling skills. But what I found most rewarding was having gotten to the point where long and strenuous rides over challenging terrain began to feel normal, with the physical aspects of the riding itself fading into the background and the adventures the riding was enabling taking over. Having gotten a taste of this made it clear how much I valued and wanted it.

This made the start of this season all the more frustrating. Not riding takes its toll, we all know that. And the only fix is to start riding again - it will come back quicker than the previous year. We all know that too. But even experienced cyclists can feel deflated when, having emerged out of hibernation, they find themselves exhausted and with a sore butt after a ridiculously short ride. In response to a post earlier this week, I've heard from several local riders telling me just that. Strong, experienced guys who do hilly Centuries on gravel for fun, frustrated that they've lost their cycling mojo after a bad winter.

So here is something to cheer you up: A true story. I got my groove back after just 3 - count them, 3 - rides, and you can too!

The Damage...
Okay, I will try to be honest here. Between the snow and the weeks of being sick and the snow again, I had not been on a roadbike for close to 2 months, not counting a handful of sporadic short rides. I had also gained about 15lb in "winter weight." So that was my starting point. 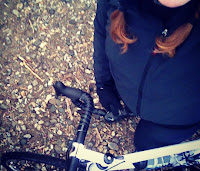 The First Ride...
I rode a cyclocross bike with mixed terrain tires. I rode solo, for just 25 miles with a 15 minute break in the middle. It was an extremely cold and windy day, making me feel even more sluggish than I already did. By the end of the ride I was tired, and the next morning I felt shockingly bad. The muscles in my legs hurt, my arms hurt, my abdominal muscles hurt, my butt was sore, the works. Hard to believe that this was the same body that did all that cool stuff last year. Discouraged and in a bad mood afterward, I knitted furiously to dull the pain. 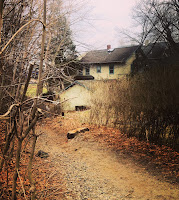 The Second Ride...
The very next day, I aimed to repeat the 25 mile route and again went solo. I had a hard time on this ride, because my butt was still sore from the day before. Again, it was cold and windy. After the ride I felt tired and achy again. In the evening, I tried not to dwell on how out of shape I was, knitting instead.

The Rest Day...
The following day I rode my city bike around town as usual, but not my roadbike. I was still a little tired from the previous two rides, but my butt was finally recovering. 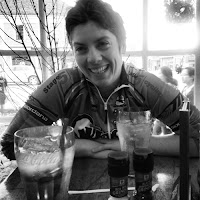 The Third Ride...
This time I had plans to ride with Emily "Fixed Gear Randonneuse" O'Brien. I warned Emily about my sorry state, but she was undeterred, and so we set off. For the first few miles I was out of breath, struggling to hold a conversation while riding at a reasonable pace, so much so that I questioned the wisdom of continuing. Then we headed uphill, and I braced myself for the painful struggle. Oddly it never came. I wasn't fast, but I had low gears and the hill was okay. Then came the downhill, and some more riding, and some miles later - boom! I remember when it happened: We were passing the Air Base, and just like that, I could tell: I got my groove back. The sluggishness, the cobwebs, gone. The achiness gone. Between riding with Emily and on my own, it was a 40 mile day. Today I rode again, and the groove is indeed back: I feel like my old self again. And, as a bonus, I have a new skirt for Spring.

Without a doubt, I need more time in the saddle before a 100 mile ride, or even a non-stop 100K. But it's attainable.

Three rides to get into the swing of things after the winter we've had ain't bad at all. Cheer up, New Englanders and let's ride!
Labels: bike friends knitting roadcycling