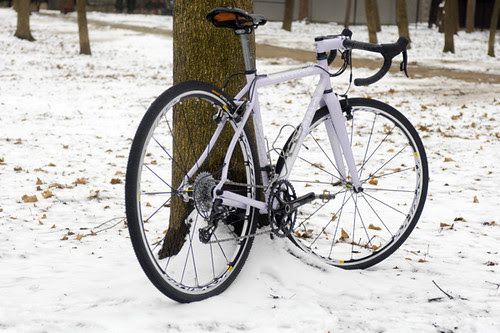 Last time I was on a roadbike, I crashed into a tree with my knee. It was one of those milky winter afternoons - the trees a stark black, the ground a soiled white, and the sky a bruise lilac. And it was cold, cold, cold - each breath turning into a patch of fog in front of my face. On afternoons like this, I get a rush from the feeling of being out in the middle of nowhere, wandering through the woods on my own. I was riding the Honey cyclocross bike, its toy-like handling accentuating my high. Hopping, successfully, over a cluster of tree roots, I let out a giddy squeal. It resonated through the empty woods like a metallic ring. As if in reply, I heard the shrill sound of a bird somewhere in the distance. Marco! Polo! Ours were the only voices in the woods.

Before turning home, I ventured onto a snow-sprinkled path and began to navigate its gentle winds. And that was when it happened. I hit an icy patch and the bike slid in an unexpected direction as I tried to steer it around the bend. I ended up in the trees, my hands clutching the bike to keep it from hitting the ground and my right knee jammed into some dry mossy bark.

I experienced this event as more of an unplanned stop than a crash. It was non-traumatic, and did not feel noteworthy enough to write about at the time. I only remember it now, because I dreamt about it last night. Not the crash, but the ride leading up to it.

In my dream I was practicing leaning the bike this way and that using my hips, while moving in a zig-zag fashion along the frozen trail. The sensation of balancing as I did this was unusually, remarkably vivid - more vivid even than the beauty of the winter landscape. The dream went on and on as I felt my weight shift with each change of direction.

I woke up disoriented, wondering why I was horizontal and where the bike was. Had I managed to crash again? Then the moment came when I realised it had all been a dream, and a wave of disappointment washed over me. I wanted to be as in touch with my body's sense of balance in real life as I was in the dream.

The bruises lived on my knee for about a week after the tree's embrace, but now all trace of them is gone. It is purely incidental that I haven't ridden the bike since it happened. We've had some heavy snowfall, and then I got sick. I am still weak, but the dream made it feel imperative that I go out and try to recreate the balancing act. Perhaps spring is coming, at last.
Labels: roadcycling stories winter cycling