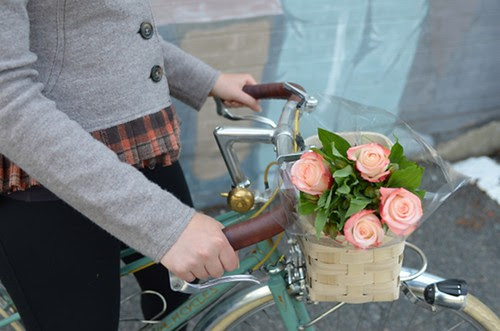 Riding home from the grocery store today, I enjoyed a fine view of some leeks and potatoes in my basket. Looking down on them as I pedaled, I had one of those experiences where shopping by bike felt like an exciting and novel outing, even though I've been doing it on a regular basis for years now. The idea of carrying leeks and potatoes home on my bike, then cooking them, suddenly struck me as both romantic and funny. My mood lifted, I flashed a silly grin at cars and pedestrians as I passed them.

Later this got me thinking about how often basket and pannier contents are used to illustrate the appealing nature of cycling. The bouquet of flowers. The French baguette. The fluffy bunch of leafy vegetables. I suppose these things make people think about picnics and outdoor farmer markets. But even beyond that, there is something about the sight of fresh food or flowers sticking out of a bike bag that makes errands seem like fun. I've even had comments about that from strangers on my way home from buying groceries "Oooh, vegetables in your basket - That looks like fun!" Loading said vegetables into the trunk of a car wouldn't have the same effect.

One thing I'd like to carry in a bicycle basket some day is mushrooms. My romantic fantasy is to ride to the forest, then walk my bike down a path strewn with pine needles, picking mushrooms (chanterelles and morels, with which the forest will of course be filled) and placing them directly in the basket. Cycling back, I'll be able to smell their earthy fragrance all the way home, before washing and tossing them on the frying pan with some sautéed onions...

Which reminds me that those potatoes and leeks won't cook themselves, so I better get to it. What's your idea of romantic bike basket contents?
Labels: basket