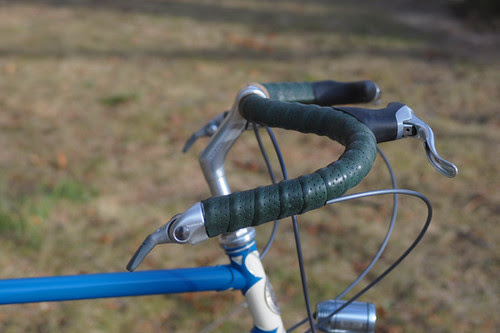 Iconic of the Bridgestone XO era and later championed by Rivendell, the Moustache handlebar is perhaps more popular today than ever. The dramatic forward sweep, the sideways-mounted road levers and the bar-end shifters make for a visually distinct and intriguing presence. The design is easiest to understand if you think of it as a flattened out drop bar, with the brake levers installed on what would have been the hooks. Grant Petersen designed the Moustache in the early 1990s specifically for the Bridgestone XO bicycles, as a kind of a hybrid between upright and drop bars. Today several manufacturers produce their own versions (including Soma and Origin8), though likely the Nitto/ Rivendell model remains closest to the original. 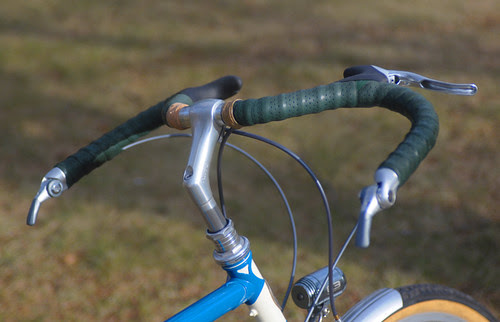 I first tried Moustache handlebars three years ago, and I remember being surprised by the leaned-forward position they put me in. Unlike the handlebars you see on city bikes, the Moustache is swept forward, rather than swept back - putting the rider's hands way out there, forward of the stem. Depending on stem length and handlebar height, this can be quite an aggressive lean. Recently I tried the bars again: I've been getting questions about them from readers and wanted to refresh my memory.

Riding with Moustache bars again was fun; my riding style has changed so much since the last time. These bars are unique and remind me of no other handlebars I've ever tried, so it's hard to find a point of reference. The forward sweep is vaguely North-Roadish, with two notable exception: All the hand positions are forward of the stem, and the brake levers are in the forwardmost points of the sweep, rather than in what we are accustomed to thinking of as the gripping areas. 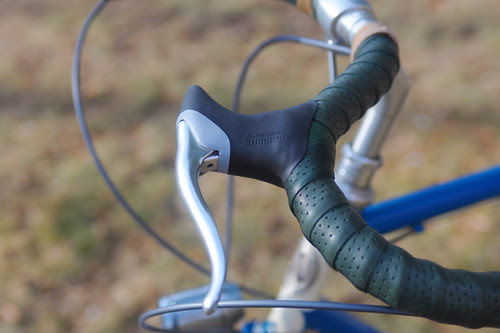 The shape of the handlebars feels pretty good, and I have no trouble squeezing the levers from their location (here is an illustrated guide to the hand positions). However, I find the setup counterintuitive. Squeezing the brake levers puts me in a forward-leaning position, whereas using the bar-end shifters puts me in a leaned-back position: the exact opposite of what I am used to. After all, when I squeeze the brake levers I am trying to reduce speed - and the aggressive posture counteracts that - especially when coming to a complete stop. It was interesting to experience the discrepancy between what my body wanted to do when stopping and what the bars wanted me to do. On my own bikes, I prefer for the brake levers to be in a location that allows my posture to be more relaxed. 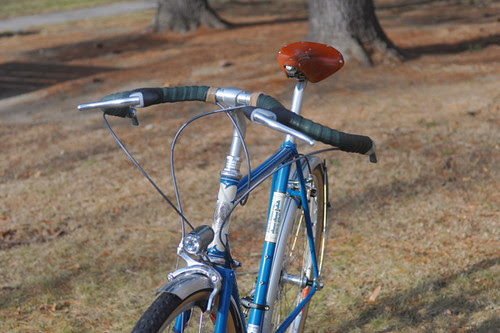 A friend who rides with Moustache bars explains them as a variant of riding with vintage, non-aero drop bars (where you brake mainly from the hooks). He believes those who are used to that will find braking with the Moustache intuitive, whereas the likes of me who mostly brake from the hoods of modern drop bars - or from the edgemost gripping areas of swept-back handlebars - may have trouble with the setup. He could be right. Either way, it's a handsome handlebar that I enjoy seeing on others' bikes.
Labels: handlebars product reviews Rivendell