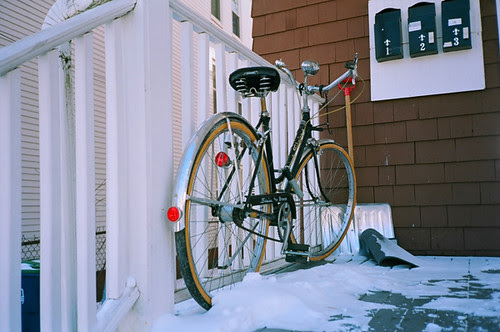 Walking through our neighbourhood, it's always interesting to see how many people store their bicycles out on the porch. Passing one particular block, it seemed like every other house had one. Occasionally readers ask whether storing a bike on the porch is a good idea, especially in the winter months. And as usual, it depends.

Indoor bike storage can be tough around here, so it's understandable that for many the porch offers a happy compromise. The bike is protected from precipitation by a roof, so it won't be soaking wet or covered in snow come morning. It is on private property and not out in the street, which offers some peace of mind. And it doesn't take up valuable storage space indoors. 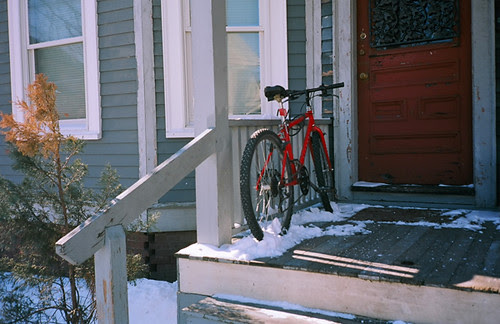 But a porch does not make a bike theft-proof or immune to the elements. It goes without saying that the bike should be locked up securely, ideally with a thick chain. And if you live near salt water, or in an area that gets heavily salted in winter, rust will form despite the roof cover. Components may still freeze, due to moisture getting into them. I have also heard accounts (though have never seen this with my own eyes) of steel bicycle tubes distorting when left outdoors through the winter - most likely due to water condensing, then freezing inside the tubing.

The best candidates for porch living are either beater bikes that you do not care about damaging, or heavy-duty utility bikes with thick tubing, durable paint, and rust-resistant components. Both categories also have some built-in theft protection by virtue of being perceived as too unappealing or heavy to steal. Personally, I would not hesitate to store a bike on my porch, if I had one - though not a delicate or expensive one. And not one heavy enough to make the porch cave in... something I saw the other day during one of my walks.
Labels: locking up winter cycling