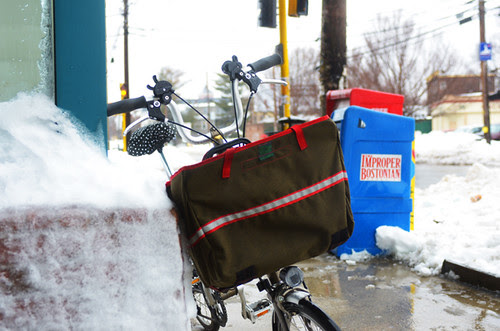 Today were possibly some of the worst conditions I have ever cycled in - a situation made all the more dramatic by the fact that I wasn't merely cycling; I was erandeurring. But let me start from the beginning. You see, there is an entire culture out there that thrives on turning transportation cycling into a sport in its own right - reinventing commuting as series of challenges to make it more interesting. While this approach is pretty much the antithesis of my own, I am nonetheless intrigued by it. When the utilitaire and coffeeneuring crazes swept the nation last year, I followed along with interest. Loosely modeled on randonneuring, these games involved keeping track of one's coffee shop and utility rides, complete with control cards and minimum mileage requirements. The authors of the Chasing Mailboxes blog in Washington, DC hosted the challenge, diligently collecting entries from participants all over the US, posting updates and results.

This winter they announced their latest project: the errandonnee. Participants are challenged to "complete 12 errands in 12 days and ride a total of 30 miles by bike between February 9-20." A detailed list of rules was again provided, along with control cards. I read through it all and decided - what the heck - to give this thing a try. While riding a minimum of 30 miles in errands over the course of 12 days would not be out of the ordinary for me, I wondered what it would be like to keep track of this mileage, to categorise it according to the rules, and in general to reframe everyday cycling as taking part in a challenge. 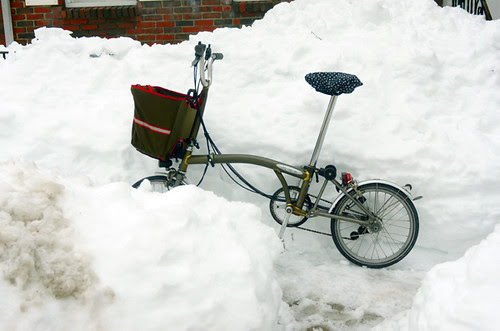 The thing I did not foresee, was that the challenge aspect would become quite real. On February 9th we had our blizzard, and on the next day I still did not feel like braving the streets on two wheels. So as of this morning, I had only 10 days to complete the 30 miles of errands. Not only was there plenty of snow still on the roads, but it was now also raining badly. 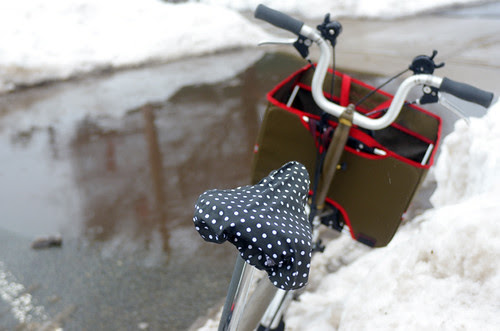 I may lack the words to adequately describe today's road conditions. There wasn't just snow, there was deep water. Temperatures had risen sharply overnight, with snowbanks melting and additional rain coming down. By mid-day, some streets were downright flooded, and in many cases the water concealed slush underneath. On top of this, it was raining quite hard, with poor visibility and all the extra traffic chaos that comes with that. I now own a bright yellow raincoat for days like this, and that's what I wore. I also always have my lights on when it rains, despite it being daytime. 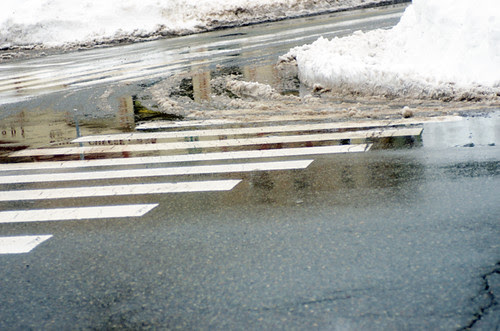 Even along stretches where the road itself was mostly clear, turns were treacherous, as that was where deep water and uncleared snow were gathered. Street corners were also where snowbanks were at their highest, which, as I soon figured out, meant that cars turning onto the main road from side streets had poor visibility. After a couple of close encounters, I decided the safest place to ride was smack in the middle of the travel lane. 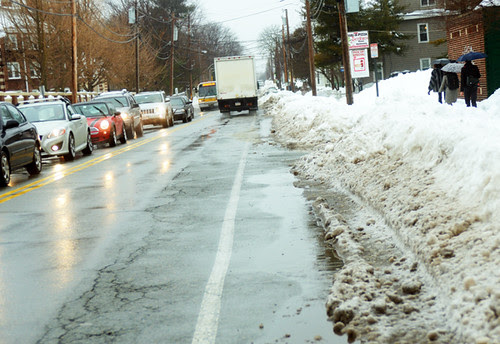 Mid-day traffic was bad, and being on a bike did not put me at an advantage this time. Between the snowbanks and the trucks, there was not always a way to cycle past the standing traffic. My pictures were taken close to home, on a street where I felt it was safe to get off the bike and photograph the conditions of the roads. But for most of my route it didn't feel right to stop. Rain kept coming down, cars were honking at each other and executing all sorts of crazy maneuvers, roads were flooded and/or still covered with snow, and the whole thing was more than a little stressful. 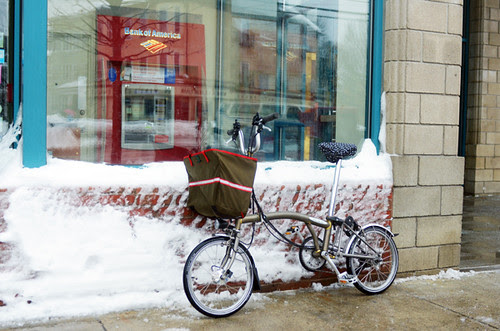 In the course of all this, I completely forgot that I was errandeuring, remembering it only once I'd returned home. So far, the awareness of taking part in a challenge has not made me feel any differently about doing errands by bike. I had to go out today either way, and riding was still preferable to walking in ankle-deep water.

My impression of the utilitaire, coffeeneuring and errandonnee family of challenges, is that they are largely for athlete cyclists who might normally drive for transportation, but are looking to do it more by bike. The competitive paradigm appeals to them, so they've extended it to transportation cycling as a form of motivation. But I do know of cyclists who are purely commuters and have been enjoying the challenges too. Ultimately, I see errandeuring as a celebration of cycling, with its elaborate rule structure as largely tongue in cheek. Now to check whether bonus points are in store for the epic road conditions I've endured...
Labels: Brompton urban cycling winter cycling