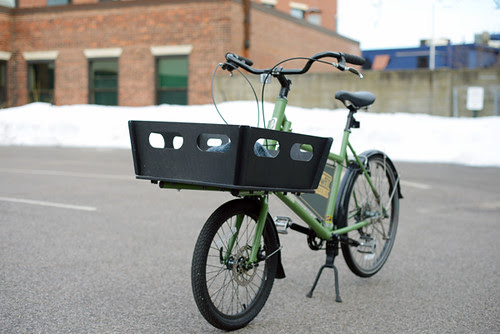 Civia is a Minnesota-based manufacturer of transportation and utility bicycles, known for its unisex designs and reasonable price points. I do not see many Civia bikes in New England. But for some time now I've admired the look of their Halsted model and wondered what it was like to ride. Last week I finally got the chance to find out. 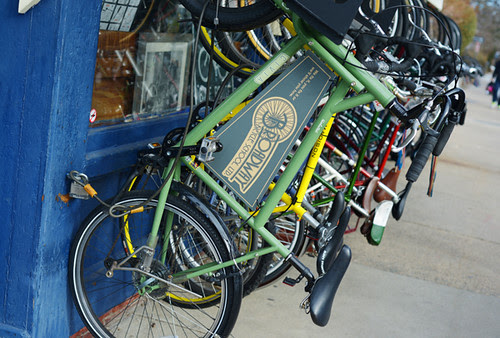 The Broadway Bicycle School in Cambridge, MA uses one of these as a shop bike, and they allowed me to take it out for a spin. 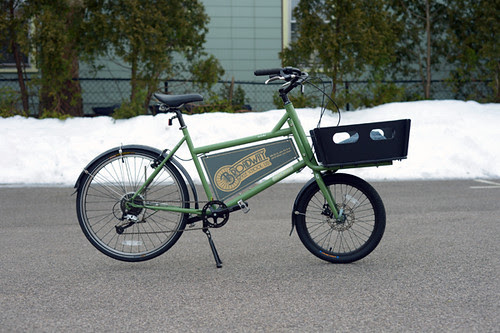 The Civia Halsted is a modern variation of a classic front load delivery bicycle. It is designed around a standard size (26") rear wheel and a small (20") front wheel, above which sits a frame-mounted platform. This type of construction creates extra space to accommodate a large front load, whilst also positioning the load lower to the ground. 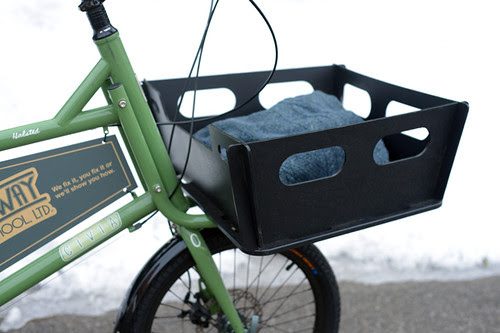 Because the platform is connected to the bicycle's frame rather than the fork or handlebars, it remains independent from steering. This, together with its low placement, is aimed to minimise the front load's impact on the bicycle's handling.

The front platform ("rack deck") is rated for 50lb of carry capacity. It can be used on its own, or built up as a front crate/basket using modular side panels (as shown in the pictures). The deck and side panels are made of HDPE plastic. The tubes securing the platform to the bicycle's frame are steel, painted to match the bike. 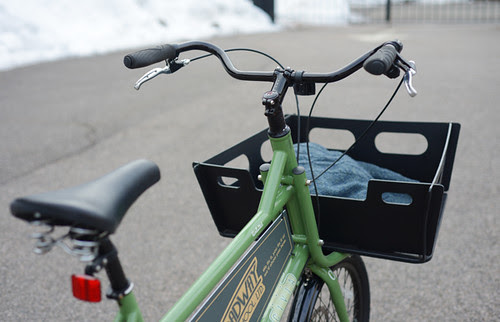 The Halsted is available in one size only, and will fit riders between 5'2" and 6'5". The frame features a dropped and moderately sloping top tube. Thanks to the small front wheel, this results in a very manageable standover height for someone of my size (I am 5' 6 1/2"). I did not have to swing my leg over the back of the bike, but was able to step over the top tube after slightly leaning it toward me. 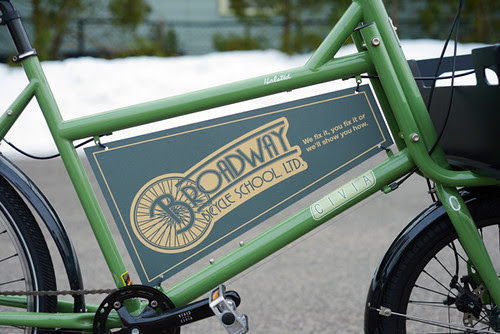 Another feature of the Halsted frame is the possibility for attaching a plaque to advertise one's business. This is nicely integrated, and makes for a fabulous-looking shop bike. 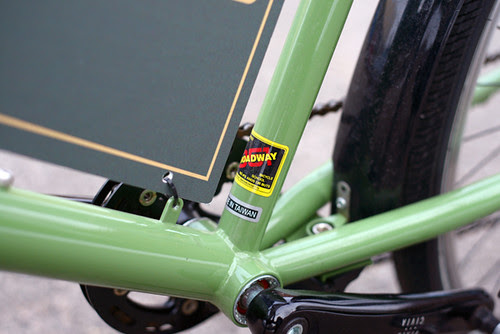 The Halsted's cro-moly frame and fork are TIG-welded in Taiwan. The finishing is smooth and attractive. The straight, unicrown fork is tiny, on account of the small front wheel, and looks good on the bike. The colour pictured is from 2012, and the current one (shown here) looks to be a light periwinkle-gray. 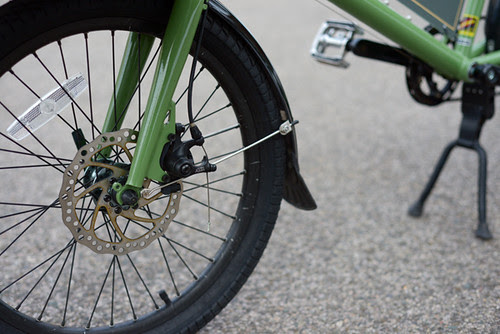 The front wheel is equipped with a disc brake. 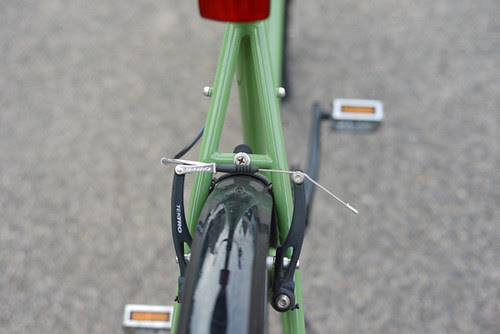 The rear with a v-brake. 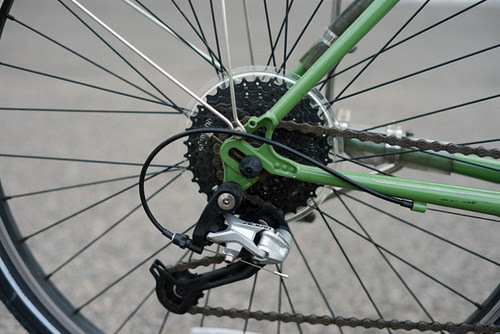 The standard drivetrain is 1x9 derailleur gearing, but the semi-horizontal dropouts make it possible to build the frame up with an internally geared hub. 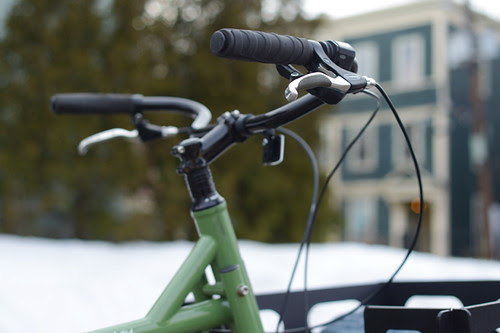 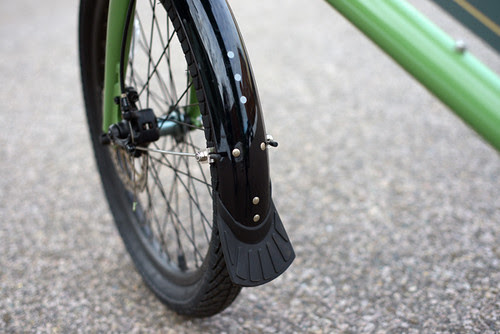 Fenders, a rear rack or lighting are not standardly included with the bike. A double-legged kickstand is included (though I did not find it especially stable in windy conditions).

The low bottom bracket is great for toe-down stopping and full leg extension while pedaling. There is no chance of toe overlap with the small front wheel. The components included in the stock build were easy and comfortable to use.

Considering that the Broadway Bicycle School has been using this bike for over a year and storing it outdoors for large portions of the day, I thought it to be in good condition. Aside from surface rust around some bolts and components (namely the disc brake and rear derailleur), I saw no sign of weather-related damage. 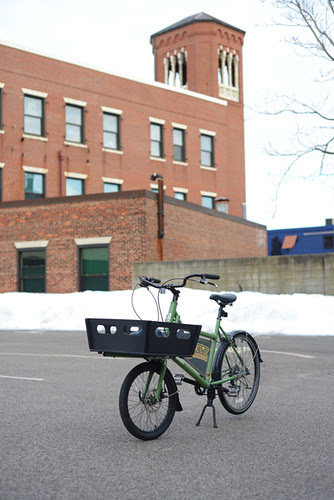 My Civia Halsted test ride consisted of cycling down the road to buy groceries, then riding home to drop them off. After this I circled the neighbourhood with the front basket unloaded, before taking pictures and returning the bike to the shop. In total it was about 4 miles, on a cold and windy day. The groceries I carried were distributed between two shopping bags, and included heavy items such as milk, wine, vegetables and a 5lb sack of apples. In addition to this, I carried my camera and laptop bag, as well as a couple of books and some spare clothing. Loading all of these things into the crate, I felt that it could have been made a bit deeper, with the modular panels sturdier (they rattled a bit in motion). But I was nonetheless able to stuff everything in securely, without the use of bungee cords.

The Halsted's handling felt distinct, but fine, with and without weight in the front basket. Steering did not require special effort, though it had a quality to it that felt particular to this bike. I could definitely feel the weight in the front, but this did not result in any difficulty controlling the bicycle. One thing I noticed, was that I was taking corners wider than normally, but I cannot be sure that this is related to the handling and not to my awareness of the wide front crate. The bike rolled easily uphill and generally felt fun. I also liked being able to keep my eye on my stuff in front of me at all times. In that sense, it was kind of like riding a larger version of my Brompton. 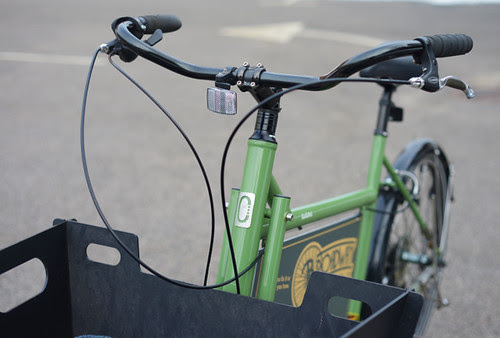 I did not see the Halsted's geometry chart until after my test ride. But once I did, I noticed the high-trail front end (trail in the 80s, according to my calculations). Some might consider this unusual for a bike designed to carry so much weight in the front. While I cannot say how the Halsted handles at its maximum carry capacity, with a moderate front load I thought it very ridable.

When I look at pictures of Civia Halsteds in use, it is apparent that the bikes can also carry substantial weight in the rear. Owners attach rear racks, child seats, even Xtracycle extensions. The Broadway Bicycle School often uses a trailer with theirs.

Still, one major benefit of the small front wheel design, is that it increases the bike's carry capacity while keeping the wheelbase reasonable (1134mm). The overall size of the Halsted is the same as that of a typical city bike, and at 33lb it is manageable to lift and maneuver. The compact basket-bike design is worth considering for those interested in a front-load utility bike. And priced at $1,195 the Civia Halsted is a good value.