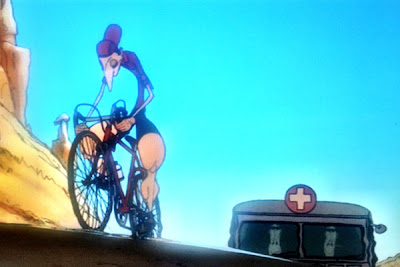 Well, I finally watched the Triplets of Belleville. For those who have not seen it, this is a French animated film about cycling, music hall singers and sinister men in black - surreal and somewhat disturbing (in a good way). No subtitles required even if you do not understand French.

There are many fascinating details in this film, but I don't want to spoil it for those who haven't watched it. Instead I just want to note one hilarious element: the caricatured cyclist's body.

Ah, the gaunt, emaciated cyclist. Sunken eyes, protruding cheekbones. Head bobbing up and down as if the straining tendons of the neck can barely support it. Hunched back and shoulders. Spaghetti arms. Non-existent waist, narrow hips... And then, suddenly - bang! An explosion of thigh muscle, bulge upon bulge, tapering at the knees before exploding again into freakishly well defined calves. I have seen such exaggerated renderings before, but none as expressively done as in this film. The half-soulful, half-dead look on Champion's face completes the archetype.

I have now met a few real-life cyclists with similar body types. They disguise it surprisingly well when wearing regular clothing, but once in lycra the leg explosion is revealed. Seeing such marvelously distorted proportions in person, I try not to stare. But it's kind of awesome, and awe-inspiring. Gives "all legs" a new meaning.

PS: You can tell it's winter, because I'm falling prey to cycling movies. Any recommendations besides the usual suspects? For now, I'll just have to live with "Belleville Rendez-Vous" stuck in my head...
Labels: films roadcycling