Thoughts on Lugs, Then and Now 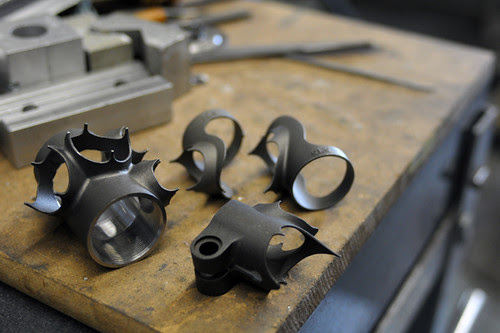 Those who love lugged steel bicycles arrive to that preference in one of several ways. Often they grew up with lugged steel. The look or concept of it either holds sentimental value or represents quality. Perhaps their dream bike - the one they'd see in the bike shop window every day on their way home from school- had distinct lugwork. Or else lugs are incorporated into a "they don't make'm like they used to" narrative. On the other hand, a person entirely new to bicycles might simply decide they like lugs - either for aesthetic reasons or perceived functional ones.

With me it was definitely the latter. I was born in 1979. The bikes of my youth looked like this. And as far as shop windows... Well, come to think of it, I don't even remember any bike shops around when I was growing up; bikes came from department stores.

I am trying to remember how I even learned what lugs were. I certainly did not know about them when I first got into cycling as an adult. Neither did I have an ingrained preference as far as frame material. Before I bought my first grownup bike, I rode a rented aluminum hybrid in Austria - which, frankly, I thought looked kind of nice. But it rode a little harshly, and when I mentioned this to the man at the rental place he advised that I buy steel - giving me a long, expert-sounding lecture about the benefits of steel over aluminum. This was among the things that sent me in that direction.

Fast forward a bit, and I remember standing at the Belmont Wheelworks bike shop, looking at a collection of hand-cut Peter Mooney lugs through the glass counterpane. Peter Mooney was the first custom framebuilder whose bicycles I saw in person, as well as the first builder whom I would meet face to face. I knew that the filigreed objects he made were those sleeve things I'd seen on some bicycles' joints. "Those are beautiful," I said. "Yeah, Peter makes his own lugs," replied the person at the counter. And I think that's how I learned what they were called.

So I went home and looked it up online. Until that point, the artist in me thought the sleeve things looked beautiful, but I had assumed they were entirely decorative - much like embellishments on furniture and porch railings. Now reading about them, I understood that they served as frame joints and were inherent to the frame's construction. I also found many articles and posts expressing the opinion that this lugged construction was "better" (stronger, more receptive to repair, requiring more skillful execution) than other kinds. This was even before I stumbled upon Rivendell (although it set the stage for Rivendell's appeal); this was coming from individual framebuilders and from vintage bike collectors, of whom I soon came to know a few personally. The argument seemed logical enough: Modern bikes, like everything else that's made now, were fragile and disposable. The traditional method was meant to last. And what made me particularly receptive to this argument was visiting bike shops and trying the different city bikes that were available at the time. The bikes that felt uncomfortable or seemed poorly made, happened to be welded.

This is all simplified of course. But it's not an inaccurate summary of how my preference for lugged steel came about. It wasn't a perspective I brought with me to the blog. But it developed pretty quickly within the first year of it.

Interestingly enough, the first stages of its unraveling had to do with aesthetics. I liked looking at bikes and spent a lot of time doing it, studying frames from different eras and different builders. I also live in an area where handbuilt lugged steel bikes are plentiful, which gave me in-person access to a lot of the custom work. One thing I began to notice, was that lugs and their various relations (fork crowns, reinforcer plates, dropout sockets, and the like) gave bicycle frames a certain aesthetic uniformity. Most framebuilders do not make their own lugs but purchase pre-fabricated sets, and there aren't many of those to choose from. And while some builders modify existing lugs to the point that the originals are not recognisable, most do not. Because of its visual distinctness, lugwork has a strong influence over a bicycle frame's aesthetic. And the more frames I looked at, the more I started to feel that the same generic details were dominating many framebuilds' work. I began to question what it was that I was actually appreciating: the creativity, the craftsmanship, or the pleasing shape of a $1 reinforcer plate? With fillet brazed and TIG welded frames I may not have cared for the look of the joints, but had to admit that the work seemed less constricted by pre-fabricated parts.

Around the same time that my thoughts started to flow in this direction, I began to encounter an increasing number of modern, well-made bikes that were not lugged and, in some cases, not steel. Demoing the aluminum Urbana bike had a big effect on me. This excellent machine was nothing like the half-heartedly made bikes I'd grown weary of seeing in bike shops, despite using similar construction methods. The same could be said of the Paper Bike and Pilen I tried soon thereafter, not to mention custom welded bikes by ANT, Geekhouse and Seven. The association I'd formed between construction methods and quality had been erroneous. The flimsy bikes I disliked were such because they were made and assembled poorly, not because they were welded. I still preferred the look of lugs, particularly unique lugs. But my appreciation for the other methods of frame construction grew.

The growth continued as I developed closer relationships with a handful of local builders and began to better understand their methods. With this, my sense of aesthetics shifted. When looking at a bicycle frame's joint, I now see it as an embodiment of the work and creativity that making it involved, of the opportunities and limitations that were created by the chosen method of construction. This does not so much overshadow the look, as it gives meaning to the look. And meaning informs our subjective judgments of beauty.

Having now tried my own hand at building a bicycle frame, my thoughts on lugs have gone through yet another iteration. When asked what I think of them, what comes to mind is that I appreciate them making brazing easier. I don't appreciate how time consuming they are to work with and the limitations they place on frame geometry. That reasoning is entirely devoid of aesthetic sentiment, which worries me a bit. I don't want to stop "seeing." And I don't think that I will; more likely I am just a little tired now, and still overwhelmed from having gone through the process so intensely and quickly.

I remember how, after welding two bits of steel together myself, I tried to pry them apart a couple of minutes later. The strength of the connection took me by surprise. It felt like fusion (which, of course, it was), whereas a similar joint, when brazed, felt more like it held together with very strong glue. This doesn't necessarily mean anything, I know. But I would like to learn more, and I would like to learn it firsthand.

Indifferent is a negative word, so I would not say I am now indifferent to lugs. I like lugs, particularly unique ones. One of my crazy dreams is to design and cast a lugset of my own some day. Until then... I sort of like it all, lugs included.
Labels: framebuilding I'm building a frame lugs