The Tale of a Midtail Cruiser 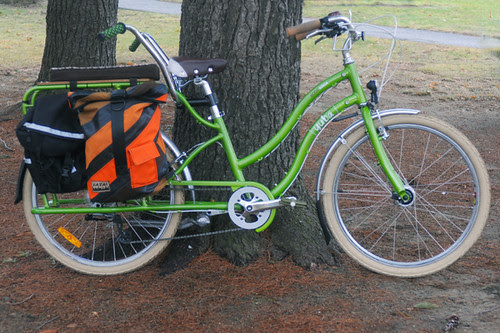 Traveling through the suburbs last week, I suddenly spotted something green and curvy zipping toward me on the opposite side of the road. It was a Yuba Boda Boda cargo bike - not a common sight around these parts. The woman astride it looked happy and carefree. As we passed each other, both of us waved with the zeal of true bicycle obsessionists, and yelled hello. I then spent the rest of the morning wondering who this mysterious woman was and how I could get a better look at her bike. But I didn't have to wonder long. Having recognised me, she soon got in touch and we arranged to meet up. 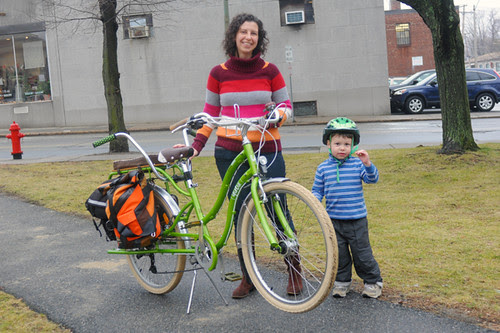 Josette is a local cyclist and mother of two boys, ages 6 and 3. She lives in a hilly outer suburb of Boston and works in a neighboring, equally hilly suburb. Her typical daily commute involves taking her younger son to preschool, as well as cycling to and from work, for a total of 13 miles plus errands. Josette got back into cycling as an adult a few years ago, and has since owned a couple of bikes, including a modern hybrid and a vintage English 3-speed. She now wanted a cargo bike that was both easy to ride and could handle two children. She tried several cargo bikes, before settling on the Boda Boda - a new "midtail cruiser" model from the California-based Yuba: The Boda felt easier to manage than full sized longtails, and the handling felt more intuitive than that of the Dutch bakfiets. Josette purchased the bike at Ferris Wheels in Jamaica Plain (Boston) and has been riding it since October. 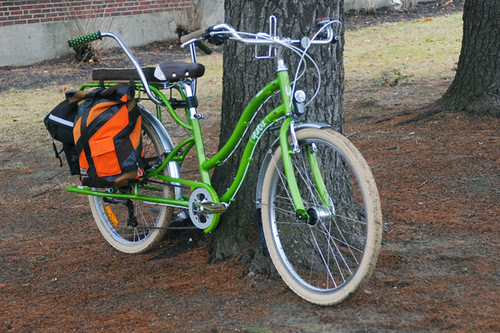 Yuba refers to the Boda Boda as a "cargo cruiser." Named after African bicycle taxis, this model was created in response to requests for a shorter wheelbase, lighter weight and lower stepover. On top of that, it promises casual handling combined with the ability to tackle hills. Featuring an aluminum frame, 26" wheels, fat tires, swept-back handlebars and 8-speed derailleur gearing, the Boda weighs 35lbs and is rated to carry over 200lb. There are two versions of this model: the Step-Through, shown here, is smaller in size and features a lower stepover. The base retail price is $999. 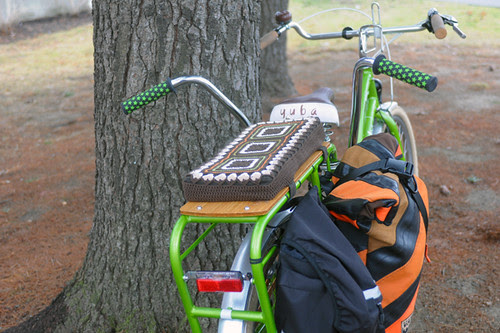 The midtail rear end of the Boda features an integrated rack with a bamboo platform and an optional "Soft Spot" pillow - handy for ensuring passengers have a comfortable ride. Josette personalised hers with a custom crocheted cover, which gives a charming and unique look to the whole setup. 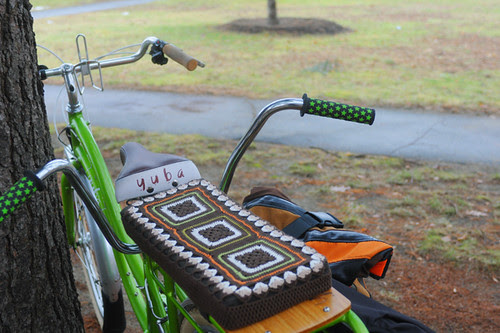 The platform as shown here can fit both of Josette's children. 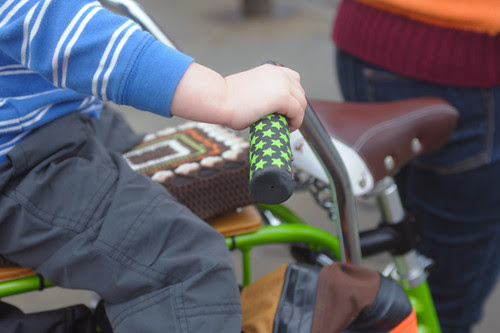 Although I only met her younger son, this picture illustrates how both boys fit on the bike. Josette's blog post on riding with kids provides more details about her experience. 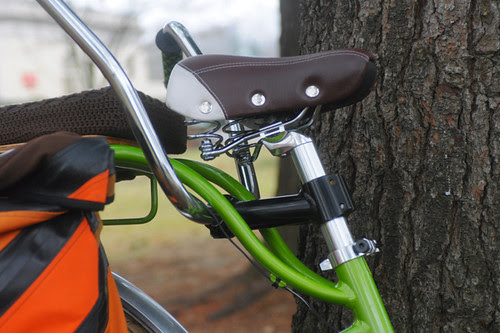 The "apehanger" style handlebars in the rear were an aftermarket addition, as Yuba's standard "Hold On Bars" did not work here. The main issue was that, given Josette's saddle height and the height of the rear rack, there was no way to install Yuba's standard handlebars so that they'd reach above the rack. In addition, the wider and more swept back apehanger bars make for a more accommodating and comfortable position for Josette's boys. 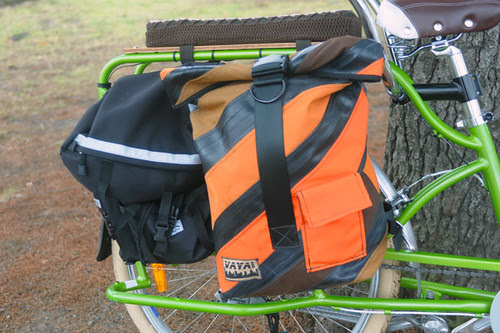 The Boda's rear rack height is an interesting topic. You can't quite see this in my pictures because the bags cover it up, but the Boda's rack platform sits unusually high. This is because the e-assist version of the Boda (aka the El Boda), has its battery stored underneath it. Josette's feedback is that the extra height of the rack feels suboptimal, both as far as weight distribution when carrying passengers and cargo upon it, and as far as saddle height adjustment. For example, very short riders may have difficulty moving the saddle all the way down despite the extra seatpost showing, because at some point the saddle will start to interfere with the rack. Also, because the handlebars had to be threaded through the rack, I was not able to raise the saddle to my optimal height when test riding this bike. Despite the quick release skewer, the setup shown here cannot be easily shared between persons of different heights.

This issue aside, the owner is happy with the carry capacity the Boda affords. In addition to allowing her to carry two children on top of the platform, each side of the rack accepts two full-sized panniers, or Yuba's own "Baguette Cargo Bag" (The orange bag pictured is a pannier hybrid bag from Vaya, made in NYC). The front "Bread Basket," rated to carry 50lb of weight, can be purchased for even more carry capacity. 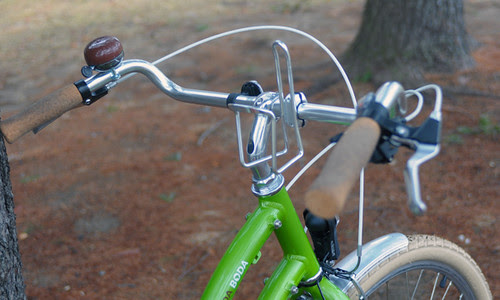 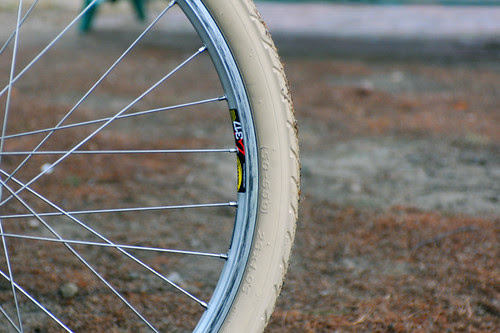 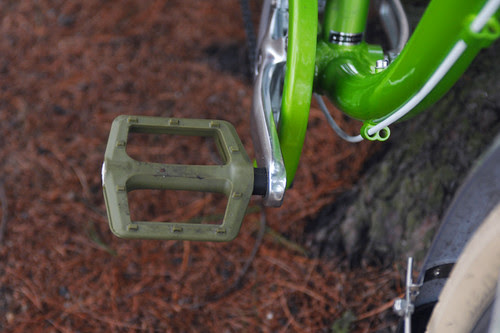 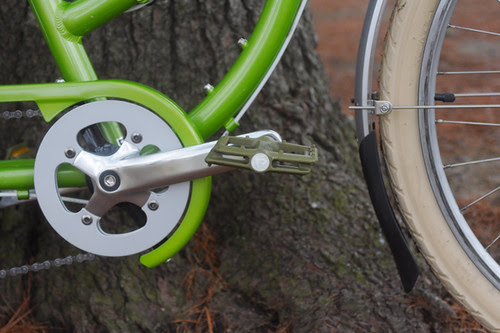 and a minimalist chainguards. 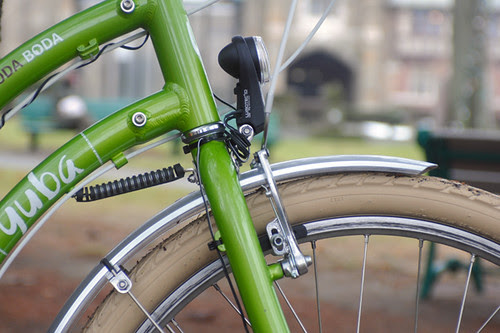 Fenders and a double-legged kickstand were added as accessories, as was dynamo lighting front and rear, and the front wheel "Deflopilator" stabiliser. 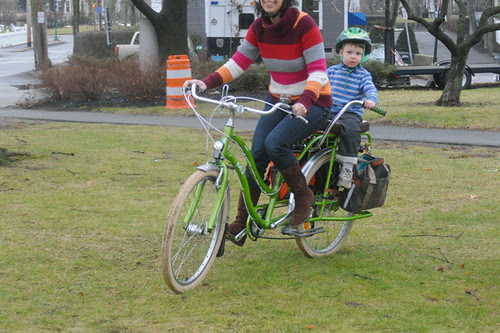 I took the Boda Boda out for a quick spin. Though Josette graciously offered to lend me her son, I did not feel comfortable with that plan, and just rode the bike with 3 panniers on the rear. Mostly I was interested in the feel and handling, so I did a short loop that involved a local hill.

This bike is a little strange to describe. If you've ever ridden a Northern European hybrid circa the mid-2000s (à la this), the position the Boda puts you in is very similar. The closest non-obscure equivalent I can reference is maybe the Breezer Uptown, but it's really closer to the European bikes. Mounting and dismounting, the stepover was indeed very low. There was no toe overlap with the front wheel when turning, although it was surprisingly close; not much clearance. Yuba does not provide geometry charts, but the cockpit area felt extremely compact, and there was something about the position of my butt in relation to the pedals (or saddle in relation to the bottom bracket, if you will) that I associate with a particular type of hybrid or cruiser type bike.  At the same time, I have to admit that the Boda felt light and speedy. And the low gearing allowed me to pedal it up a major hill without having to dismount (Josette tackles that same hill on a daily basis, and only has to dismount when both kids are on the back of the bike). The ride quality over potholes was nice and cushy. 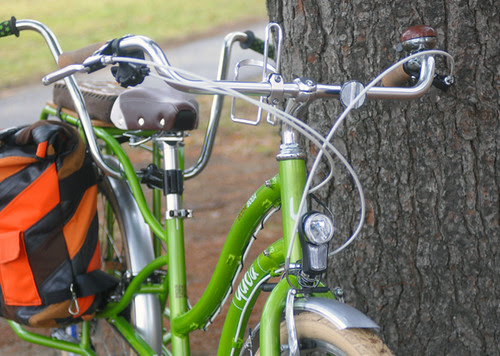 In essence, my first impression is that the Boda Boda is what it claims to be: a cargo cruiser with easy handling that is ridable in hilly areas.

Considering my recent test rides of the Xtracycle Radish, a comparison of the two is probably in order. The obvious difference is that the Boda is shorter and a bit lighter. This will make it more manageable for those who consider full longtail bikes unwieldy, but at the expense of giving up load capacity. The Boda has a somewhat lower stepover, which makes it easier to mount and dismount. As far as fit and handling, I prefer the Radish, simply because it feels more natural and intuitive for my style of riding. Others might feel differently. 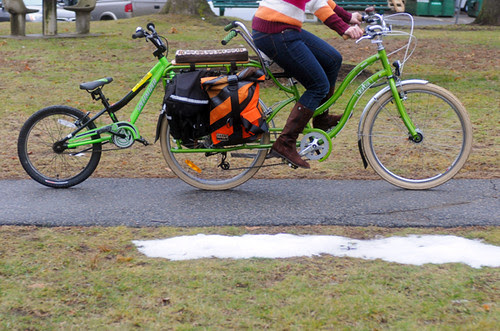 Having ridden the Boda on a more or less daily basis since October, the owner is pretty well used to it and enjoys the freedom of mobility it's given her. 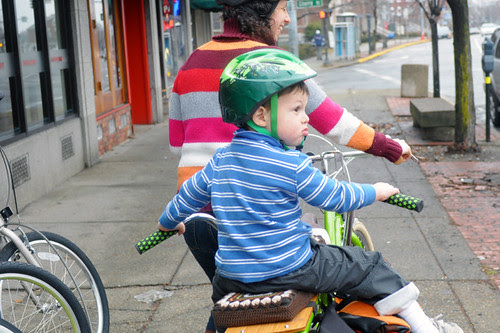 With her boys and without, Josette has ridden the Boda in all sorts of weather, though overnight she keeps it in her garage and during the day at the bike parking facility in the basement at her work. The bike has served her well in the course of daily use. Some words of criticism include the rear rack height, the delay with receiving some of the accessories (she is still waiting for the Bread Basket), and the fact that the price of each accessory adds up to make the true price of the bike, once it's fully equipped for commuting, nearly double the stated MSRP. Still, 3 months down the road Josette is pleased with her decision to choose the Boda over other cargo bikes. It suits her riding style and her lifestyle.
Labels: bicycle reviews cargo bikes test rides