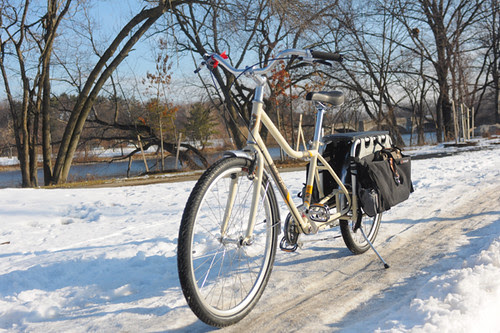 It was with some regret that I set off to return the Xtracycle Radish after a long term test ride. I had several errands to run and left early in the morning, rear bags filled with items to drop off in the course of my travels. The day was gorgeous, the air fresh, and the temperature not too low. More than a week had gone by since our last snowfall, and the multi-use river path looked like it had been cleared. I chose the path over the road, wanting to make the most out of my last ride on this bike.

We rode for a few miles along the plowed path, until gradually patches of uncleared snow and ice began to appear. I had the opportunity to get off the trail and rejoin the road, but decided to wing it. 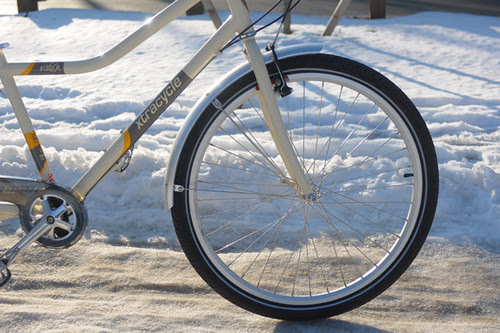 At length, we hit a section of the trail that was completely unplowed. The hard, crusted-over snow made for an uneven surface. I was not in an adventurous or experimental mood, as I had my camera on the bike without a great deal of padding to protect it. Still, I thought that I would try to continue riding and see how it went. Cycling on crusty, uneven snow feels not unlike cycling on rough dirt roads, provided that there is no ice. The more I try it, the more I like it, and I enjoy trying it on different bikes and tires to compare. The 26x2" tires on the Radish have some tread to them, and it was enough for me to feel a difference between how they rode on this kind of surface compared to the slicker Grand Bois Hetres. Bike choice aside, I think my ideal tires for this terrain might be some fat 26" or 650B knobbies.

It was a windy morning, and the wind picked up in the course of the ride. Naturally, it was a headwind, and the strongest gust coincided with an uphill stretch. I bent my arms until my face was just above the handlebars, put my head down and pedaled, eliciting cheers from a Super-Commuter headed in the opposite direction. Later on the road, a man at a stop light asked what it was like to drag "a bike like that" uphill. "You must be either very fit, or very miserable!" None of the above, mister. 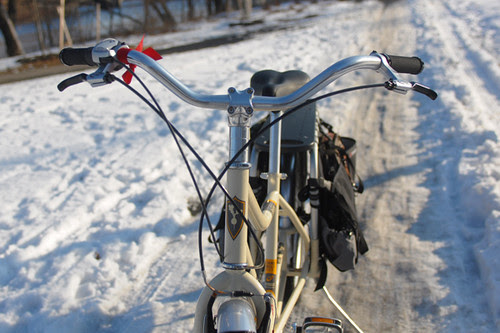 It's funny, because I could sense that I got a lot of respect every time I rode the Radish. But it was undeserved: The bike rides easy, and winter conditions did not reveal any weak spots in handling. I think that for those in cold climates contemplating cargo bikes, that's an important consideration. Cargo bikes have a way of making you dependent on them. And once that dependency forms, you want to be able to use the bike comfortably and safely year-round. I have not tried other cargo bikes in the snow, but I am glad to know the Xtracycle affords that freedom. Throw on some winter tires of your choice, and you may not even have to worry about whether the paths are plowed.

Against the backdrop of a winter wonderland I said farewell to my longtailed friend, and rode home on a vintage Raleigh Roadster - contemplating differences in bike handling and dreaming of future snow rides.
Labels: cargo bikes winter cycling Xtracycle