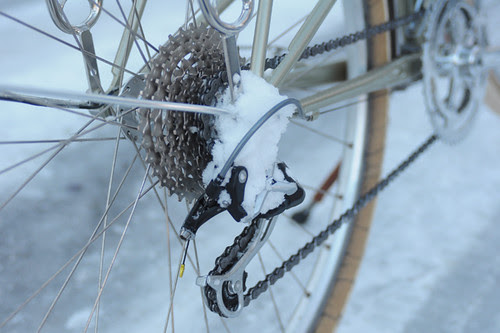 There are good reasons to recommend snow-proof bikes for winter cycling: powdercoat, hub brakes, internal gearing, single speed fixed. However, some prefer to stick with a regular bike through the winter, either for speed, economy or other reasons. That is my situation right now, and so far even limited riding in the snow has given me a pretty good showcase of things to watch out for. Here are some of them:

Snow and rim brakes:
This is an important one for safety. If you ride through snow and it builds up on your wheel rim, you can lose braking power on a bike with rim brakes. After riding through snow, I try to remove it from the front rim as soon as I notice any build-up, before it has a chance to freeze. This can be done fairly quickly: First I bounce the front wheel forcefully, then spin it as I wipe the snow off with a gloved hand.

Snow and the derailleur:
If your bike has derailleur gearing and you get the derailleur covered in snow, it can solidify and impair shifting. I was surprised to see how quickly snow can build up and freeze around that area; I guess there are a lot of convenient nooks and crannies for it to get into. To remove it, I shake off the rear wheel and free the derailleur from buildup with gloved fingers. I also try to stay in a low-ish gear in case the shifting goes. I would be reluctant to leave a derailleur-geared bike locked up outdoors in the snow for any length of time without some sort of cover.

Fender clearance:
This is not a popular opinion to have in transportation cycling circles, but fenders can be a pain. Unless there is a generous (as in vintage 3-speed/ Dutch bike type of generous) amount of clearance between the fender and tire, snow can get in there and does not always want to come out. If enough snow builds up, it can slow down the wheel's rotation or even bring it to a halt. I have experienced this on a couple of bikes now (granted, after intentionally riding them through snow for fun), bikes with what is considered good fender clearance for paved and dirt road riding in normal weather. Once snow gets between the tire and fender, it can be fairly difficult to remove on the road in cold temperatures; it doesn't want to be coaxed out. Better to avoid riding through soft snow in the first place.

Salt and rust:
Bicycles that are finished with anything but the hardiest powdercoat are susceptible to rust from the salted winter streets. The damage starts out as cosmetic - which is in itself sad if you have a nice bike -and can grow to become structural over time. I wipe my bike down after every ride on salted roads to avoid this. I would not leave a delicately finished bike outdoors in the winter for any significant length of time.

While not ideal, it is not impossible to ride a liquid painted, derailleur-geared bike with rim brakes and less than generous fender clearances in the snow, if you take care to watch for build-up en route and if you maintain the bike afterward. Storing such a bike outdoors in the snow is more problematic. Your bike parking situation at home and work could be the determining factor in whether going without a winter-proof bike is doable.
Labels: winter cycling