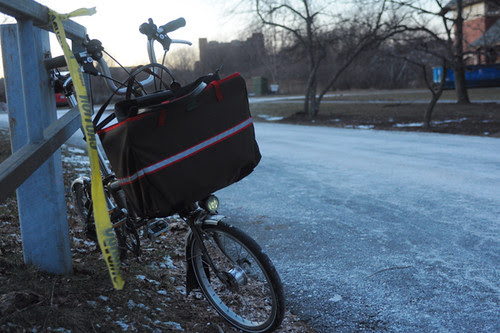 The past few days in Boston have been interesting. A snow storm was expected on Tuesday morning, and several towns pre-emptively salted the roads in anticipation. It did snow a bit, but a big storm never came. What did come was a stretch of severely cold, windy days. The resulting landscape has been one of the more bizarre sights I have ever seen along my commutes: white roads, white trails, white mist - all of it very much resembling snow, except that it's salt.

The overzealous road treatment has its benefits. Despite riding in sub-15°F temperatures in the suburbs after a mild snowfall, I never had to worry about sleek road surface conditions. It was wonderful actually: I had lots to do and my mobility was in no way impaired as it sometimes is on days like this. Even the trail along the Charles River was thoroughly ridable, which has been great for avoiding heavy traffic on the roads during rush hour.

Still, the drawbacks are impossible to ignore. The salting has been so extreme, that over the course of two days it's hurt my face, mouth and eyes. It isn't difficult to imagine what corrosive effects it must be having on vehicles, including bikes, and what damage it must be doing to the environment. Many locals have expressed concern over this, succinctly summarised on the Boston Streets website.

Boston Streets refers to the decision to salt roads as the “windshield perspective,” linking it to the assumption that "everyone gets around inside a glass-enclosed, climate-controlled vehicle" and believing that it shows "utter disregard for the pedestrians, bicyclists, dog-walkers, and water-drinkers among us." I am following this debate with interest, eager for an alternative yet effective solution. As a cyclist, I must admit that I have enjoyed the salted roads (and bike lanes and trails) for the increased mobility they have afforded me this winter, so it had not occurred to me to interpret the practice as car-centric. But I am concerned about the environmental and corrosive effects, as well as the possible harm to my health (what else do they mix with the salt, and is it good for me to be swallowing it every day?).

The real issue, as I see it, is that any city trying to make itself over as a "cycling city" - as Boston and other North American cities with harsh winter climates are doing - needs to have a plan not just for the warm months but also for the cold. Unfortunately, we do not. Boston removed the Hubway bike share stations in November, posting a "closed for the season" message on their website. The Charles River Trail is being plowed this winter not due to bike-friendly city policy, but to the sponsorship of New Balance (thanks guy), which is done mainly for the benefit of runners and joggers, not transportation cyclists.

I am conflicted about the salting of roads. I do not like to criticise unless I can offer an alternative solution, which in this case I cannot. Something to think about as I thaw my chapped, salt-burned face after this evening's travels. It's broodle out there.
Labels: winter cycling