Neato! Nice Porter You Got There... 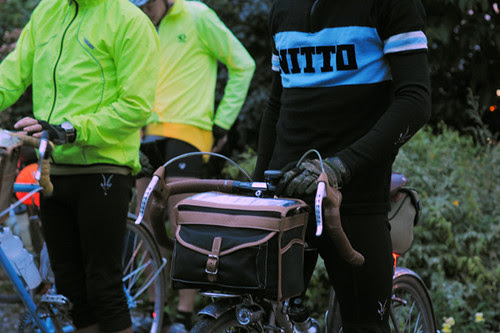 For those of us who spend more time reading and communicating about bikes on the internet than in person, sometimes we go years before hearing bike terms uttered out loud. And so we form our own pronunciation, discovering only later that it might not match the way others pronounce the same words. Largely this is because so many bicycle words are foreign in origin. Even if we know the original language, it is not clear whether the common pronunciation matches it or has been distorted.

I remember the first bike word I had to adjust from the way I said it mentally was panniers. When I first started seeing this term I assumed stress on the second syllable (rhymes with veneers) and found the anglified stress on the first syllable jarring (I still can't get over that the English will pronounce ballet as "bally"). But I switched early on, and now PAN-iers sounds perfectly normal - though I still pronounce it the other way when referring to the French skirt hoops.

With other words, I cannot switch over. At some point I realised that many people pronounce porteur as "porter." Porter bike. Porter bars. Porter rack. What? It's porteur, rhymes with connoisseur!

English speakers generally pronounce mixte as mixtee, not "meext" as in the original French. Although I notice that some - not knowing French but wishing to pronounce it in what they believe to be the correct way - say mix-TAY, as if the French word had an accent aigu at the end (mixté). I have always said it the anglicised way, just because "meext" sounds strange to me as a noun.

Then there are the Japanese manufacturers. In my head, Tange sounded like the first part of the word "tangible," and I was pretty sure I'd heard it said that way. Later I started hearing "tahn-gay."

And I've always mentally pronounced Nitto like "neato," later surprised to hear bike shop mechanics pronouncing it to rhyme with ditto. They in turn found my way amusing. "Really, neato? I guess they are kinda neat-oh components!"

Dia Compe seems to be a free for all. I have heard dee-yah-coump, dee-yah-coum-pay and Diacom.

Of course all of this is more entertaining than anything. Languages get mixed and terminology evolves; there is not necessarily a "correct" way to pronounce any of this stuff. Though I am still not sure about dynamo... Stress on the first syllable or the second?
Labels: bicycle industry silliness