Variations on Red and Green 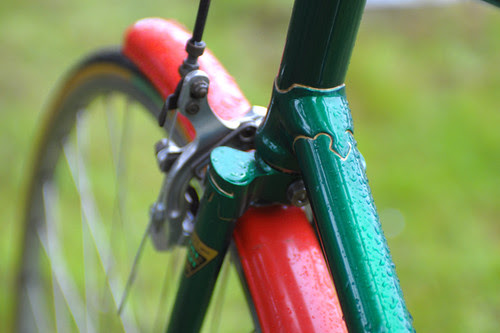 Growing up, red was my mother's favourite colour. And my mother was a tirelessly creative woman back then. She sewed, she knitted, she made things. Consequently I was dressed in red sweaters and coats. I slept under a red patchwork quilt. You get the idea. I did not know how to communicate my dislike for this colour. When I was 3 years old, I was gifted a red tricycle and stunned my parents by breaking into tears at the sight of it. I loved riding that trike. But when no one was looking, little by little I began trying to scrape the paint off. My parents grew concerned and eventually got rid of it. They must have thought I was eating the paint.

As a teenager, I gravitated toward all things drab. This was the '90s grunge era, so that was easy enough. Army-navy stores, denim, plaid, combat boots. I rode a matte black bicycle then, and even peeled off its bright decals. When asked what my favourite colour was, I did not have an answer. In college I wore black. I made large charcoal drawings. I took black and white photos.

Sometime in my twenties I saw a weathered old bicycle locked up to a farm gate by the river. It was a lady's bike in the signature English shade of bottle green, and the weak East Anglia sunlight was hitting it just so. The enamel paint had a special quality to it that made it resemble an aged candy wrapper. I saw it and I knew right away that I liked it. As an adult, it was a thrill to learn that I had a favourite colour after all. I began to experiment, to chase after the perfect green. Somewhere between sage, chartreuse and olive, this ideal shade existed and was waiting for me.

After that I relaxed about colour. Blues and lilacs began to sneak their way into my surroundings, mingling nicely with the greens. Accents of pinks and reds appeared.


A couple of summers ago, I was staying in Vienna and looking to buy a vintage racing bike to bring home. A friend found me the perfect one and took me to see it. It was a bright red Moser. I remembered the trike of my childhood and laughed. "I love the bike, but I hate red." I got the Moser anyway and rode it for two years. It wasn't just red, but an unusual shade of strawberry with a subtle golden sheen to it. Everyone complimented the colour, protesting when I revealed my plan to eventually repaint the frame. "But the red is great, and it's so you!" Soon I began to receive red articles of clothing as gifts. I remembered how, as a child, I hated being known as the girl in the red coat, the girl on the red trike. But now it just struck me as funny. I still dislike red, but I guess I no longer think that's important.

I talk to lots of people about their fantasy bikes, or bikes they are nostalgic for, or bikes that simply stick in their memory for some reason. Red bikes and green bikes are mentioned more than any other kind. The colours play an important role in the story, but for reasons the story teller cannot clearly express. They will just keep repeating that it was a red bike, or a green bike, stressing the colour as if this information is pertinent to how special the bike was. It's not always a straightforward, cohesive story, just like mine is not. I suspect a lot is left out, possibly the most relevant parts. Of course we could break it down to the basics. Colour, motion, emotion. Excitement, tranquility. Stop, go. Red bikes, green bikes. But who wants to see it like that.
Labels: holidays stories