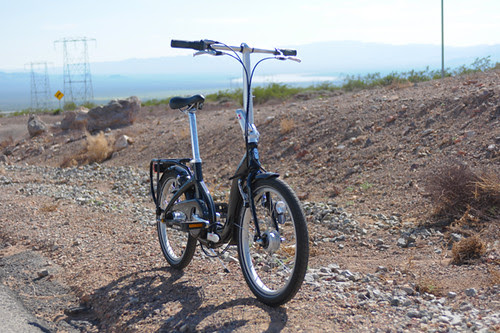 While we are on the subject of small wheel bicycles, I wanted to share my impressions of the Tern Swoop, which is due to hit bike stores in the US any day now. I test rode the Swoop at the Interbike Outdoor Demo earlier this year. This was the first Tern bicycle I've tried. 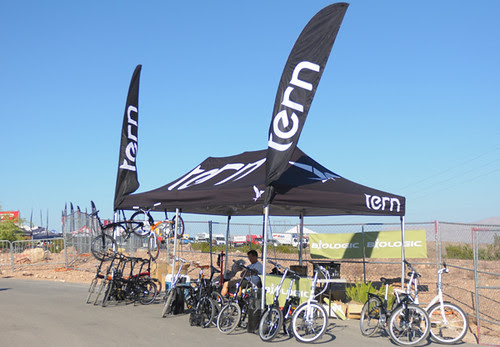 Tern is a Taiwanese manufacturer of folding bikes, whose 2011 launch was filled with drama. The company is owned by the son and wife of the owner of Dahon. When they left Dahon to set up Tern, the feud and back-and-forth lawsuits that followed fed the industry rumor mill for some time. But it seems that Tern is here to stay. Their initial models were met with positive reviews. Now in their second year of production, they've expanded their lineup, and that is how I encountered the Swoop. 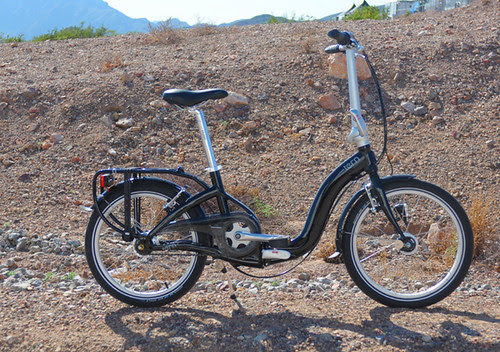 The Tern Swoop is an ultra low step-over model, optimised for commuting in comfort. Specs include an aluminum frame, hi-ten steel fork, 20" wheels with fat tires, v-brakes, racks and lighting, and a quick and easy fold. The bike I rode was the Di7 model, which features a Shimano Nexus 7-speed hub. There is also a SRAM 2-speed Duo model. 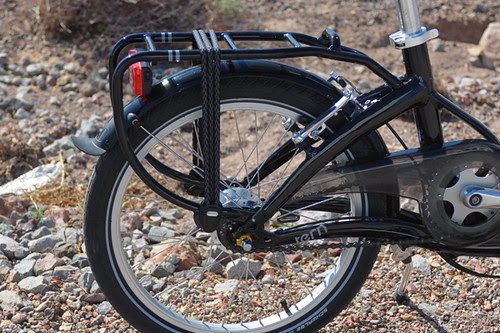 The Swoop is a commuter-ready bike. The low stepover makes it easy to mount and dismount for everyone. The fenders and chainguard will keep clothing clean. The wide tires (Schwalbe Big Apples) make for a cushy ride. The generously sized rear rack and built-in cords allow for easy transport of luggage. In addition to the rear rack, there is a luggage socket into which a klick-fix adapter can be installed. This system works with a variety of front bags and baskets. 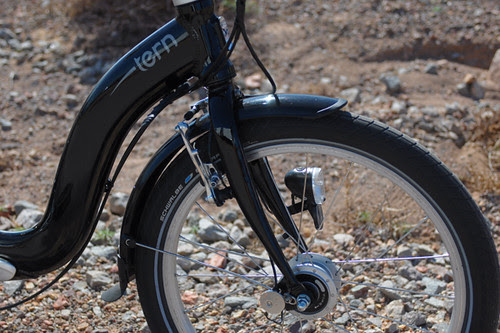 The bike also comes equipped with dynamo lighting, powered by the BioLogic Joule 3 generator hub. This hub has an on/off switch on the side, which is said to eliminate drag ("...in the 'off' position, the magnets are pulled away from the core of the hub"). 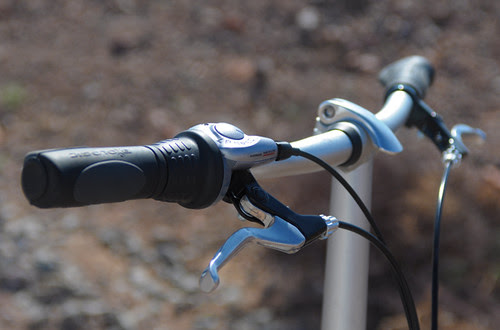 The Swoop's positioning is relaxed and upright, with the flat, ever-so-slightly curved back handlebars set quite high for all but the tallest riders. 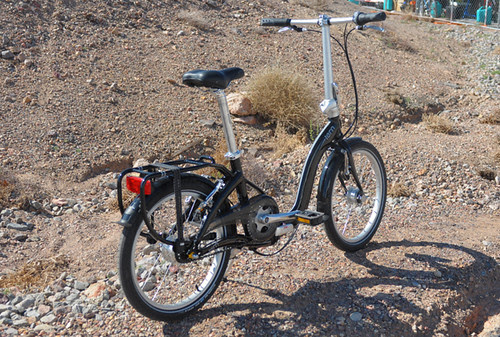 I rode the Swoop around the Outdoor Demo loop a few times, as well as on dirt for a bit. In total this amounted to 2-3 miles, including some uphill stretches. The bike felt comfortable and relaxed, not unlike a full sized European city bike. The fat tires drowned out bumps very nicely. Unlike some of the other non-Brompton folding bikes I've tried, the Tern Swoop felt pleasantly un-flimsy. I did not sense any play in the fold joints, nor did I feel flex in the frame while cycling. The ride quality was stable and novice-friendly. The bike cannot be called sporty exactly, but it rode faster than its looks suggest, and the gearing was low enough to make the uphill stretches painless, as well as to handle more serious inclines if need be.

As far as comparing it to my Brompton, the Swoop is a more relaxed and upright bike. It rode a bit slower, and somewhat less maneuverably. Without a front load, the steering felt considerably more "normal" than Brompton's distinct (some say "twitchy") steering.

One thing I should note, is that visually the Tern Swoop resembles the Dahon Ciao, which I have not tried. Tern's claim is that the Swoop is a stiffer ride, eliminating flex in the frame, folding joint, and "handlepost." Among other differences is the Swoop's carry handle, and slightly faster fold. 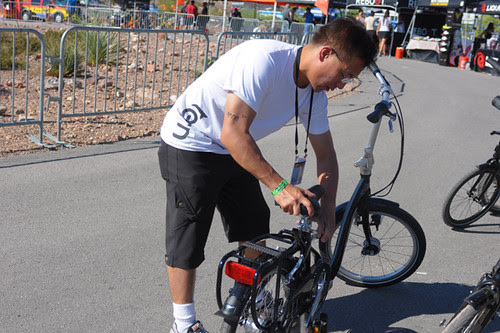 Tern representative Eric Mah demonstrated the fold for the camera, and I also tried it myself. The process is similar to Brompton's, so it felt familiar and intuitive. 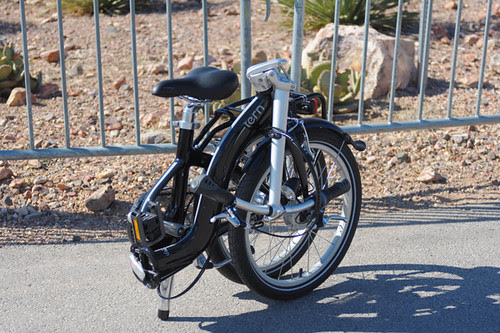 The folded size, however, is considerably larger than Brompton's (Brompton: 23" x 22.2" x 10.6"; Tern Swoop: 31.1" x 28.3"x 15"). At over 30lb, the Swoop is also noticeably heavier than a similarly equipped all-steel Brompton (which, according to the CleverCycles configurator, would come in at 26lb, including dynamo lighting and rear carrier). As the Brompton is already borderline for my being able to carry it comfortably for longer than a minute at a time; I would struggle trying to do so with the larger and heavier Tern. That said, Terns are still among the most compact and lightest folding bikes. 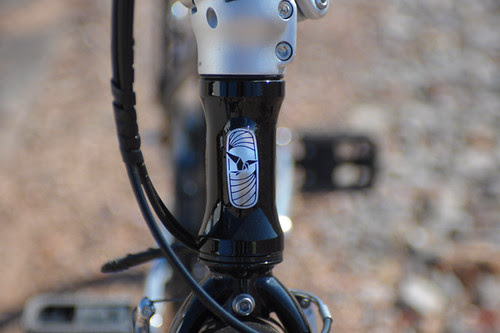 The announced retail price for the Swoop is in the $900-$1,150 range, including the rear rack and lighting. The solid build, stable ride, ultra low stepover, commuter-ready features, and easy foldability make it worth considering for those seeking a compact urban transport bike. Overall, the Swoop seems to be a good value. I am curious to see how it will be received once it hits the bike shops.
Labels: bicycle reviews small wheels test rides