Small Wheels and a Belt Drive: the Moulton TSR2 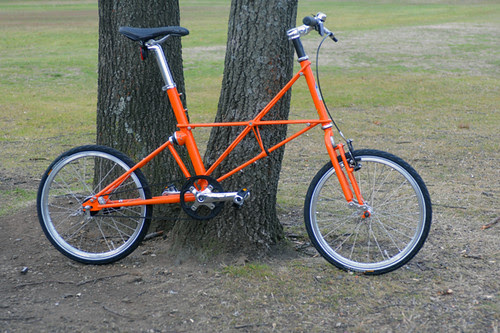 Despite seeing plenty of Moultons, old and new, over the past several years, I cannot get used to the sight of these bicycles. The "spaceframe," resembling an elaborate truss bridge, is like a puzzle that both intrigues and frustrates me. I don't know why, but that is the reaction I have to these bikes. Briefly riding a Moulton two years ago brought me no closer to forming a more defined impression, and it took me until now to work up to trying it again. This Moulton is Jon Harris's personal bike and it is a TSR2 model: featuring a 2-speed kick shift drivetrain with coaster brake and belt drive. 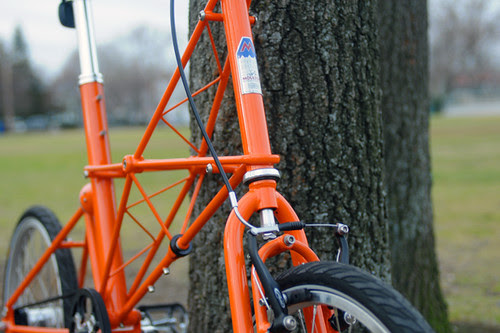 Founded in 1962, Moulton is an English manufacturer that championed the concept of small wheeled bikes. I will not delve into the history here, as I have already done this in an earlier post. You can also read about it on the company heritage page, as well as on the Moulton Bicycle Club website. Today, Moulton bicycles continue to be handmade in Bradford-upon-Avon, England, offering a number of road and city models. [edited to add 10th Dec. 2012: read this morning the sad news that Dr. Alex Moulton, the founder of Mouton Cycles, has died at the age of 92.] 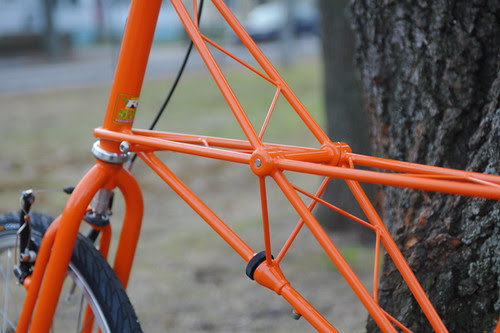 Following the original F-frame, the spaceframe design was launched in 1983 after years of research and development. The intent was to create an extremely stiff, performance-oriented frame. The adjustable suspension in the fork and rear triangle was designed to counteract the resultant harshness of ride quality. 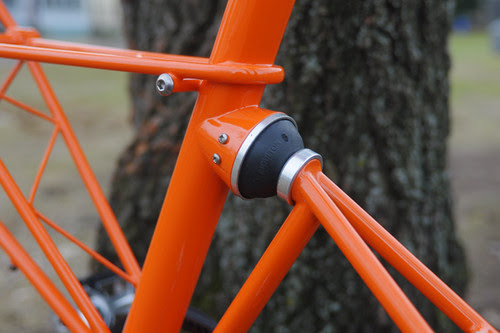 The combination of frame stiffness and dampening is said to provide a uniquely responsive and comfortable ride. 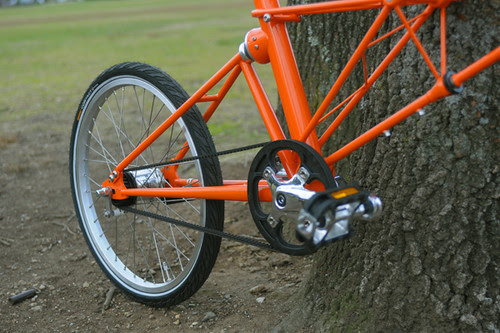 At the top of Moulton's lineup are state of the art racing bikes, but the TSR models are its low-key offerings. The TSR2 is the humblest of them all - deigned as a minimalist, low-maintenance city bike with hub gears and a belt drive. 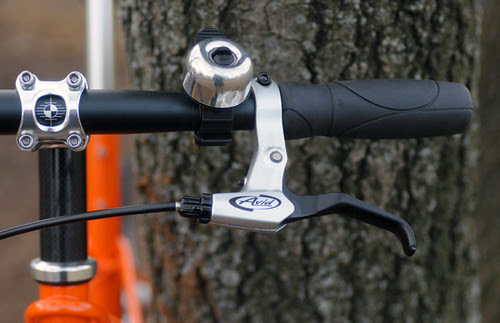 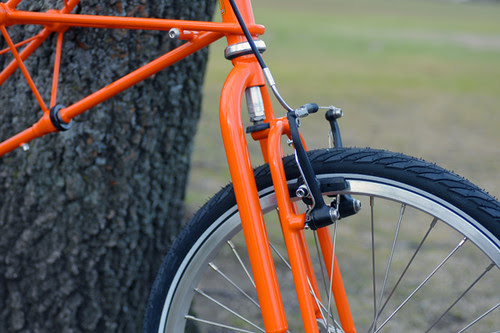 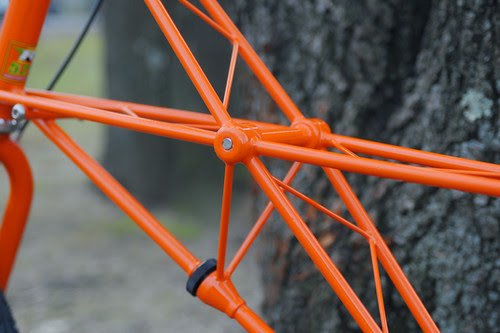 TSR frames are separable: Removing a pin in the center allows the frame to disassemble into two halves for ease of transport. While not a folding bike, this feature makes it convenient for travel. 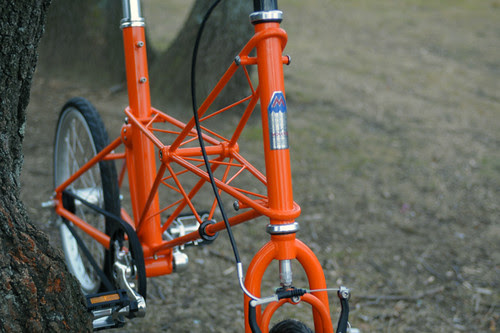 I rode the Moulton TSR2 on two separate occasions, several miles each time. Congruent with the manufacturer's description, the bike felt stiff and responsive. Even this 2-speed city model is not a cruiser or a small wheel shopper exactly. The positioning is aggressive, and the handling is similar to that of a roadbike retrofitted with straight handlebars. The adjustable stem makes it easy to change handlebar height, accommodating riders of different sizes. While the fit worked well for me with the handlebars set level with the saddle, I did not like the flat and narrow bars that are standard with the build. But I understand this is possible to change.

As far as handling, the bike accelerates quickly, holds speed nicely, and is responsive to pedaling effort. Those who like fast and aggressive, yet upright bikes, will enjoy this. The ride quality did not feel harsh on bumpy and pot-hole ridden roads. I could feel the suspension in the front and rear, but could not decide whether it was too much for my taste or just enough. 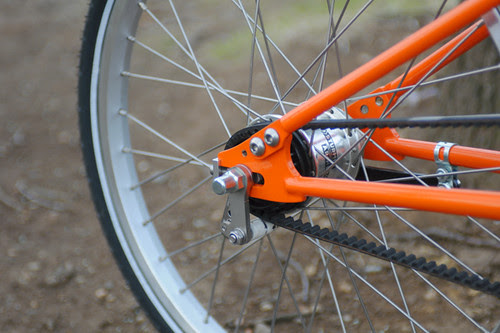 The TSR2's dropouts are split to accommodate the belt, which cannot be separated the way a bicycle chain can.  This is the now third bike I have test-ridden with a belt drive (see the others here and here). Unlike the previous times, this is a Delta belt drive and not a Gates carbon drive, but in the limited context of the test rides, I was not able to discern any difference. The belt was smooth and quiet.

The TSR2 is the second bike I have test-ridden with the Sturmey Archer 2-speed kick shift hub (see here for detailed impressions). This hub - also known as the Duomatic - is unusual in that it both brakes and shifts via back-pedaling: You push back lightly to switch gears, and you push back harder to brake. The Duomatic is a lot of fun, though I would not choose it for my own bike. In particular, the coaster brake action does not feel right to me on a bike with positioning and handling as aggressive as the Moulton's. That said, I know others who run this hub quite happily on bikes with drop bars, so it really comes down to personal preferences. 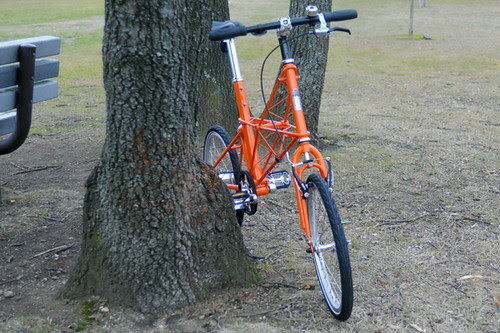 The Moulton TSR2 can be accessorised with fenders, as well as custom front and rear racks and bags. Considering it is a city bike, I would have liked to see these features included. This would allow me to get a sense for how convenient it would be to carry my stuff on this bike and what effect the load would have on handling. As is, I have no idea. There are also no provisions for lighting.

The Moulton TSR models are worth considering for those looking for a compact, small wheel bike that is performance oriented. Handmade in England and famous for their engineering, Moulton bicycles are costly, with TSR models starting at $1,600. My favourite aspects are the compactness, the separable frame, and the handling. Though this bike has become less of a mystery to me, I am still mesmerised and confused by the spaceframe when I see it, unable to decide whether I think it is wonderful or ridiculous. If the opportunity presents itself, I would like to try a Moulton with derailleur gearing and provisions for carrying luggage. Many thanks to Harris Cyclery for this and other Moulton encounters.
Labels: bicycle reviews small wheels test rides