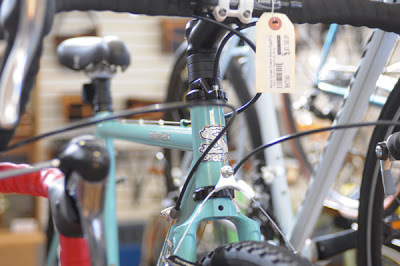 In the comments of the previous post, a reader pointed out that the comparatively low MSRP of the frameset I described was not such a bargain, considering the likely cost of the complete build. Depending on the context, I both agree and disagree. So I'll take this opportunity to discuss the benefits, as I see them, of buying a frameset and building it up yourself vs buying a complete bicycle.

When a manufacturer releases a bicycle model as a complete build, the price of the bike bundles together a number of things: the frame and fork, the components and accessories, and the labor involved in assembly. The price of the bike will be significantly lower than if you were to pay for all of these things individually. Assuming that you are happy with the components included in the stock build, this makes the bike a great deal compared to buying a frameset only and starting from scratch. You save money on components, you save money on labor, and on top of that you get the immediate gratification of having a ready to ride bicycle straight away.

But keep in mind that the more changes you make, the less of a great deal it will be - especially if you cannot do the work yourself and will need to pay extra for labor. Give particular consideration to whether you are happy with the stock drivetrain and shifting system. Changing this on a stock build can be costly. If the stock bike comes with 700C wheels and you want 650B, a conversion could be pricey. If you want dynamo lighting and the bike does not already have it, you will need to rebuild the front wheel with a dynamo hub, or replace it. If the stem length and handlebar width are wrong for you, you will need new ones. At some point, it might be more cost-effective to start from scratch.

When a bicycle model is available as a frameset only, it is an opportunity to assemble the bike according to your needs from the start. You can choose the exact gearing you want, your preferred model of levers and brakes, the correct stem length and handlebar width, and a comfortable saddle. You can integrate dynamo lighting into the build from the get-go. In the event the frame is compatible with more than one wheel size, you can choose the wheel size that suits you, instead of executing an aftermarket conversion. Going the frameset-only route is an especially great deal for those who are DIY tinkerers (or live with one) and can do the work without the help of a bike shop, and for those who already have a bunch of components lying around waiting for a frame.

But before buying a frameset, it is a good idea to make sure the bike you want really is different from an available stock build. Oftentimes novice buyers cannot distinguish between what's a big deal to change and what isn't. For example, if a bike is missing fenders and racks, you can add them without making changes to the existing build, thereby still enjoying the savings of starting with a complete bike. Also, if it's a matter of stem length and seat post setback, some bike shops are willing to swap those at no extra cost. Finally, the stock models are usually set up generically - with plain handlebar tape, plastic pedals and unsightly reflectors. While this does not look as nice as a custom build, you can easily and inexpensively personalise the bike without needing to start from scratch.

One thing to add, is that a direct cost comparison between framesets and complete builds is not always possible. While some manufacturers offer both options, others offer only one or the other. The make and model you choose in the first place might depend on which you prefer. For heavy-duty city bikes, there are now plenty of complete stock models available that require few if any aftermarket alterations. Ditto for standard roadbikes. As for 650B mixtes, and other non-mainstream specimens, not so much.
Labels: bike shopping DIY