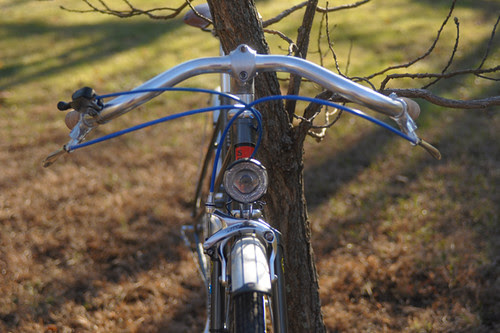 Over a year ago, I wrote about a 650B Soma Buena Vista mixte that a friend built up for his wife. It was a large (58cm) frame that I was able to ride after lowering the saddle. This time I tried another 650B Buena Vista, and the smaller (50cm) frame was built up very differently. The difference between these two bikes makes me appreciate the role that sizing, fit and component selection play in the "personality" of a complete bicycle. 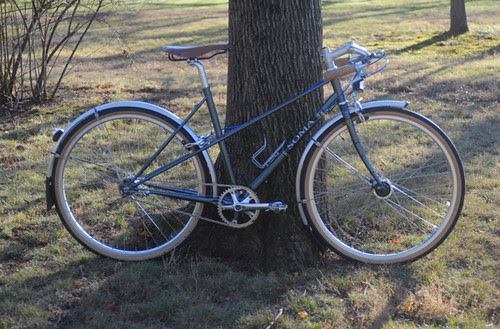 When velo-celebrity Bekka (aka bikeyface) began pining for a mixte, I suggested the Soma Buena Vista because of its reputation for versatility. B wanted a "non-girly" mixte that was aggressive yet comfortable, upright yet not too upright, classic yet modern, and to top it off, easy on the budget. I believed the Buena Vista could deliver these properties and volunteered to help "curate" the build, which was undertaken by Jim at Harris Cyclery. 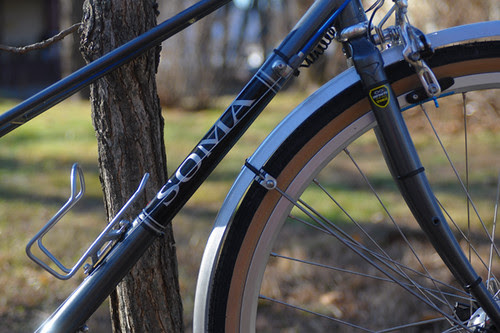 The charcoal frame is the same as on the bike I reviewed previously. It is a nice looking gunmetal silver. The decision to go with 650B wheels was made in order to fit wide tires. 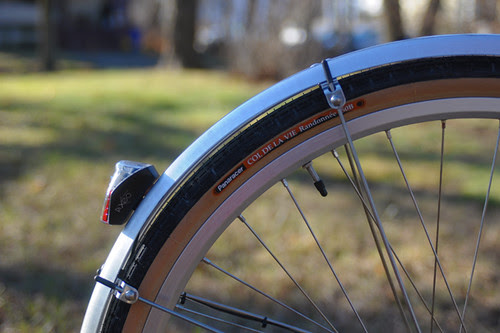 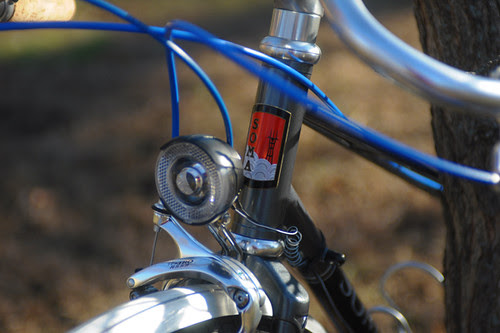 The wheels were built up with a dynamo hub in the front, the cables for the lighting routed using this method. 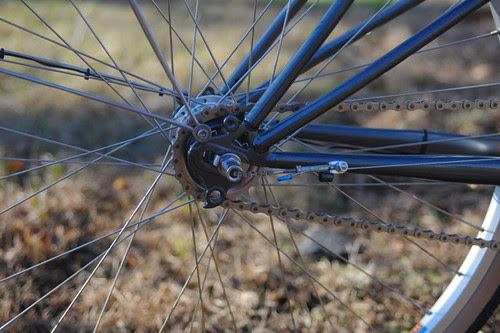 The rear wheel was built around a Sturmey Archer 3-speed hub. The Buena Vista's horizontal dropouts allow it to be set up either with a derailleur, internally geared hub, or single speed drivetrain. B shares my dislike of many-geared hubs, but did not want a derailleur on a mostly-urban bike that would spend much of its life outdoors. She considered single speed initially, but eventually settled on 3 speeds. I think this was a good choice, considering how she intends to use the bike. In my experience, 3-speed hubs are efficient and keep the weight down, while still offering some gearing versatility. 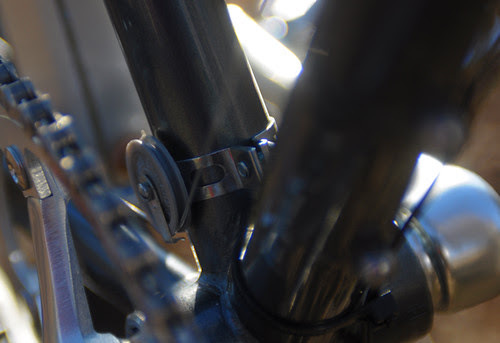 The Sturmey Archer pulley is hidden above the bottom bracket and adds a touch of the archaic to the bike. 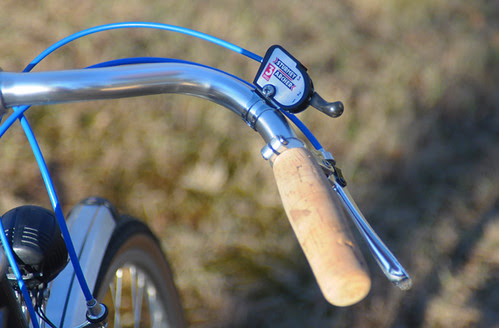 B wanted to try the trigger shifter, and I am curious what her verdict will be (I love them, but they are not for everyone). The Rivendell cork grips and the classic lines of the Tektro FL750 levers complete the old-school charm. 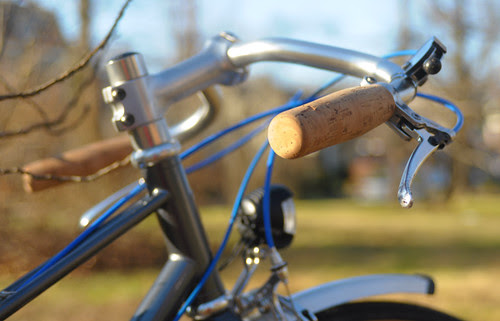 But charming need not mean docile. We set up the North Road handlebars aggressively, upside down and with a 10cm stem. 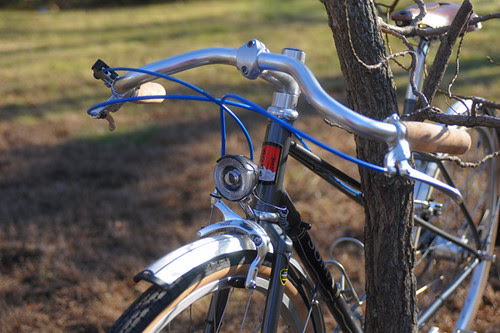 The Nitto North Roads have a dramatic drop, so flipping them over makes the bike très vroom-vroom. Not sure what the owner would think of this position, we left enough steerer to move the bars either up or down. 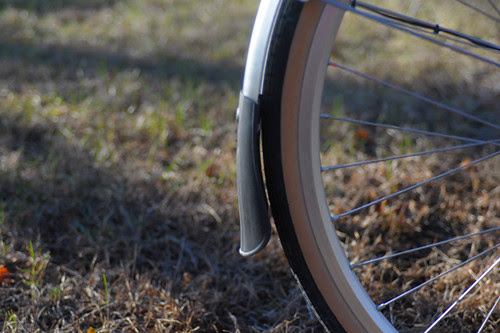 For fenders, B specifically did not want fancy-looking hammered things. As a more modern and less costly solution, we went with SKS. The ones designed for 700C work fine with 650B wheels. We chose the Longboard version, with mudflaps. 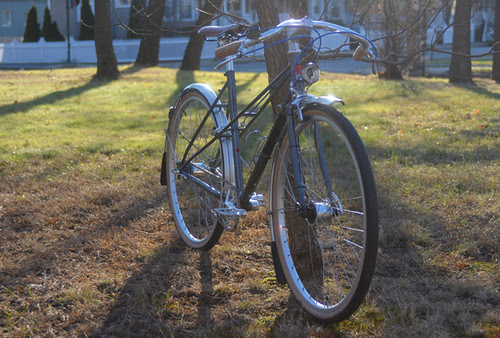 If I don't say so myself, I think the complete bike came together nicely. It suits the owner's preferences, both functionally and aesthetically. In the near future, she plans to install a rear rack and a small chainguard, but otherwise this is the finished state. Being now in posession of the bike, B really likes it so far. But I will wait some time before reporting her impressions.

As far as my impressions, the ride exceeded my expectations. Basically: vroom. Super-responsive, quick to accelerate, fast rolling. On flat terrain, the bike moved with me, almost effortlessly. And I'd almost forgotten how much I love upside down North Roads. Mount them low enough and with a long stem, and you can attain a forward lean similar to that of drop bars, but with the gripping style of upright bars. I love this position for riding in the city. 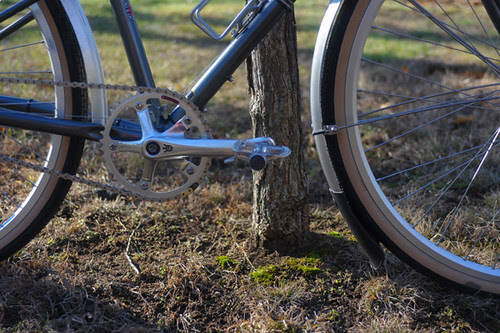 With the Buena Vista's sporty setup, the 3-speed drivetrain might really be enough for the owner's needs, especially considering that she is great at climbing out of the saddle. The gearing we chose worked well for me, with a significant hill easy to tackle in first gear seated. But it was really educated guesswork on our part, and if B wants to change the rear cog or chainring in future, this can easily be done.

As far as toe overlap with the 50cm Vista frame, this will depend on your shoe size and on whether you have fenders. I experienced a bit of it, but not much. If you build up the frame as a roadbike, fenderless, and ride in clipless pedals, there is a good chance of no TCO. In any event, the owner is not bothered by it. 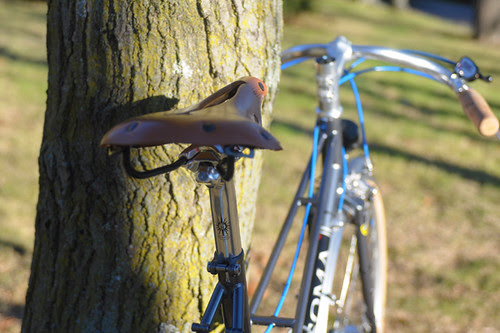 Depending on whose fit philosophy she follows, a woman of my height could end up on either the 50cm, 54cm, or 58cm Soma Buena Vista. Having tried the extremes of this spectrum, I believe that either size can work, depending on what qualities you are looking for in the bike. When I tried the 58cm Buena Vista last year, its long virtual top tube and high, wide, swept-back handlebars made it feel like a lightweight, faster version of a Dutch bike. By contrast, the 50cm Vista with its low, narrow, upside down North Roads felt like the lovechild or a modern roadbike and a pathracer. Go large for more tame, upright. Go small for more aggressive, roadish. In each case, the bike felt stable and the ride quality was pleasant. At $499 MSRP for the frameset, this fun and versatile machine is a good value.
Labels: bicycle reviews bikeyface mixte Soma test rides