Trolling Around in 650B 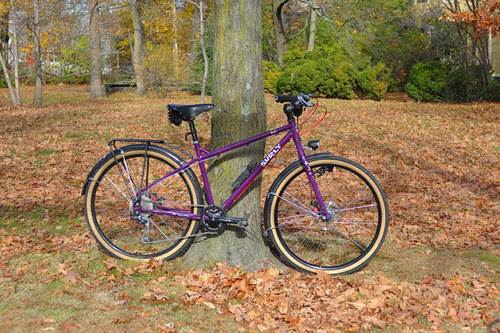 While Surly offers a range of practical, attractive, versatile bikes that riders everywhere love, none of them I find particularly appealing. Instead, I seem to be drawn to their weirdest and most extreme creations: their fat tired monsters. So naturally, when I saw Susan's new Surly Troll, I was delighted. Sure, it wasn't a Pugsley, but it was nonetheless glorious. 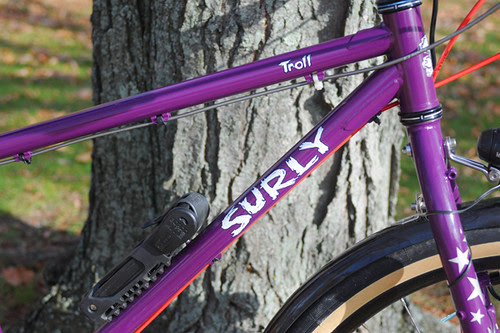 The Troll is a 26" wheel steel mountain bike with clearances for 2.7" tires. Built with eyelets for fenders and racks, it can also be set up as a commuter or utility bike, as well as an off-road touring bike. 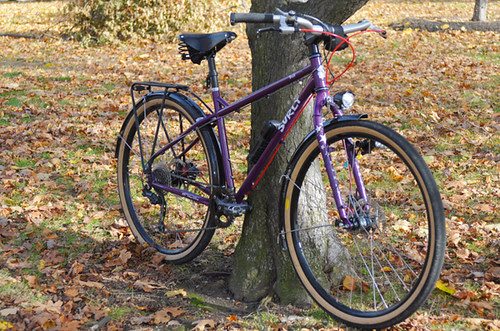 Susan built it up for all of the above, converting it to 650B while she was at it. 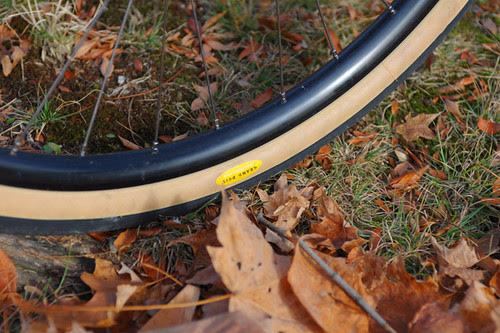 The tires are of course the 42mm Grand Bois Hetres. I realise now that I forgot to ask why Susan chose this wheel size, so normal it has become around these parts. 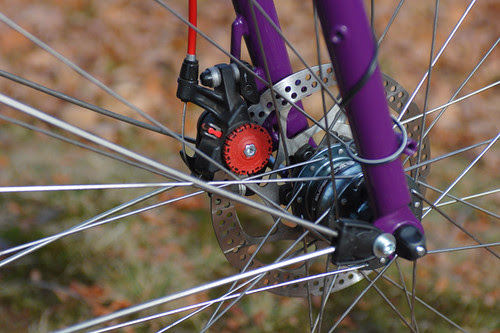 The Troll frame can be set up with cantilever/v-brakes or disc brakes - though I think the 650B conversion leaves only the latter option. 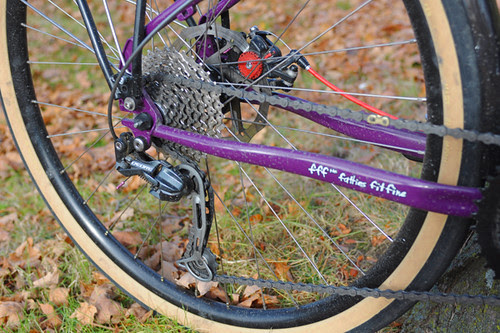 The Troll features interesting dropouts that I have not seen before. They are horizontal and resemble track ends, yet made with a derailleur hanger, making it possible to build the bike up with either hub or derailleur gearing. 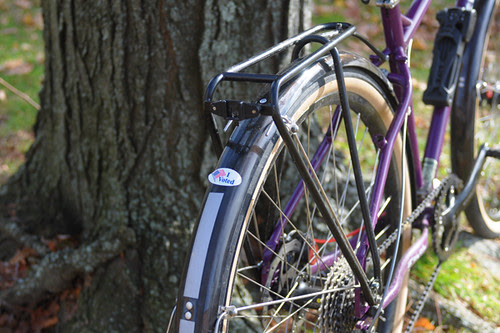 Susan has the bike outfitted with fenders, the Tubus Fly rear rack, 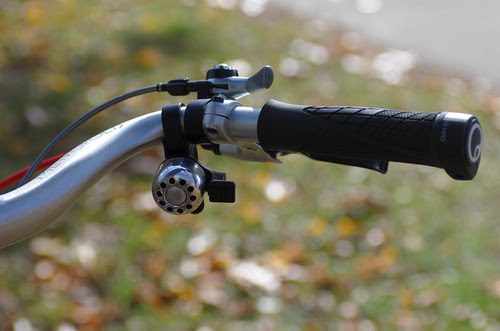 the slightly swept back Metropolis handlebars, 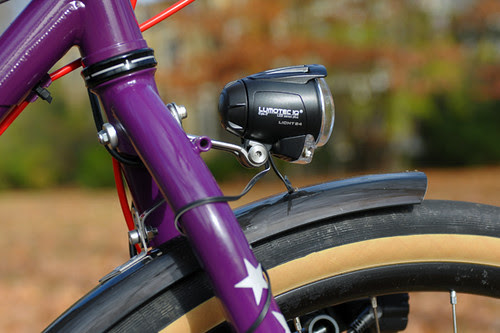 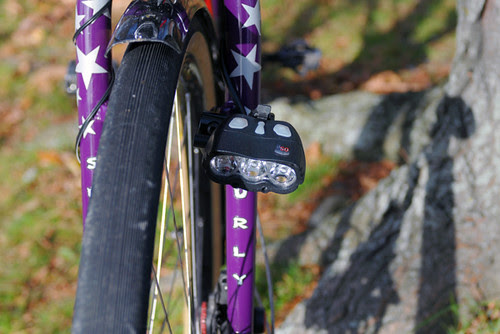 and one of those crazy super-bright headlights that point down to illuminate trails at night, powered by a battery pack. 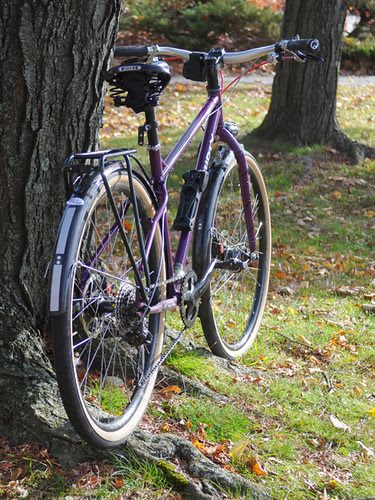 There is something about the way this bike is set up that seriously excites me. I look at it, and I want to do "that" kind of riding, whatever that is. An overnight tour along pitch black dirt trails maybe?

Susan encouraged me to try the bike, and I did. The brief test ride proved to be surprisingly informative. The bike rode smoother than I expected. Very nice in fact. The Troll is not a lightweight bike, and it is not fast on the road. But it felt maneuverable in tight spaces and was not as difficult uphill as I expected. The stepover of the frame felt lower in practice than the images suggest, making it easy to hop off the bike without having to swing my leg over the back (I should note that I rode the bike with the saddle about an inch higher than shown here). There was no hint of toe overlap even with the 650B wheels. The disc brakes worked well, though I tried them in a very limited capacity. 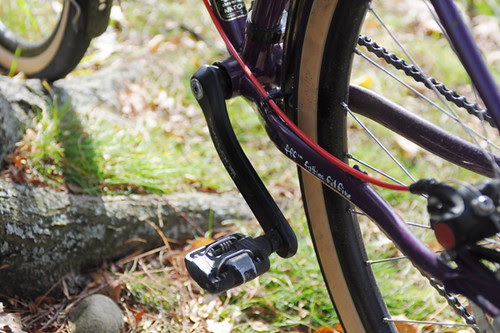 The one drawback of this bike for me was the high bottom bracket (40mm BB drop on the frame), which made it difficult to get the saddle height where I wanted it. I like to be able to put a toe down when stopping without getting off the saddle, but the frame geometry + 650B conversion made that challenging to accomplish with full leg extension. However, I think that with the 26" wheels the bike was originally designed for, it should be okay. I could also try converting the Surly Ogre (a 700C version of the Troll) to 650B. Its 68mm BB drop should be just right for getting the saddle where I like it. 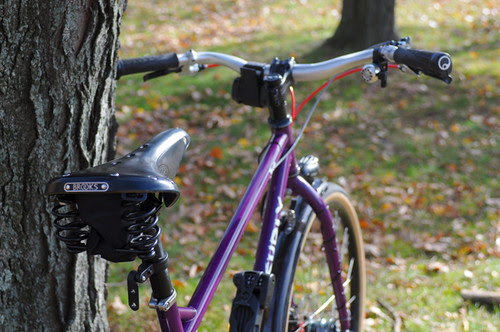 But of course I am just aimlessly fantasising here. I understand very little about mountain bikes and even less about their monster variations (still trying to figure out what exactly a suspension-corrected fork is). Still, I think that one excellent use for a machine like this could be as a winter bike. The Troll is not quite as extreme as a Pugsley, but neither is it as bulky. If fitted with 26" wheels and fat studded tires it could be just the thing for snowy Boston winters. With the frame priced at $500 MSRP, some strategic budget component choices could make for a fun and functional build. 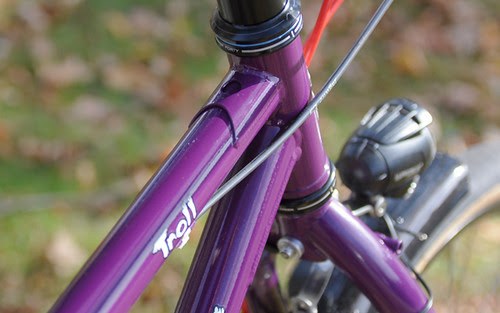 Susan purchased her Troll frame from Harris Cyclery, where she works as a custom fit specialist and lead salesperson. Naturally, she built it up herself, with parts she "had lying around." I hope she enjoys her cool new bike, and I thank her for letting me try it!
Labels: mountain bike Surly test rides trails