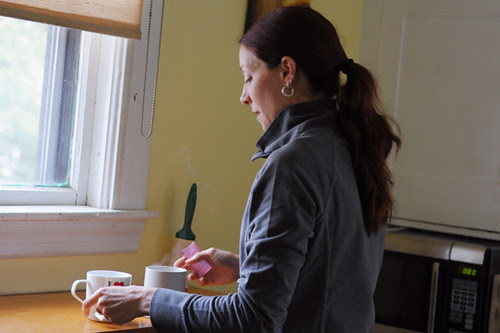 I saw her picture in a magazine and it was instant girl crush. I had never seen a creature so beautiful: She was like a graceful, violent, dirty Snow White. "That's Maureen Bruno-Roy," I was told, "she's a professional cyclocross racer." Half a year later, I was sitting in her kitchen. "Mo" was making tea while talking about her massage therapy business and riding Dutch bikes for transportation in Belgium. "Racing..." she shook her head with a smile when I brought it up, as if the concept both amused and confused her. "I am grateful that I happen to be good at it, but it's not everything." She showed me her pink Shogun mixte, which she rides to work in her regular clothes. She spoke about how much she loves bicycle infrastructure. Later we looked over her fleet of sponsored, impeccably tuned racing bikes in the basement. "You are welcome to borrow one," she said, as if talking about lending me a sweater... 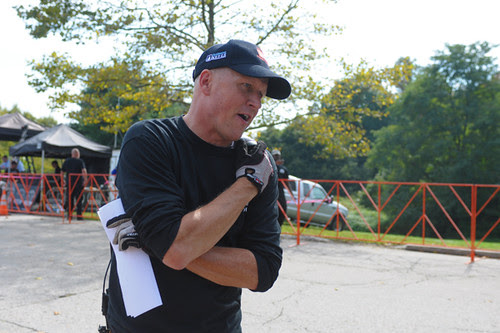 In between sips of coffee, I glanced up at the television screen with boredom, watching the race with unseeing eyes. A man in a zip-up sweater and a baseball cap glanced at me from the bar, then stood up and walked over to my table. He began to narrate the race in my ear as it unfolded, telling back stories about the riders and their behind-the-scenes dramas, then interrupting himself to describe what it was like to corner in the rain on a particular descent that was coming up, then interrupting himself again to speculate about the psychological state of the riders as they prepared to execute some maneuver I only vaguely understood. This was the 1989 World Cycling Championships race and he made it happen live, right in front of us. That was how I met the race announcer Richard Fries. Later I snapped some shots of him at the Providence Cyclocross Festival. I wonder whether he realised that in some way he was responsible for my being there... 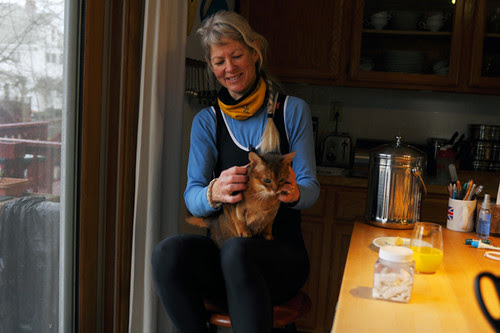 When I started riding with the legendary randonneuse Pamela Blalock, the thing that stunned me was that I never felt slow or inadequate. How could it be that I struggled to keep up with ordinary cyclists who were just slightly more experienced than me, and yet the Climbing Goddess and I seemed so effortlessly in sync? This was my first taste of a strange paradox: Riding with people who are way, way better than me is easier than riding with people who are just a little better... 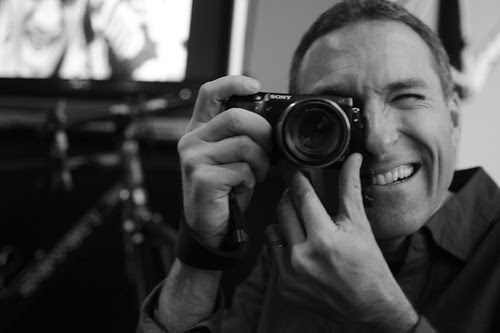 For a brief portion of a group ride, my path once crossed with the awe-inspiring endurance racer John Bayley. He rode next to me in the tail end of the double line we formed as if it were the most normal thing in the world for the likes of him to be riding with the likes of me. He truly made me feel that it was. We entered a stretch of dirt road that was rutted out and iced over in spots. As we chatted, I saw that, side by side and at considerable speed, we were approaching a narrow ridge between two deep ruts that only one of our wheels could possibly fit through. Before I knew what was happening, he wiggled ever so subtly and I instinctively followed suit, and without breaking stride, we both ended up riding along that narrow ridge without crossing wheels or slipping off of it. I doubt John even remembers this, considering he just kept cycling and chatting blithely while it was happening. But the incident was etched into my mind. "So this is how you do it..." 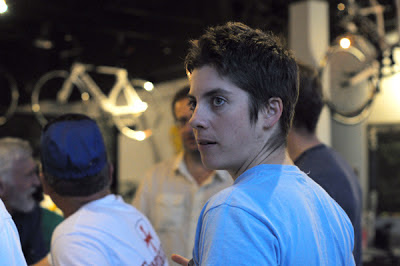 As a rider, Emily surprised me with her psychic abilities. When we cycle on narrow roads with traffic, we will ride single file and she will go in the front. And when she does this, Emily somehow knows exactly what speed to maintain so that I am right behind her at all times. I want to go faster and suddenly she is pedaling more vigorously. I slow down a tad and so does she, as if anticipating my fluctuating energy levels. "But Emily, how do you do that?" She says that she can see me in the corner of her eye, but I don't buy it. I try this when I ride with others, and find it impossible. I never, ever know how fast to go when I'm in the front. I'll think that I am going at a consistent pace, but then I'll look over my shoulder and see that I lost people; I feel like a jerk. Some day I want to be psychic, like Emily... 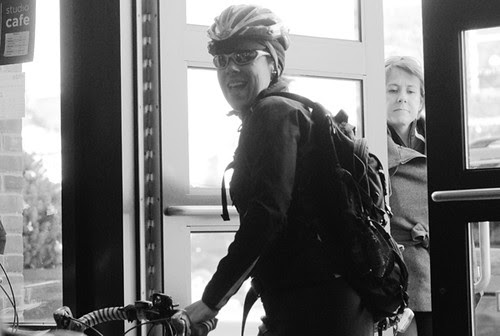 I could not get over the way Patria rode her racing bike. It was with the attitude of riding a beach cruiser. Easy-peasy, fun-fun-fun. We rode so close that our handlebars were almost touching and I hardly noticed. We talked, we laughed, we gossiped, and before I knew it we crested the hill that I thought I was too out of shape to tackle without disgracing myself. It was 35 degrees Fahrenheit. A group of men from another local club passed us going in the opposite direction. Feeling feisty, we waved at them exhuberantly and they yelled something in a cheerful tone before disappearing. When I mentioned my struggles with clipless pedals Patria reacted as if we were discussing fashion accessories. "Why don't you try the shoes I wear? You might like them better. And they come in this cute color..." A week later I was riding clipless. No practicing in the parking lot, no problems. Everything is easy with Patria... 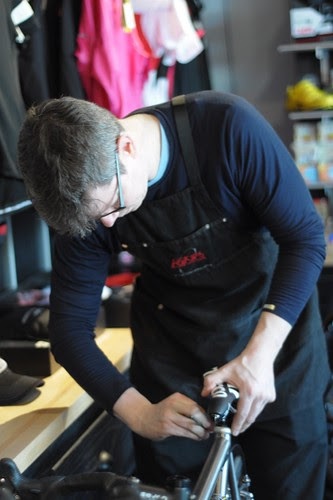 When I first visited the Ride Studio Cafe over two years ago, there was a tall, boyish man working there, making coffee and sweeping floors. He made my Americano, and told me his name was Rob. I assumed he was the barista, and he did nothing to contradict this impression. We'd chat when I visited the shop. I thought he was nice. Some months later I asked the guy at the cash register whom to see about test-riding a Seven. He pointed to the barista. "Talk to him, that's the owner." "The owner of what?" I asked. "The owner of Seven Cycles. And the Ride Studio Cafe."


It's been almost a year now since I formally joined my cycling club. It is not my intent to promote them here, but only to thank them. It is through this club that I've met all the people described here, who have opened up my mind, challenged my pre-conceived notions and expanded my point of view. Some people help you and you feel grateful, indebted. Others help you and you don't even know it. A person who can do that has achieved a state of grace.
Labels: bike friends Pamela roadcycling