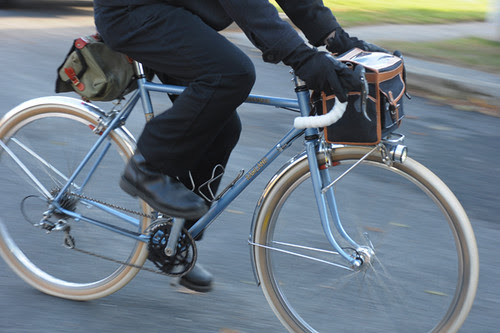 While I've wished for this to happen, I doubted that it actually would: Low trail, 650B bicycles entering into standard production. But the day has arrived, and it arrived with an email from Soma Fabrications.

An e-buddy of mine over there informs me that they will soon release a "Grand Randonneur" model, co-designed with Boulder Bicycles/Rene Herse. "Is this public knowledge?" I asked, wiping the spray of coffee off my keyboard. Not really, was the reply, but I was welcome to make it such. "Just note that it’s still unofficial, and some of the details may change before production." Noted. Oh, and do I want to test-ride the prototype once it's ready? As if they had to ask.

The Soma announcement came on the heels of Rawland's release of the Stag: a model similar to the Nordavinden, only with slightly different specs. The pre-order pricetag is $625 including a free set of Pacenti PL23 rims. I imagine Soma will try to get its pricepoint in the same range. Adding the $500 Velo Orange Polyvalent to the mix, that gives us 3 manufacturers offering standard production low trail 650B framesets, made in Taiwan, for well under $1,000.

For those who prefer a US-made bike, there are several pre-fab models available in the $1,500 range, including the Box Dog Pelican, the Boulder Randonneur, and most recently the Rambler from Ocean Air Cycles. If you've ever wanted to try a bike like this without the wait, uncertainty and pricetag of going full custom, there are options.

But speaking of custom, more and more framebuilders are testing the waters with low trail 650B designs and some of the names may surprise you. As I write this, I am eying a fresh-off-the-boat prototype frameset from Mercian Cycles in England that was built to my spec. (For the record, they are skeptical of the low trail design, so if the bike doesn't ride well I take full responsibility.) Equally surprising is that Seven Cycles are willing to give it a go, in titanium of course. Jokingly I asked them about it a little while ago, and the reply was "Let's talk."

So what's so special about low trail? In a sense, nothing, and that's sort of the point. Some of us simply believe it to be a "normal" geometry just like any other that happens to be useful in some contexts and beneficial for some riders. This does not mean that it's special or better, but only that we feel it ought to exist as a viable option. Personally, I've come to appreciate the feel of low trail on city bikes, as well as on fat tire bikes ridden on dirt; the combination of how responsive and at the same time intuitive these bikes feel intrigues me. But of course not everyone agrees. The husband tolerates low trail on his Brompton, because he finds the bike handy, but dislikes it on roadbikes. And framebuilder Mike Flanigan - tempted to try the Rawland after I raved about its handling - just smiled and shook his head after his ride: "Nope, still don't like low trail" - though he's made a few for customers, and continues to do so.

Is low trail design a fad that will seem silly in hindsight, or an enduring trend that is here to stay? We'll just have to wait and see.
Labels: ANT framebuilding Rawland Soma