From Strange to Familiar 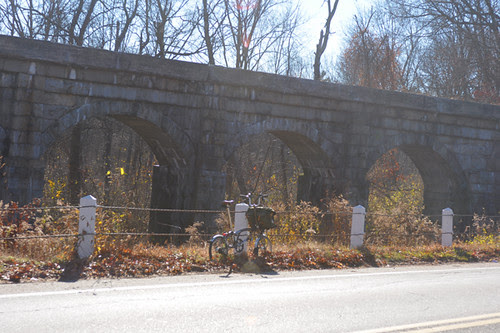 For the first time in a long time, I've been riding for transportation along routes that started out as uncharted territories. As it often goes, at first these routes seemed hostile, strange. Unfamiliar towns. Different patterns of motorist behaviour than what I'd gotten used to. But over time, the trips grew familiar, peaceful, and therefore unremarkable. This reminded me why I write so much less frequently now about transportation cycling than I used to: because nothing "happens." Whether my commute is 2 miles or 22 miles, nothing about the process is really novel anymore. With roadcycling, there is still the rush of going a longer distance, discovering a new route, learning a new skill, riding with a new group or partner. But with commuting, things have become automated.

Most of all, I tend to forget the spectacle I make of myself when I - a woman in a long belted overcoat, knee high boots and a beret - ride a weird bike through areas where such sights aren't as normal as they are in Boston Metro. Drivers roll down their windows in freezing temperatures just to get a better look at me. No one has honked or gotten angry with me yet for being on the road; I think they are too stunned to.

The other day I was just riding along, heading homeward, when I sensed a car hovering behind me. I looked over my shoulder and saw it was a white minivan. The sun was in my eyes and I could not make out the driver. I got a little nervous and moved over to the right encouraging them to pass me, but they kept hovering. Finally, the van did pass, only to pull over to the side of the road in front of me. A woman jumped out and started waving her arms wildly, beckoning me to stop. Out of the windows I could now see several children's heads peeking out. So I braked and put a foot down tentatively, hoping this was not some trap to kidnap me and harvest my organs. And the woman shouted "Oh my God, I just wanted to tell you I love your bike and your outfit!" She asked some questions about the bike and where I was going, and was stunned by my answers. What about a bike that could fit her kids? (Just two kids, the others in the van were the neighbours'.) Yes, there are those kinds of bikes as well, I told her, and described the different options. She was so excited, it was really quite marvelous. A little extreme to pull the minivan over to talk to me, sure, but I'll take it over driver hostility any day. What started out as being strange to her became familiar. These are good encounters.
Labels: social commentary transport transportation options