Who Makes Your Bottle Cage? 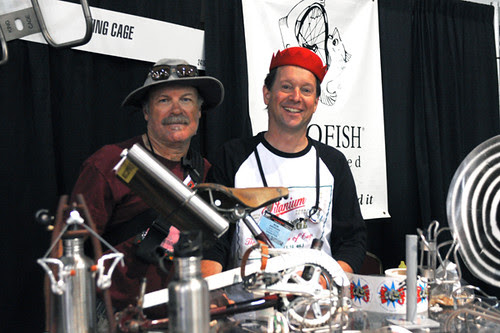 So... do you know who makes your bottle cages? It might seem like a silly question. I mean, of all things, one is not about to seek out some super special artisanal cages, right? Well, recently I learned that mine were just that: made by Ron Andrews and crew, by hand, in Colorado. I feel a little embarrassed that I did not know this about King Cage bottle cages, but the truth is I didn't. I bought mine because they were available at local bike shops, reasonably priced and reputed to be good. I like them, but I assumed that like most things they were mass produced in Taiwan. Until there I was, walking around Interbike. And there he was, a guy wearing a crown and twirling around all manner of cage-like contraptions. Several minutes into our conversation, it finally dawned on me that this person actually makes my bottle cages. I also learned of his connection to the Fat City Cycles clan and our local New England framebuilders. He asked me how this guy and that guy were doing. I get ridiculously excited by encounters like this. 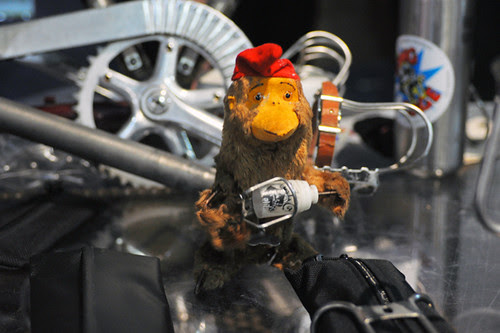 Of course it's generally impossible to be at the King Cage booth and not get excited. It is like a miniature circus. A wind-up monkey dances across the table, inserting a tiny water bottle into a miniature cage instead of banging cymbals. 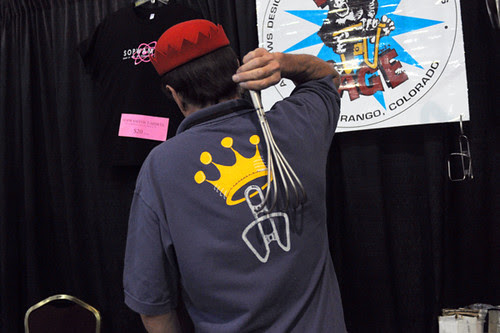 Items such as stop motion animation booklets and huge titanium back scratchers are demonstrated with enthusiasm. 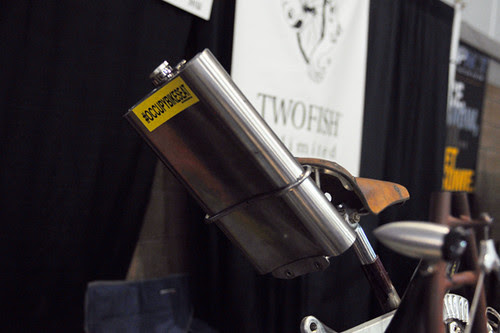 An under-the-saddle titanium cage, with titanium flask sporting an #OCCUPYBIKESEAT decal. There was much more, and the booth was a bit like a parallel universe. Soon I craved every crazy accessory made by King Cage. But I limited myself to snagging a set of titanium cages at special Interbike prices, before they were all gone. My roadbike was very pleased to receive these! 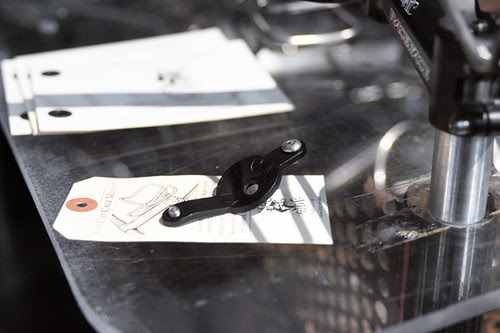 Ron Andrews started out making cages in titanium, and still offers these in addition to the more popular and affordable stainless cages. He also offers titanium tire levers, stainless toe cages, and top cap mounts (pictured above) that make it possible to attach a bottle cage to a bicycle's stem. All of these items can be bought from the King Cage website directly, as well as at many bike shops. 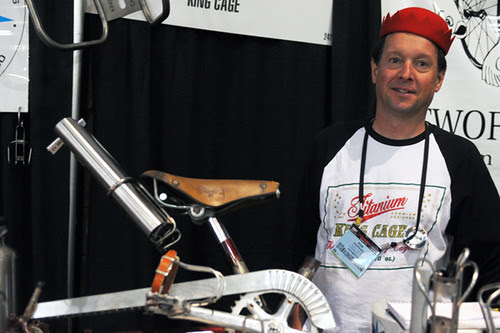 Other than a Nitto cage I once received as a gift, all of my other bottle cages have been by King Cage. They are advertised as lightweight, non-marking and super strong, and after 3 years of use I have not experienced anything to contradict that. I use them with both plastic and (twine-wrapped) stainless steel bottles, and it's always a good fit. I can't fully explain why it made me so giddily happy to learn that these simple cages - widely available and relatively inexpensive - are made by hand by a friend of friends. Maybe it's precisely because they are such small accessories, and many of us don't give them much thought. It is heartening to know that somebody does, that somebody has made them their life's work with such dedication and panache.
Labels: handmade Interbike product reviews