Bruce Gordon Was Nice to Me 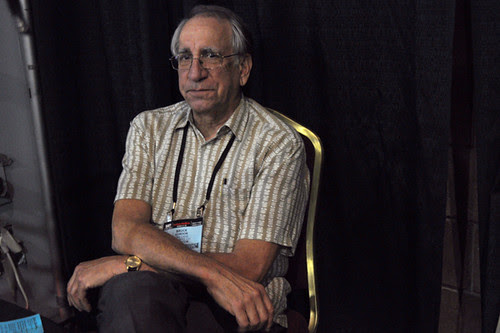 I spotted him in the shadows, at the back of the exhibition hall. It was unexpected. This was Interbike after all, not NAHBS. But there he was, behind a big beautiful red bike with Bruce Gordon decals, underneath a banner with the mysterious word SOPWAMTOS (which, I soon learn, is the Society of People Who Actually Make Their Own Sh!t). A broad-shoulderd, slightly slouchy, gray-haired man with the face of a Soviet literary dissident circa the 1960s. I would give anything to have the writing skills to describe Bruce Gordon's facial features and expression. But alas, I must struggle. Coyly suspicious? Exuberantly grumpy? Playfully defiant? Something like that. 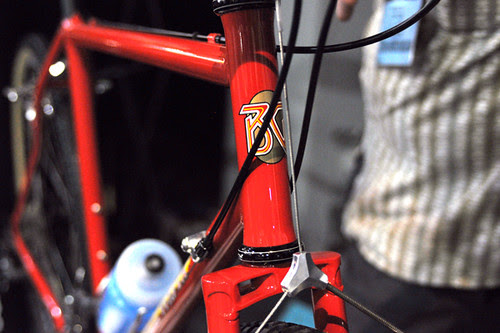 If you don't already know, Bruce Gordon is a framebuilder out in Petaluma, California. One of the best, they say. One of those guys who has been at it for decades, one of the legends. At a loss for words from the bizarre charm of his physical presence, I blurt out something generic about being pleased to meet him. In reply he laughs with a bitterness that is masterful in its combination of sincerity and theatrics. "If I could go back and do something else with my life, trust me I would!" he snorts. "So... want a bike?" Out of curiosity I ask about the wait list. "I am all caught up," he says, "no wait list. You can go ahead and write that on your blog" (the last word is accompanied by a playfully-scornful - or maybe not so playfully, this is ambiguous by design - roll of the eyes. But who cares. Bruce Gordon has no wait list? Okay, I will write that.) 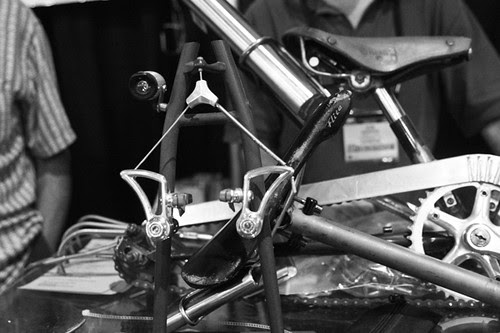 Next we discuss his famous Dangerous Pointy Brakes, which I'd recently tried on one of Pamela Blalock's bikes and discovered to be surprisingly functional (unlike most other cantis I've tried). He was pleased to hear this. For a small fortune the brakes could be mine. Alas I had neither the required sum, nor a bike on which these superior brakes could go. But yes, I would mention them on my "blog."

What can I say. I could have moved along at that point. But I don't know when to quit. And no, that's not even it. In truth, I was a little smitten. I wanted this man to keep talking. I wanted to study his face and figure out what or whom it reminded me of. 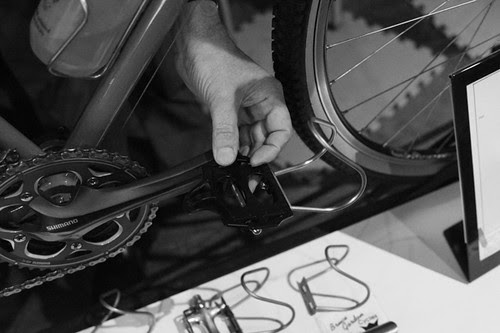 So I stuck around, touched the bike, asked questions. He quickly grew suspicious of how much I seemed to know about frame geometry and such. "Oh don't tell me. You're planning to become a framebuilder!" I assured him that I was not, but confessed that I might be building a frame for myself shortly. Nothing serious. Just to give it a try. But becoming a framebuilder, no. I understand the amount of training that requires; I know that earning a living that way is next to impossible. "You're damn right it's impossible." And thus began a speech about the horrors and deceptions of the pipe dream of becoming a framebuilder that claims hopeful innocents of my generation by the dozen. Bruce Gordon's opinion on the matter is basically a more extreme version of this. "If I could save just one young person from becoming a framebuilder, I would die happy," he tells me. I believe him, and promise to never become a framebuilder. 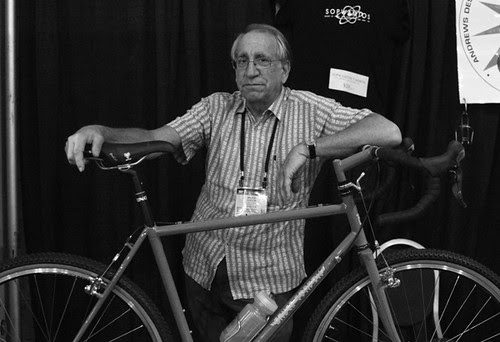 He eyes me with sadness and shakes his head. He asks what I used to do for a living before the tragedy of succumbing to bikes. I tell him briefly, and soon we are talking about bikes as one would talk about a disease. He tells me some personal stuff, I reciprocate. We commiserate. Before I know it, the conversation begins to resemble the sort of jaded, weepy, vodka-fueled exchange that takes place at around 3 in the morning. Except this is Interbike, high noon, and I am sober. 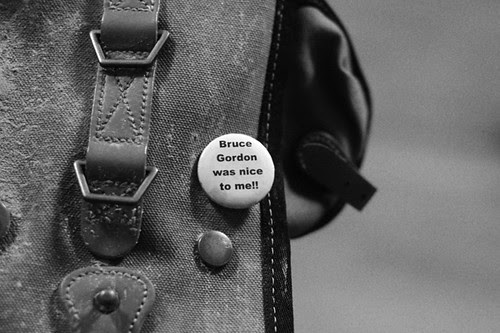 The following day, I walked by the booth again and gave Bruce Gordon an uncertain wave. I genuinely did not think he'd remember me; it was as if our conversation the day before had been something I'd imagined. But he did remember. And then he gave me this pin. It's a limited edition. The regular one reads "Bruce Gordon was rude to me."

And that is my story of meeting Bruce Gordon. You should buy one of his bikes. I hear they are good and he's all caught up on his wait list.
Labels: bike shows framebuilders framebuilding handmade Interbike