A Walk in the Woods, a Day at the Races 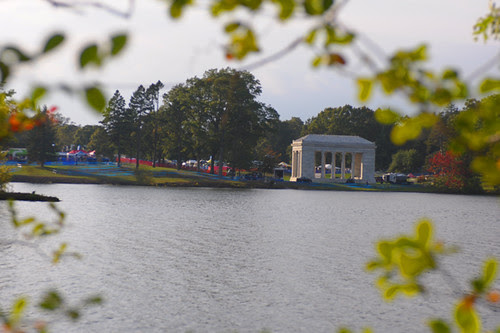 It felt like one of those dream states where worlds collide and everything is mixed together. 80 degree heat in October. A supposedly obscure bicycle race with ball game-sized crowds. Roads closed, cheering heard from a mile away. But most disorienting was the warped sense of time and place. It was Saturday morning, and I was walking through the woods where I'd spent practically all my free time as a teenager many years ago. I had not set foot there in over a decade, but my rote memory remained intact. My feet did the walking along the still-familiar trails until finally I found myself in a clearing, facing that wacky neoclassical structure that now served as the podium for the Providence Cyclocross Festival. No matter how much I tried to incorporate this fact into my narrative of "the woods" of my teenage years, it just did not compute. Worlds, past and present, were colliding. 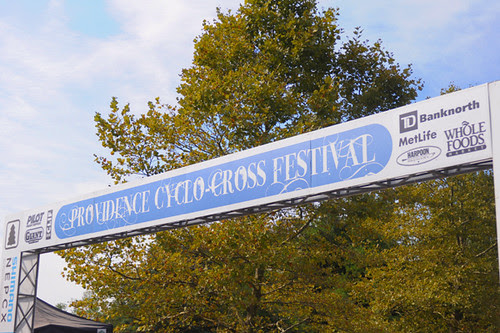 They say that when you visit places from your younger years everything is smaller than you remembered, but the opposite was the case here. The clearing was more spacious than I recalled. The trees looked taller. The race course was enormous and complicated. They told me Cross Vegas was a bigger deal than any other race I was likely to see, but as a spectator I disagree. This was huge. There was more going on. And in the daylight I could see it all a lot better. 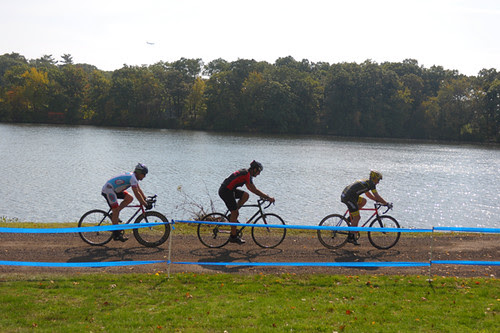 Part of the course followed the lake, with the riders backlit picturesquely as they cycled along the shimmering water. 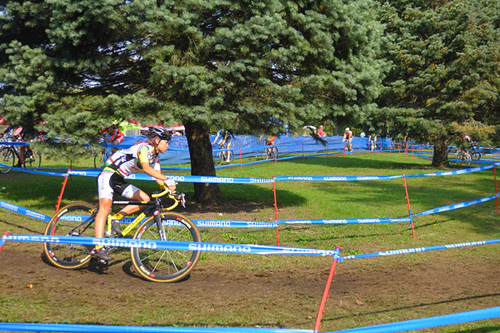 Another part wound its way through a pine grove, beautiful trees and tight turns everywhere. 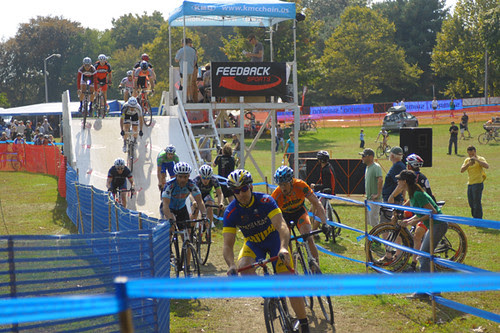 The stretch of paved road leading up to the start/finish. 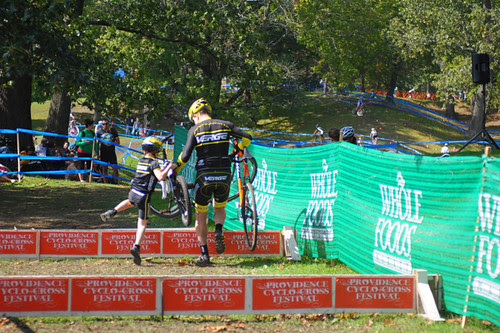 And of course the exciting parts with the obstacles and the steep hills. 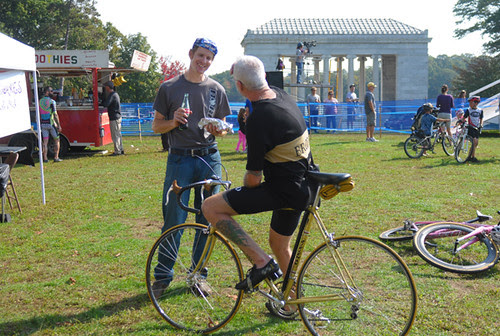 But aside from the race course itself, there were many pockets of public space where spectators and racers could stroll around, socialise, eat, watch. 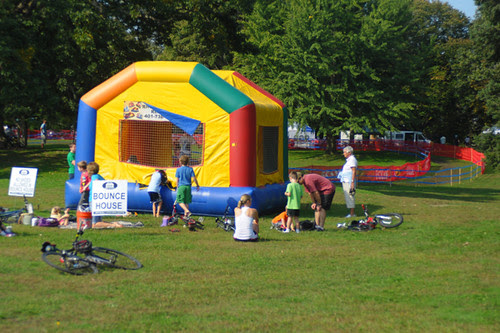 A bouncy-house was set up for kids. 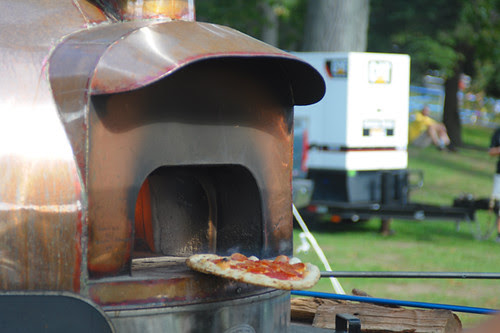 There were multiple food vendors. 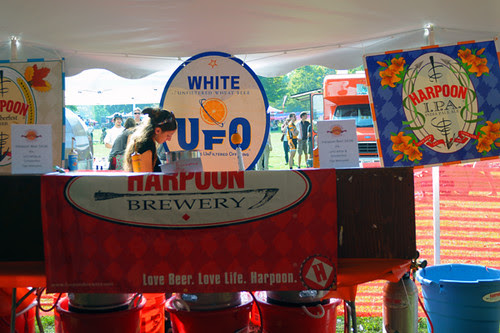 And the beer tent offered some of the best seats in the house (though they wouldn't serve me as I didn't have my driver's license!). 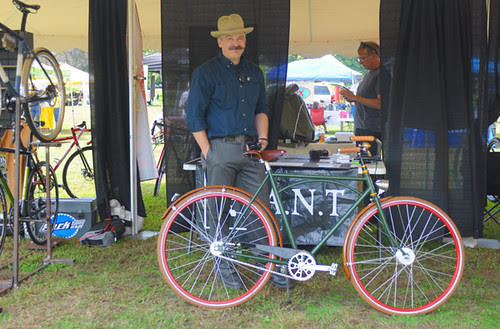 Finally, there were tents with handmade bicycles from local builders on display, as well as a tent selling interesting vintage bikes. It was easy to see why the Festival was attractive for so many: It simply offered a nice way to spend a day in the park, around nature and bikes. There was no charge for admission, and food and drink were reasonably priced. The turnout was impressive, and with the sun out people stuck around all day - some watching the races, others simply walking around, talking, picnicking. I never expected to see a bicycling event in the US with such a large public turnout, let alone in my former neck of the woods. 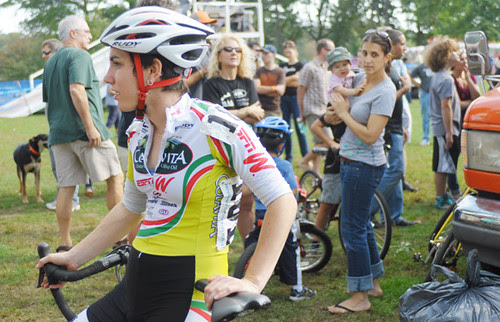 In her book Mud, Snow, and Cyclocross (available at the Ride Studio Cafe to purchase or read inhouse), Molly Hurford contrasts cyclocross spectator culture in Europe with that in the US. The main difference is that at American races, until very recently spectators were largely made up of participants. Amateurs would race, then stick around for the elite races that would take place later. Elite racers would show up early and watch the amateurs. And while friends and families would come and watch as well, the events have nonetheless been mostly insular, with no expectation of engaging the general public. In Europe, on the other hand, cyclocross has for some time been a spectator sport on a grand scale, much like baseball or football in the US. At that level, it would be ridiculous to suggest that one has to be a participant or know one personally in order to enjoy watching the event. It is entertainment. Hurford points out that at the moment, cyclocross in the US seems to be on the cusp of potentially transitioning to the type of status it holds in Europe. The audience I saw in Providence on Saturday certainly supported this possibility. 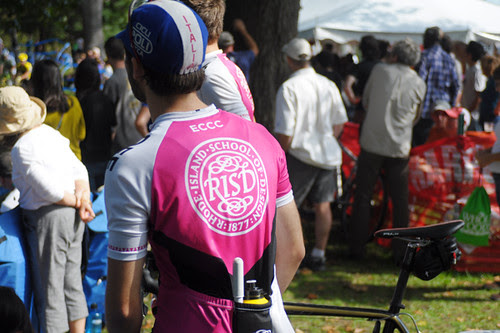 Listening to some of the conversations around me, it was clear that a substantial chunk of the public had no direct connection to cyclocross. They stopped by because they read about the event in the local paper's weekend listings. Or else their neighbour or co-worker was going and they tagged along. Probably because I had a big camera, I was approached on multiple occasions and asked questions about the event by spectators who were there for the first time and weren't sure what they were looking at. But despite not understanding what was going on around them, these visitors were obviously having a good time. They were sticking around. They were supporting the vendors. They were looking at all the bike and equipment manufacturers' names with interest. And they were saying "good job" to the racers. I wonder how many of them had a good enough time that they will seek out other races after this one. I can see it happening. 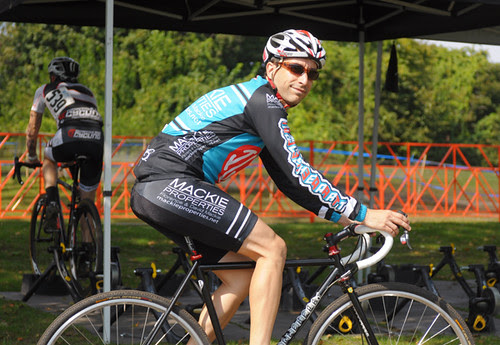 With attendance high and not limited to cyclocross inner circles, sponsors enjoy greater visibility. And if you look at the sponsors whose names are displayed on the team kits, many of them are outside the bicycle industry: real estate agencies, lawyers, dentists, grocery stores, landscaping firms. Greater attendance by the general public directly benefits these businesses, which makes it worth their while to continue - and hopefully expand - their sponsorship programs. It will also make other businesses consider cycling sponsorship as a viable form of local advertising. 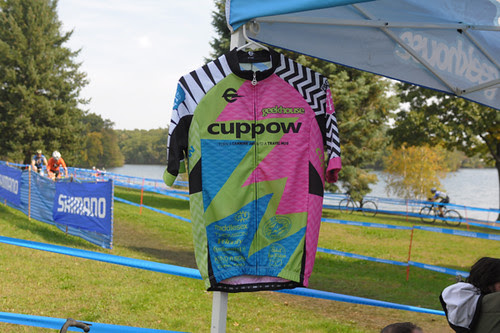 I think about things like this, because quite a few of my friends and acquaintances race, and there is a lot of discontent about how difficult it is to attract sponsors. But the reality is that sponsorship is a form of advertising, not a charity or a merit scholarship. A business needs to believe that a cyclist will provide sufficient visibility for their brand to make it worth their while to sponsor them. And for that we need wider audiences and greater media attention - even if it's just grassroots media - people taking pictures of the riders in their kits, then posting them online and sharing via social media. 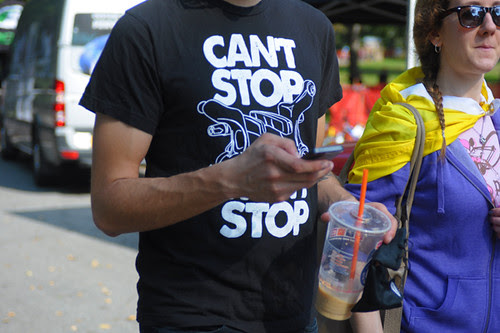 Getting back to the idea of US cyclocross being in a place where it can potentially break out into the mainstream, one thing I noted in Molly Hurford's book is that by far not all of her interviewees wanted that. Some expressed disdain toward the fact that in Europe there are "fat guys smoking cigars" showing up to the races, as well as others who are not into the sport at a participant level. These critics would prefer that cyclocross in the US remain insular, "pure." It would be a valid point of view ...if those very same people then did not turn around and complain about lack of sponsorship opportunities. You can't have it both ways. 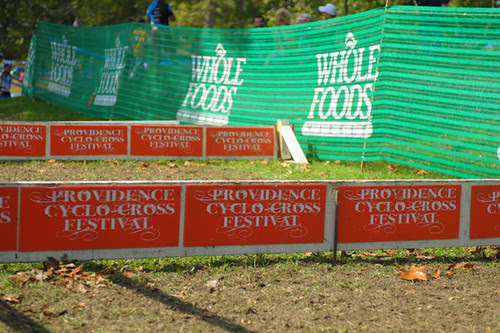 Why do I care about any of this, you might be asking yourself? Well, because as a spectator I am finding cyclocross immensely entertaining, and I appreciate that. Entertainment is a big deal. We need to sustain those who entertain us if we want the fun to continue. 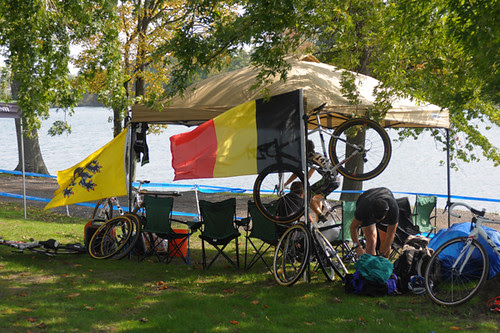 Watching a cyclocross race in a place that I had filed away as belonging to a past life - separated from all this crazy bicycle stuff by at least a couple of other past lives - has challenged my tendency to compartmentalise things, to break up the past into distinct, locked memory boxes. Things do come around full circle sometimes. It's like following a trail in the woods, and eventually finding that you've walked around a lake. And now here you are, in the same spot where you first stood twenty years ago, straddling your rusty mountain bike in front of the Temple to Music. "You can totally race cross on a mountain bike," says a teenage girl to her friend behind me, as I stand there lost in thought.
Labels: bicycle events bicycle industry cyclocross mountain bike races trails