A Season of Evenings 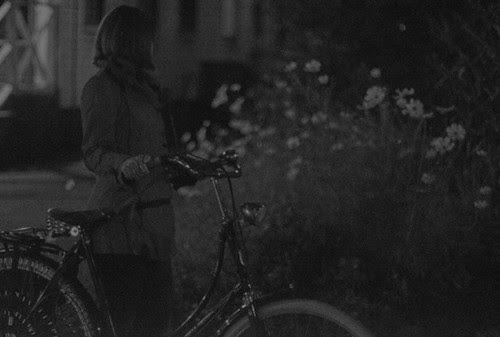 Walking through town just as the light began to fade, I had one of those odd moments when everything falls into a rhythm. A woman in very high heels had just unlocked her bicycle from a pole and began rolling it down the sidewalk toward me, her shoes clicking on the bricks and the hem of her coat fluttering in the breeze. At the same time a second-story window opened and there was the late Jim Morrison's drunken baritone singing "come on now touch me baby." The sound warped a little, carried sideways by the breeze. Just then someone down the street slammed their car door and the alarm went off, a persistent beeping without that edge of harshness it would have had, had it been closer. As I stood still for some seconds, letting the woman in the heels and coat maneuver her bike around me, all of these events became harmonised. Click-click, beep-beep, what was that promise that you made? Click-click, beep-beep, why won't you tell me what she said? The woman looked up toward the open window as she passed me, and suddenly I was flooded with a sense of deja-vu.

In the Russian language there is a word - a verb - to describe the onset of evening: "vechereyet" (вечереет). It's an archaic word, but still used on occasion. The closest English translation would be something like "evening is coming," but the mood is not the same. And it's the mood of that word that's important. You hear it, and you feel an "eveningness" gently setting in. It's an anticipatory state, fostering expectations of moonlight, cricket sounds, a chill in the air, perhaps peals of laugher in the dark. I remembered this word on my way home today. The sun had nearly set and when I looked at the time I saw it was 5:35pm. "This is the last week of October," I thought. A season of early evenings awaits.
Labels: night time cycling stories