Trends I'd Like to See in the Bike Industry 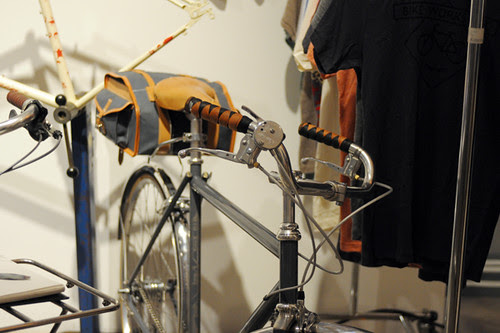 With Interbike coming up this week, discussions regarding what trends to expect have been coming up. Last year was big for transportation cycling, but where will it go from there? To be honest, I have no idea. At the small but influential New Amsterdam show earlier this year the biggest specific trend I could spot was an increase in casual reflective gear. Hopefully Interbike will surprise us with something more substantial.

Meanwhile, instead of making predictions I thought I'd list some of the things I'd like to see myself. In no particular order...


Transportation bicycles for long distance
Most transportation-specific bicycles on the market today are designed for fairly short trips over easy terrain. But for a huge segment of the population, longer commutes over hilly terrain are more typical. Granted, cycling is not feasible for everyone. But I believe that for many, undertaking a long commute by bike is possible without sacrificing personal style and enjoyment. With that in mind, I would like to see more performance-oriented yet transportation-specific bicycle designs. While road, cyclocross and touring bikes can be adapted for long-distance commuting, it is exactly that: aftermarket adaptation. For every person who goes through the trouble, there are probably 100 who will not bother. A transportation-specific design will both validate the possibility of long distance transportation cycling, and make it easy to actually do it.

Affordable, quality dynamo lighting packages
The options for bright LED dynamo lights and light-weight, no-drag dynamo hubs have never been better. However, that's the good stuff and it is very expensive. And the inexpensive stuff - particularly what tends to be bundled with typical city bikes - is not great. Consumers complain about the dim halogen headlights, the heavy, lackluster hubs. It would be good to have an affordable middle ground. Bike shops that specialise in fully equipped bicycles tend to agree, and some have taken to modifying stock bikes with upgrades. But to see an across-the-board improvement in quality of bundled lighting packages, the initiative must come from the manufacturers.

Decent cycling trousers
Normally I wear my everyday clothing when riding for transportation and do not feel a need for cycling-specific designs. One exception is trousers. As it stands, I ride mostly in skirts and avoid trousers, because the crotch seams on most of them - particularly jeans - cause me discomfort in the saddle on anything but the shortest rides. Considering the growing selection of cycling-specific trousers on the market, it amazes me that virtually none of them aim to address this issue (which I know others experience!), focusing instead on bells and whistles such as U-lock pockets and reflective tabs. Somehow the idea of a seam-free gusseted crotch either escapes the designers or does not seem important, but I hope to see this feature in future.

Easy to use mini-pumps
When I talk to women about self-sufficiency on the road, a lot of it comes down to finding the equipment physically difficult to use. This is particularly true of portable bicycle pumps. A few months back I attended a "fix your flat in 5 minutes flat" clinic, and most of the women present admitted they were unable to use the mini-pump they carried with them on the bike - telling stories of roadside frustration, ripped out valves and ruined tubes. In fact there is exactly one mini pump I know of that is agreed to be fairly easy to use, but the complaint is that it's heavy; few are willing to carry it on their pared-down roadbike. It would be great to see manufacturers come up with designs that are both easy to work and lightweight; it would be a game-changer for many.

Road component groups designed for low gearing
For those who prefer low gears on their roadbikes for climbing-intensive riding, it is not easy to achieve a build that is in equal measure modern, lightweight, and perfectly functional. Road component groups tend to be optimised for racing and therefore geared on the high side. Setting up a bike with truly low gears (I am talking sub-1:1 here) usually means resorting to mixing and matching components and brands, switching out chainrings to non-native ones, installing mountain bike derailleurs, sourcing vintage parts, and so on. While I am sure some will disagree, according to my observations and personal experience it is rare that these hybrid drivetrains will function as flawlessly as dedicated component groups where everything is designed to work together. This year SRAM has begun to venture into the low gearing territory with their "WiFli technology" - lightweight road derailleurs designed to accommodate wider cassettes. I can't wait for others to follow suit.


Mainstreaming of 650B
There has been talk about the rising popularity of 650B for years, and I am looking forward to this wheel size finally becoming mainstream and unremarkable for both road-to-trail and transportation bicycles. Increasingly, cyclists are choosing bikes built for 650B wheels: Framebuilders are being asked to make more of them, DIY 650B conversions are all the rage, choices for 650B rims and tires are expanding, and some fringe manufacturers are offering dedicated 650B models. There are benefits to 650B wheels, including wider tires and no toe overlap. But there is also concern about the longevity of the trend, as well as about mainstream bike shops not stocking relevant parts - which could pose problems for those experiencing mechanical issues on long trips. I hope it is only a matter of time before affordable and mainstream manufacturers normalise 650B and put those concerns to rest.

So that's my wish-list. I don't think anything here is especially radical or too much to hope for. Mostly I am guessing it is a matter of time, but hopefully sooner rather than later. What trends would you like to see in the bicycle industry in the years to come?
Labels: bicycle industry bike shows Interbike