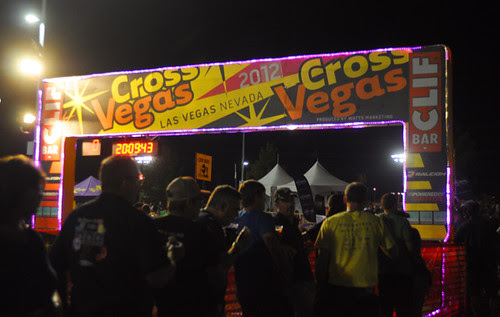 "So I hear you are into cyclocross," said Martina from Clever Cycles as we chatted on the second day of Interbike. I responded with genuine amazement. "Me, into cyclocross? What makes you say that?" And then I remembered that I'd spent the previous evening live-posting a continuous stream of blurry snapshots from Cross Vegas - "the biggest cyclocross race in America." I gave up two other industry events to attend this thing. I guess it did seem like I was pretty into it! But as I was quick to explain, I am only interested in watching, not racing. In fact, of all the forms of cycling out there, cyclocross is the one I am least likely to actually take part in (it combines every aspect of cycling I am terrible at!). Moreover, I had never before been able to tolerate - let alone enjoy - watching sports of any kind. So what makes cyclocross so appealing? 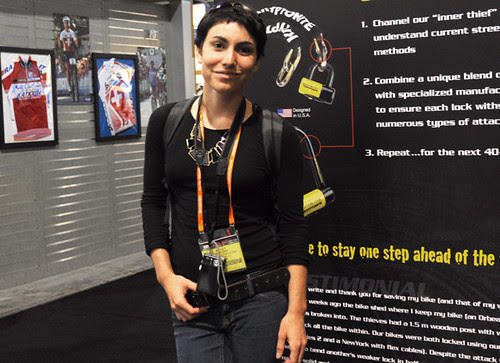 As it happens, Molly Hurford has just written a book that seeks to answer that very question. It's called Mud, Snow, and Cyclocross: How Cross Took Over US Cycling. Having borrowed a copy from the Ride Studio Cafe library, I finished it just days before Interbike. Aside from providing historical context, Hurford's book helped me make sense of my own feelings toward this bizarre sport. As race promoters all over the country have discovered, cyclocross is in many ways the perfect spectator event. And so I thought it might be interesting to describe it from the point of view of someone who is purely a spectator - and a fairly clueless one at that. 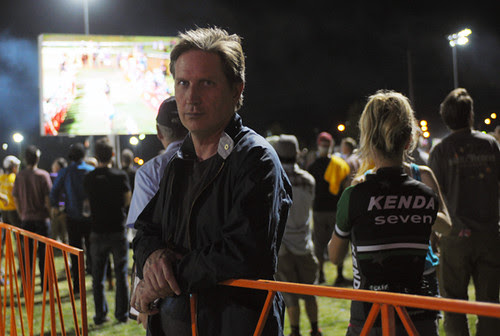 To do this, I will backtrack to last year's Interbike, where it all started. I had zero interest in attending Cross Vegas, but tagged along with Chris Kostman, who insisted I should at least stop by ("Come on, you can't go to Interbike and not see this!"). We drove to a giant field on the outskirts of town filled with tipsy people and flooded with electric light. In the distance I could see a colourful blur of bicyclists making their way through an elaborate obstacle course. As the sounds of cowbells and screams filled my ears, I remember wondering: "What am I doing here?" Five minutes later I was leaning over a barrier, ringing a cowbell and having a shockingly great time. And that's pretty much your typical "my first time watching 'cross" story. No one intends to like it, but inevitably they do. 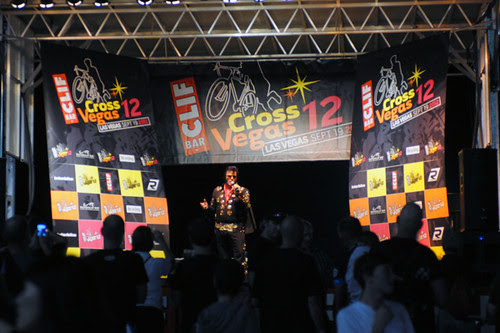 This year we arrived to the spectacle of Elvis performing on stage before the start of the elite races. 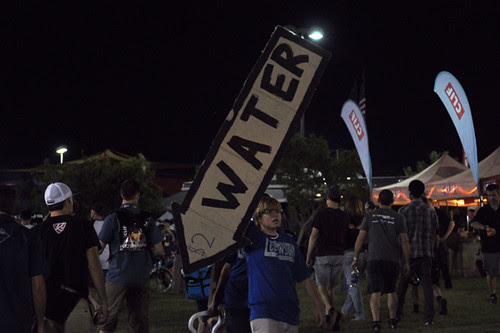 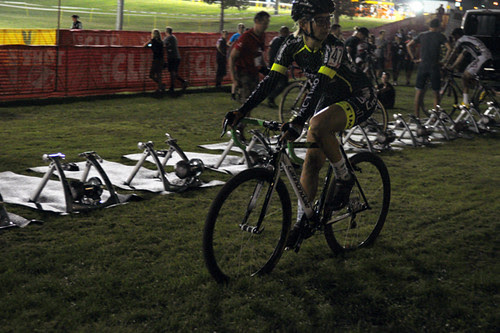 Cyclists rode around the grass warming up. Bicycles were being adjusted. 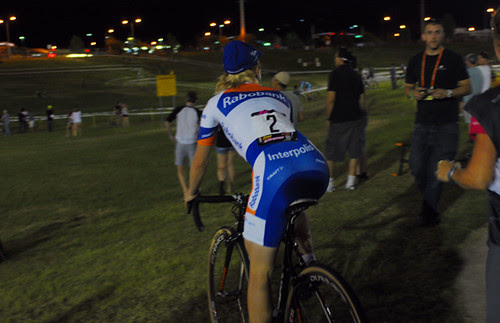 Before the crowds became too dense, I got the chance to survey the empty course. Winding around the grassy field, it did not look too technical, though there were lots of tight turns and a couple of short steep hills. 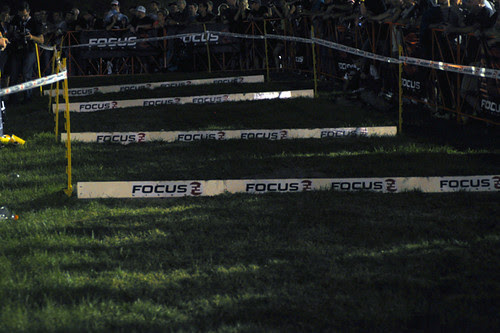 And, of course, these. I still remember how stunned I was when I first saw the riders hop right over them without breaking stride. How is this possible? 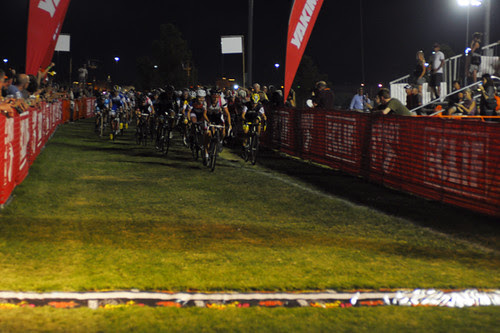 And then the race began. First the women's elite race; the mens would be next. Watching the hoard of riders charge cross the start line, the excitement of it all came back to me. I got goosebumps. 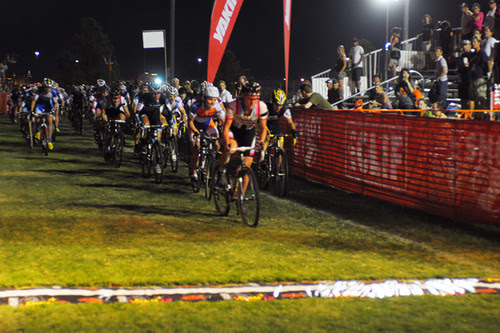 The thing is that at a cyclocross race, you can stand so close that you feel the energy of the riders wash over you like a wave. 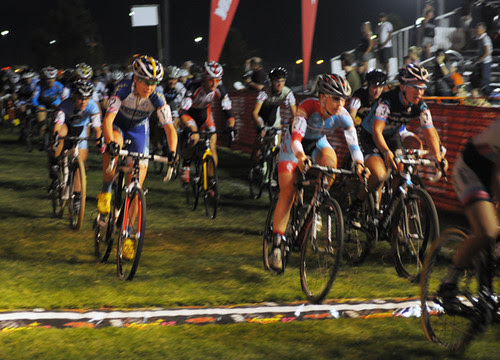 And this wave is not some abstract poetic concept. It is very real, visceral. Even if you know nothing about race tactics and don't follow the background stories of any of the riders - just standing there and feeling so much human power and speed happening inches from your own body is a physical rush. 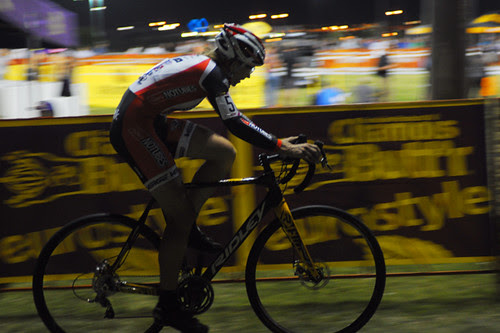 Watching track racing is more abstract in comparison, because the riders are further away. And with road racing you can only witness a small portion of the course at a time. But with cyclocross, all is laid out right in front of you in close proximity. The course winds around the spectators; it intertwines with them. There is a feeling that everything is happening everywhere, all at once. 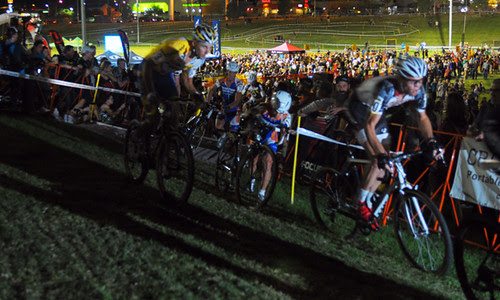 Pressed against the barrier, I can see the riders' flushed faces, gritted teeth, twitching fingers, razor-burned legs. The physicality and rawness of it are overwhelming. 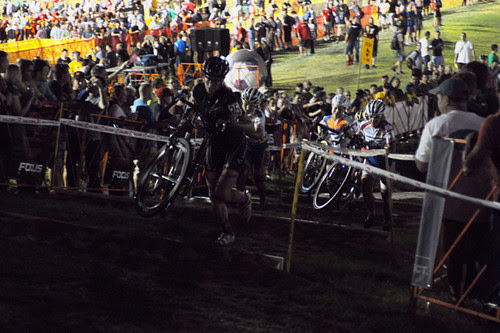 And then there are the technical parts that differentiate cyclocross from other forms of cycling. The obstacles, the vertical uphills, the dismounts and remounts, the bouts of running with the bike. No matter how graceful the rider, there is an intimate awkwardness to these struggles that makes us feel as if we are witnessing something private that perhaps we are not supposed to be witnessing. 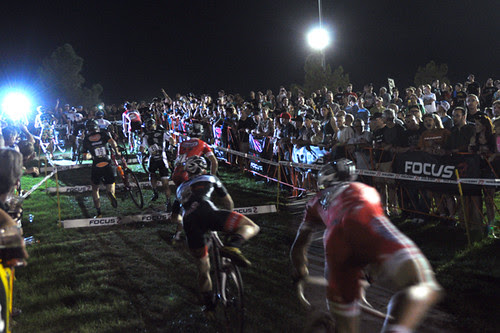 Equally intriguing, is when a group of riders is so synchronised in their movements, that the dismounts and remounts appear to be done in choreographed unison - like a staged ballet. 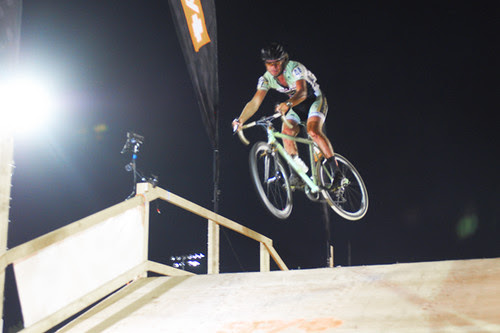 And of course there are things like this - at which point it is the crowd's chorus of gasps that seems choreographed. 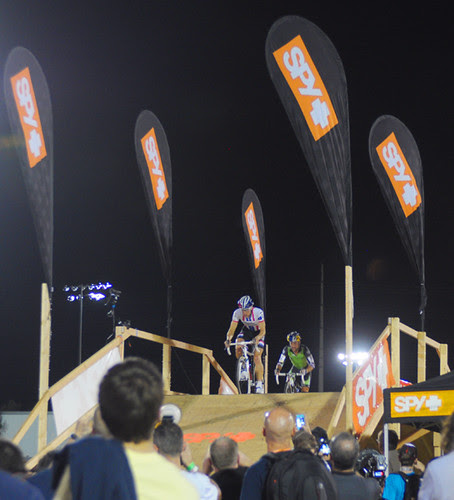 Watching first the women's, then the men's race, I noticed differences. The men stuck in larger, tighter clusters while the women were more strung out after the first lap. There were also difference in demeanor and body language - too subtle to describe, but nonetheless there. Watching the two races were separate experiences. 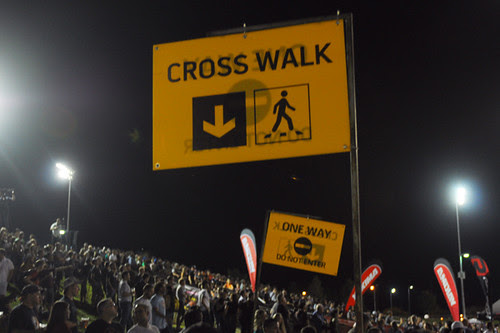 As the lead group of riders made its way through the course, spectators would rush to position themselves in different spots. This too was interesting to watch. 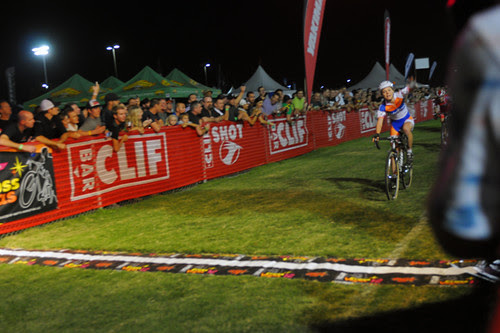 Through the elbows of others, I could see the anticipatory face of each rider as they crossed the finish line. 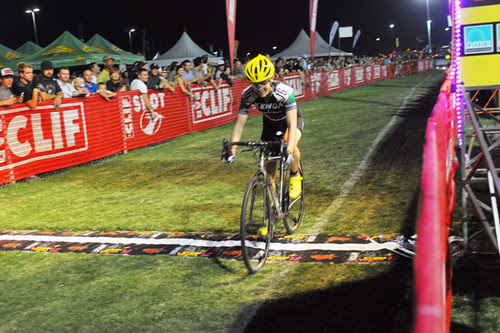 What struck me was how much they seemed to be savouring the moment, rather than rushing through it. There was a performative, theatrical element to it. 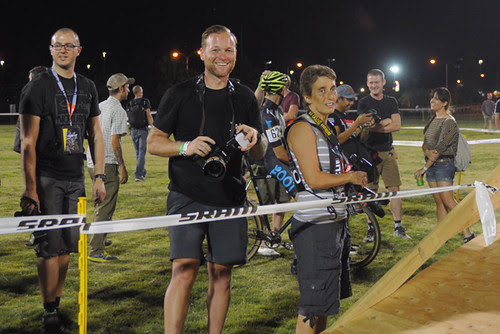 Photographers were everywhere, capturing the action with impressive lenses and flash units. John Watson's Cross Vegas photos on Prolly is Not Probably are especially worth a look. 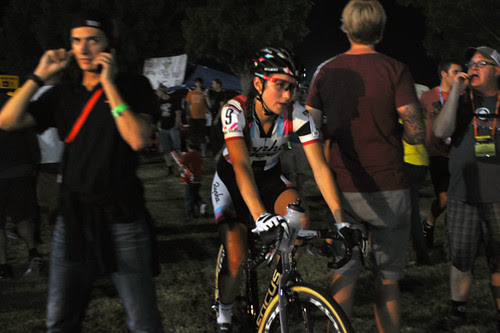 While my low-light snapshots are far from professional quality, they do reflect my experience of the event as a spectator: dark and chaotic, punctuated with bursts of light and blurs of colour. 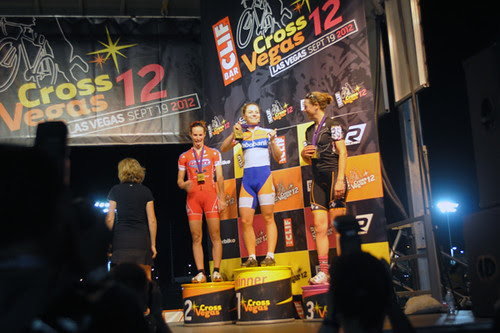 I am not sure whether any of this really explains what makes watching cyclocross fun. It is an evasive quality, but ultimately it is about entertainment - genuine entertainment. You don't even have to like sports or racing to enjoy it - though you might surprise yourself by developing a taste for beer and cowbells. 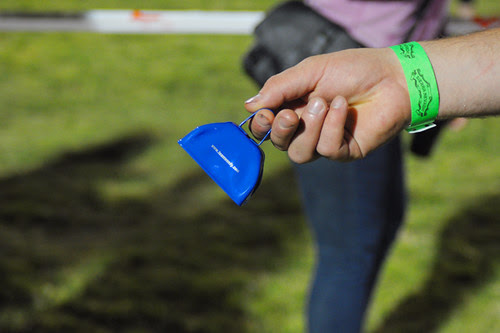 Accessible and awe-inspiring in equal measure, cyclocross strikes the perfect balance between a country fair, a bicycle race, and an alcohol-fueled block party. While the circus of Cross Vegas examplifies this more than typical races, it truly is the ultimate spectator sport.
Labels: bicycle events bicycle industry cyclocross Interbike races