The Risky Business of Attracting Women 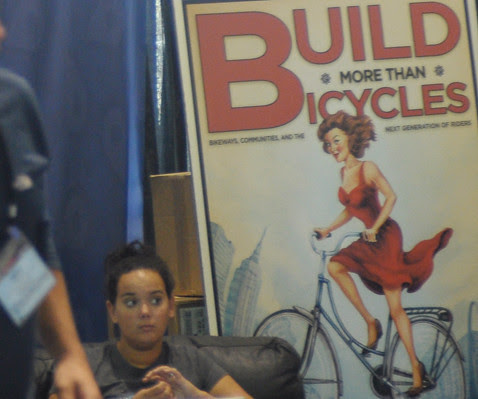 On my way to Interbike registration yesterday, I walked by the Bikes Belong booth as they were setting up their new poster. I snapped a picture, uploaded it to Twitter, and received a flurry of hilarious reactions - ranging from "Where does she keep her keys?" to "Find Cipo and reshoot the scene!"

Of course this is a reference to Elly Blue's "Is this thing sexist?" bike test. Modeled after the Bechdel Test for women in movies, the bike test asks:

1. Are women present or represented at all?
2. Are the women presented as active subjects rather than passive objects?, and
3. If the gender were reversed, would the meaning stay more or less unchanged? (Or would the image become hilarious?)

Showing a woman pedaling a bicycle, the poster passes points 1 and 2. Assessing point 3 is trickier. Of course a poster of an identically dressed male would look ridiculous, but that's taking it too literally. What about a young male dressed in tight-tight cutoff shorts, a plaid shirt flapping open in the breeze, and a pained, sexy expression on his strategically unshaven face? I'd consider that the equivalent, in which case the meaning would indeed remain unchanged. So I say the Bikes Belong poster passes.

Still, images of women cycling in dresses and heels seem prone to rubbing us the wrong way. It is hard to describe what brings about the sense of unease, especially for those of us who actually wear dresses and heels on a bike. Often it boils down to subtle things: A coy facial expression, an unnatural posture, a too-conveniently billowing skirt... Point is, from a marketing perspective, images designed to attract women to cycling seem inherently risky. Too sporty or gender-neutral, and they can be read as "there is no place for femininity on the bike." Too feminine and they can be read as gendered, objectifying, or downright pornographic. The line between attracting women and offending them is blurry. 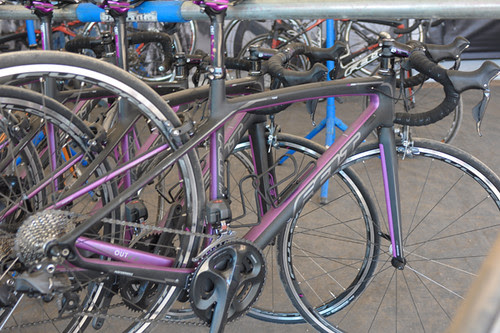 And while the sphere of roadcycling seems far removed from transportational advocacy, the same basic theme arises - see, for instance, Bike Shop Girl's "The Bike Industry Needs More Women Like Liz Hatch". When speaking to Felt Bicycles later in the day, the question of colour and graphics came up as well. When I commented on the dark violet hue of Felt's new women's road model, the representative explained how difficult it is to develop a colour scheme for women's lines of bikes. On the one hand, there is now a great deal of criticism hurled at anything pink, pastel or flowery. On the other hand, gender-neutral colour schemes don't sell as well. Women want something feminine, but not too feminine. They do not want a caricature of "girl bike," but they do want it distinguished from the men's models. I have heard exactly the same thing from the manufacturers of athletic cycling clothing. There is now almost a stigma to producing a women's jersey with any trace of the colour pink or flowers on it. Yet there is demand for feminine styles. Designers have to get a lot more creative these days in coming up with those styles; hitting just the right note is tricky. 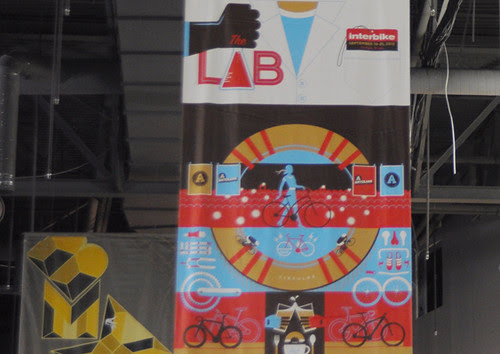 Still, I believe the bicycle industry will keep trying. With women referred to as the "indicator species" for the success of transportational cycling and with the push for more women in cycling as a sport, the pressure is coming from all directions. As both manufacturers and activists struggle to figure out how exactly to market to women, we are likely to see some interesting results in the years to come.
Labels: bike shows gender Interbike