New Kids on the City Block

It is always exciting when a new bicycle company appears on the market, and so it was doubly so when two new brands of city bikes were introduced at Interbike this year: the Toronto-based Simcoe and the Detroit-based Shinola. 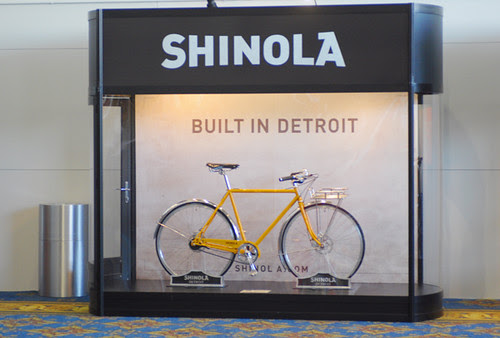 The Shinola display greeted visitors as they entered the front hall of the show. Above the yellow French-inspired city bike were the intriguing words "built in Detroit." Walking past the display several times, I listened to attendees debate whether this claim could be true. After all, many bicycle manufacturers state that a bike is "built" locally, when what they really mean is assembled. If it were true, however, wouldn't it be wonderful and ironic to bring domestic bike production to a city known for the former glory of its automotive industry. That was the gist of the buzz. 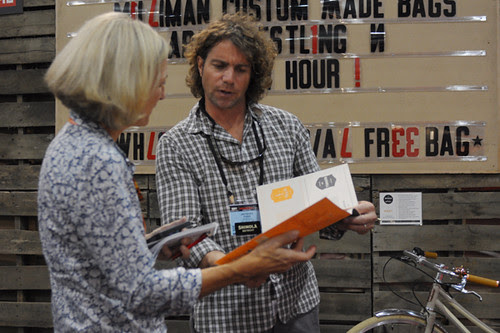 Later I spotted a company representative and spoke to them about the bikes. Some may recognise the Shinola name as a brand of shoe polish from the early 20th century. Recently, the name was resurrected and turned into a lifestyle brand that plans to sell not only bicycles, but also watches, leather goods and notebooks - all made in the US. 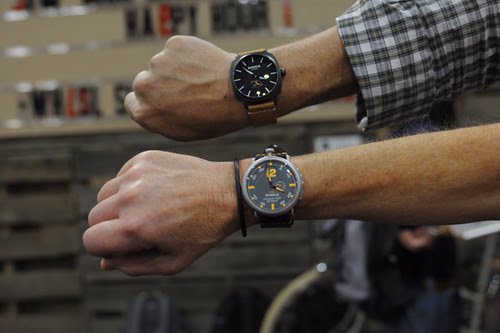 In the bike industry that kind of approach does raise some eyebrows. Can a manufacturer be serious about bicycles if it is not their sole focus? Then again, there are those brands that start with bicycles, then expand into bags, clothing and other items. In that sense, the main difference in Shinola's approach is that they intend to do this from the start. 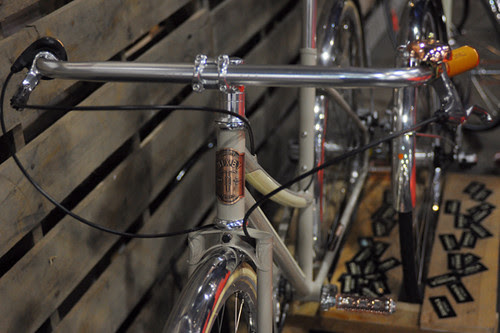 As for the bicycles themselves, yes the frames will indeed be handbuilt in Detroit. As I understand it, the initial prototypes were built by Ira Ryan and Tony Pereira in Portland, OR, but production models will be made by Waterford. Prototypes of the first bikes - the diamond and step-through Bixby - were on display at Interbike. 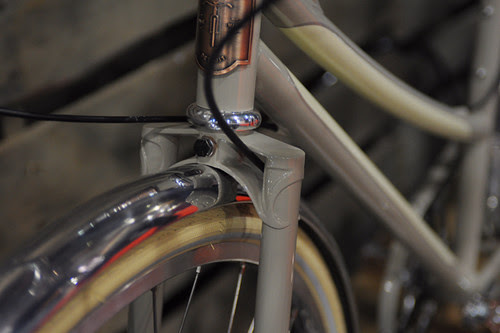 There are some handsome details on these steel frames, most notably the biplane fork crown. 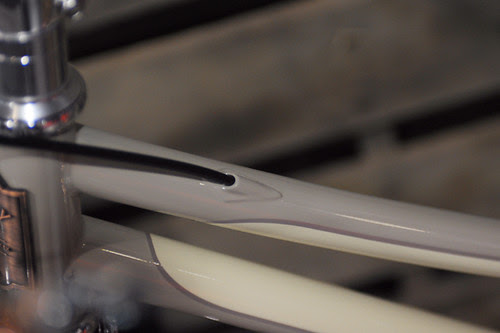 Points of entry for the brake and shifter cables are subtly incorporated into the frame design. 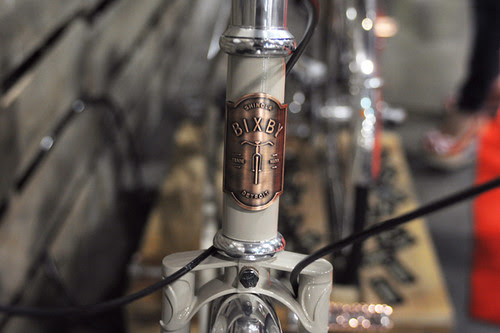 The copper headbadge is embossed with the bicycle model name. 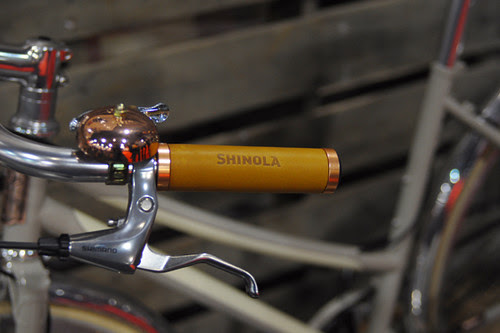 One benefit to the company being involved in the production of other products, is its ability to outfit the bikes with its own accessories - such as these Shinola leather grips. 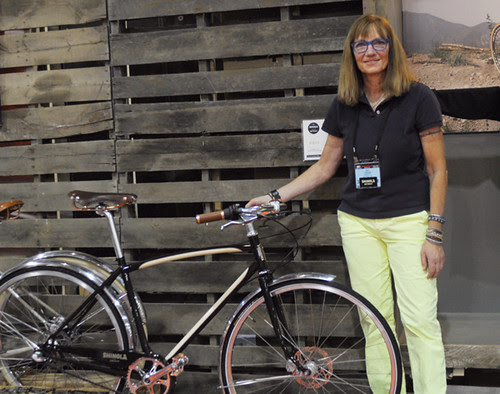 To create the Bixby, Shinola recruited designer Sky Yaeger - who has previously worked at Bianchi and Swobo and is credited for bicycle models familiar to many. Reading that she was responsible for the Bianchi Milano design, I realised that the curves of the Bixby remind me of that aesthetic. I wonder how they will handle racks and lighting once the bicycles go into production. 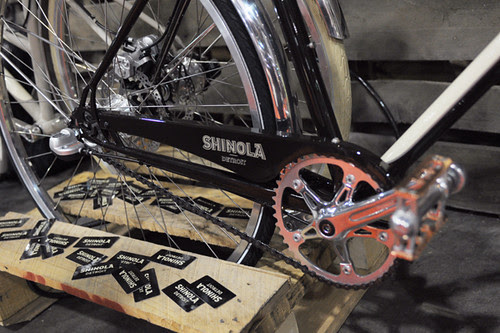 While I can't speak for the ride quality, the finish and components of the Shinolo Bixby bicycles are of a higher caliber than what one will see on a typical city bike in stores today. This, combined with the Detroit-built frames, will make for a high retail price. It remains to be seen whether customers will appreciate the bicycles enough to pay it. 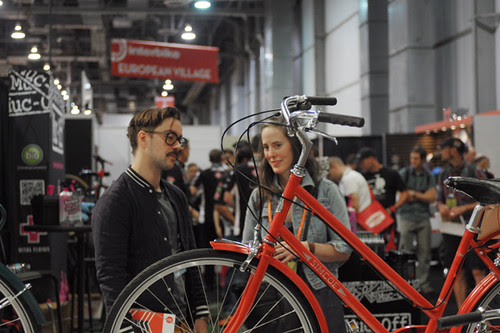 At the other end of the spectrum, Simcoe's focus is on classic, affordable city bikes. It is the new house brand of the Canadian bicycle distributor Forth Floor. North American retailers have been familiar with Forth Floor for years, as they've been responsible for importing a variety of European city bike brands, including the latest brand to hit North America - Bobbin. The high demand for Bobbin's looks/quality/affordability ratio is in part what inspired them to start their own project. As a distributor, Forth Floor has gained a reputation for being knowledgable, reliable and easy to work with - which makes many optimistic about the success of their manufacturing practice. 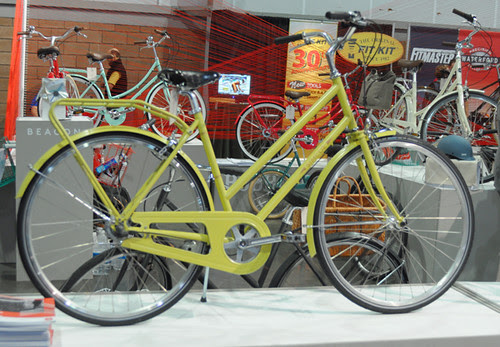 The introductory line of Simcoe bicycles is uncomplicated: traditional diamond and step-through frames made in Taiwan, equipped with swept-back handlebars, fenders, rear racks, chainguards and a choice of 3 or 8 speed gearing options. 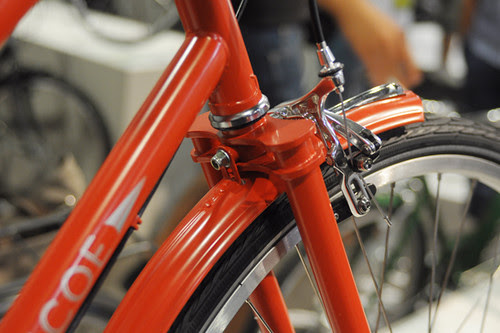 Like the Shinolo frames, Simcoe's are welded, but the forks feature attractive double-plated crowns. It is no secret that I love these crowns; I am pleased to see them become a trend again. 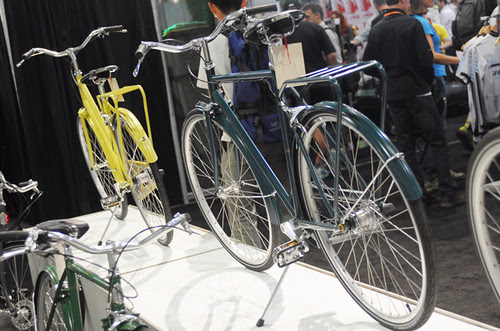 The models will be available in a small range of colours, both bright and subdued. 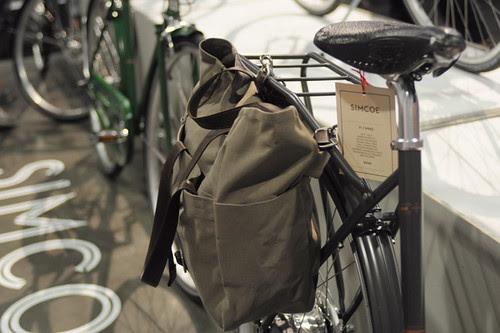 The slate gray step-through is probably my favourite. 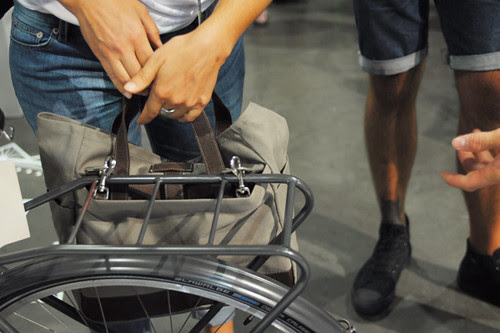 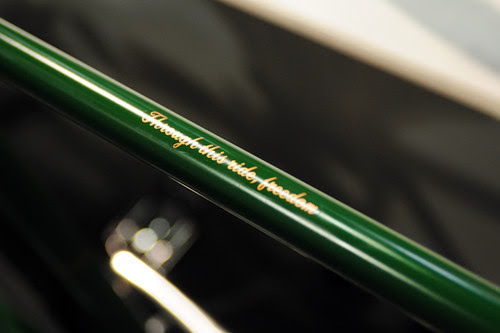 "Through this ride, freedom..." 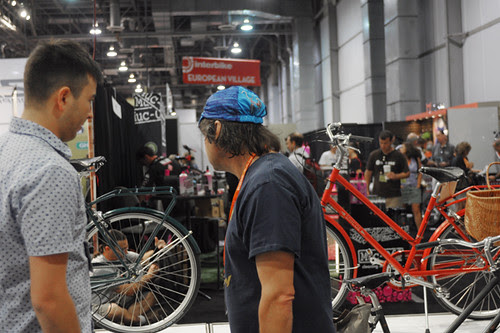 These are all simple, been-done-before ideas; nothing radical or new. But retailers are paying attention, because frankly there is demand for more bikes of this category without the hassles and the markups that come with importing from Europe. 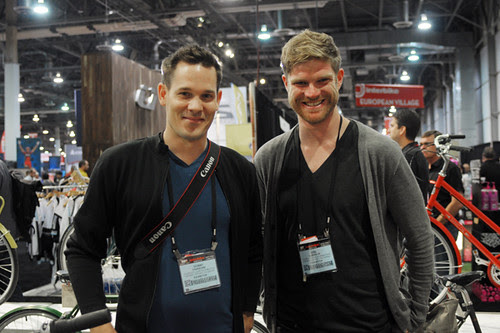 Interacting with the fellows at Forth Floor is a pleasure as usual. I learned that Donny (on the left) has recently taken a framebuilding course with Mike Flanigan and made himself a nice touring frame. 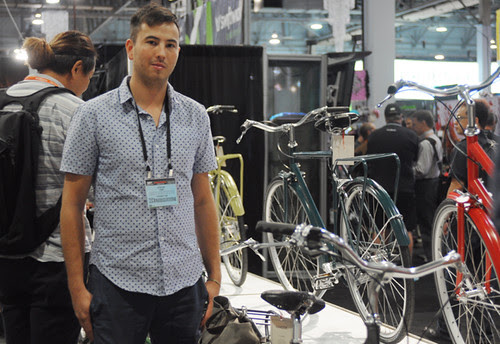 Steve is working on a side project making tiny, affordable LED bike lights (Beacon Bike Lights) that can be zip tied to any part of the bike. 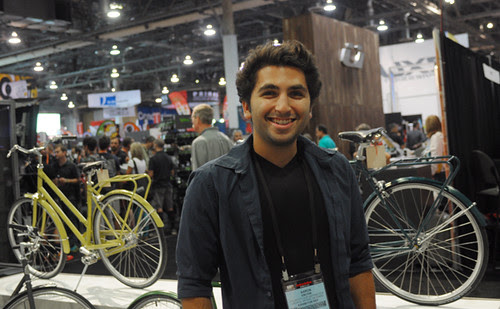 The guys are, first and foremost, cyclists. They love bicycles, all kinds of bicycles, and they communicate a sense of commitment to being in the industry for the long haul. 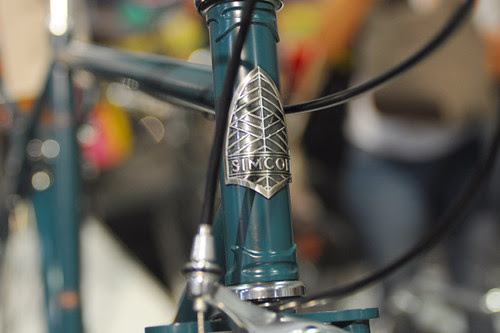 How that will translate into the quality, appeal and sustainability of the Simcoe brand remains to be seen, but retailers seem cautiously optimistic.

Both Simcoe and Shinola represent the North American market increasingly embracing transportation cycling and seeking to establish itself as independent from European culture and European bikes. These brands will be welcome additions to Linus, Public, Urbana, Handsome Cycles, Heritage Bicycles, Brooklyn Cruiser and other American-based companies with a focus on city bikes. I will share information on pricepoints once the figures are available, and will hopefully get a chance to test ride both bikes.
Labels: bicycle industry bike shows Interbike