While I neither own a cargo bike nor intend to own one any time soon, I love the the idea of them and like to live vicariously through those who have them by asking about their experiences. The cargo bike owners/shoppers I talk to are mostly North Americans and I notice that overall they are opting for long-tail bicycles over front-load box bikes. In large part this is because these cyclists tend to live in hilly, bike-unfriendly suburbs that do not lend themselves to the comfortable but unwieldy box bikes. Long-tails, on the other hand, are said to handle with the maneuverability and responsiveness of regular bikes, while allowing room for extra cargo in the extended rear. At Interbike this year there were long tails from all manner of manufacturers, roughly half of them, it seemed, touting electric assist. But rather than feature every random concoction, I will focus on some trusted manufacturers that have come out with updates and new designs. 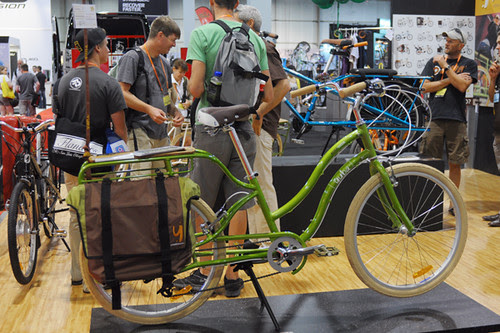 Yuba had its new "midtail cruiser" on display, the Boda Boda. Named after African bicycle taxis, this model was created in response to requests for a slightly shorter wheelbase and a lower stepover. Featuring 26" wheels, fat tires, swept-back handlebars and derailleur gearing, the aluminum-frame bike weighs 35lbs, is rated to carry over 200lb, and retails for $1,000. 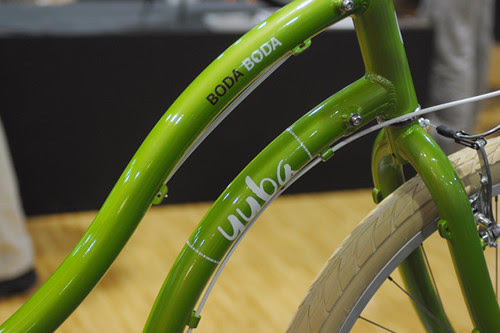 The Boda Boda is described as comfortable, in that it "rides like a European townie bike – upright and casual," yet "will get you there and back, even in hilly San Francisco." Studying this bike I admit skepticism regarding that last part, but I am willing to keep an open mind and will gladly test ride a Boda Boda if the opportunity presents itself. As I stood next to the bike, a couple of women came along and talked at length about how delighted they were with the lower step-over; the bike looked friendlier and more accessible, they said. 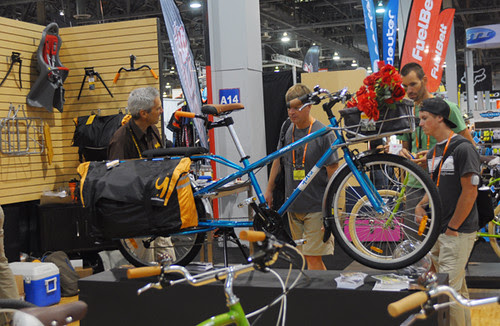 The original Mundo model was on display as well, fitted with Yuba's frame-mounted Bread Platform front rack (rated for 40-50lb). Though I rode a Yuba Mundo a couple of years ago, the short ride did not leave me with an impression I can now recollect, so I would like to try again. Owners overall seem very pleased with this bike and describe the handling as speedy. 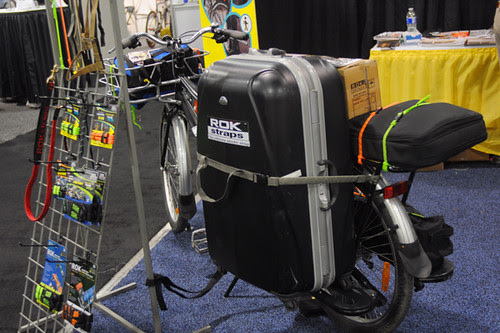 Between the Mundo, the Boda Boda and the various accessories available with the bikes, Yuba offers a range of choices at comparatively reasonable prices. I loved seeing this enormous suitcase strapped to the side of a Mundo with the help of Rok Straps. Who says you have to compromise on luggage when traveling by bike? 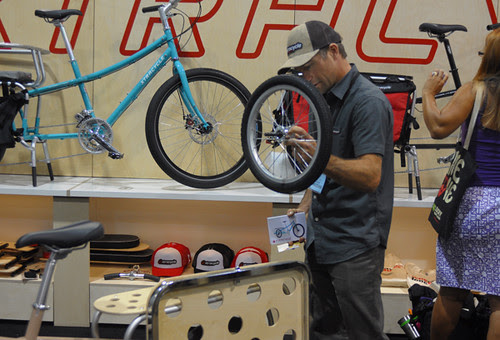 Xtracycle, the company that originally introduced the long tail concept, exhibited a range of bikes and accessories that practically turned their booth into theme park. Xtracycle makes two main categories of products: the Free Radical, which is a bike extender kit that can turn almost any normal bike into a long tail, and the Radish, which is its own line of integrated longtail bikes. The big news at Interbike was that Xtracycle will now be releasing a new bicycle model to supplement the Radish line - the EdgeRunner. This bike will have a mixte-ish, unisex frame and you can see most of it up there on the shelf in bright blue. Unfortunately, I dropped the ball on this one and have no decent pictures that show the entire bike. Mea culpa, and I hope you can imagine the last, long tail bit of it... 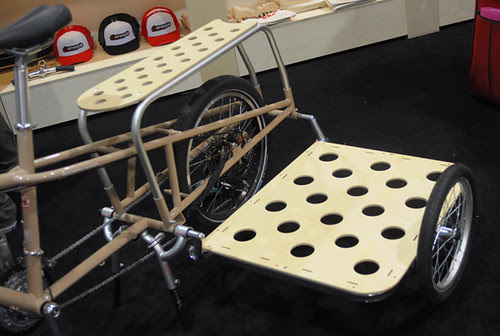 ...which looks just like this. This is a taupe version of the same model, and yes I only have pictures of the rear! What you see attached to the bike is Xtracycle's new folding side car accessory. 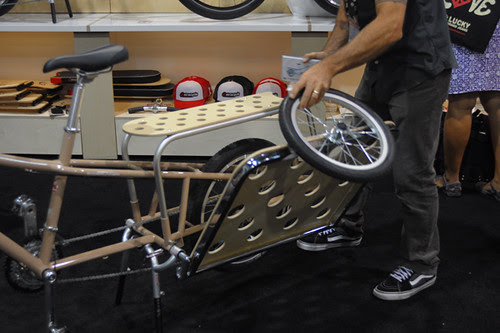 The cargo platform is fairly light, easy to install (onto an existing Xtracycle system), is rated to carry 200lbs of weight, and folds up when not in use. It looks very cool, though I do wonder how the bike handles on turns with the sidecar addition. Unlike most sidecars, this one pivots - but I imagine not so much when loaded with 200lb. 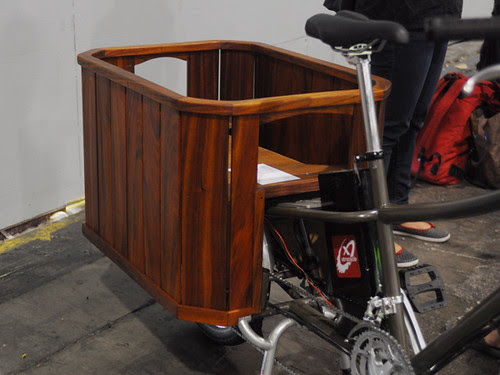 There were other prototype add-ons on display, like this slatted rear box that can be used for both cargo and small passenger transport. And yes, this is yet another incomplete shot of the new Xtracycles bike - this time in a gunmetal finish. 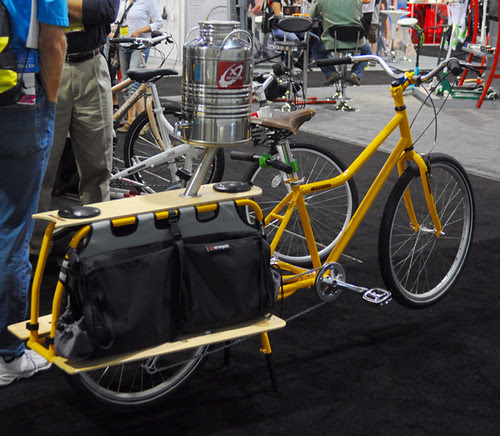 Also on display was a spruced up step-through Radish (there used to also be a diamond frame version, but I think they've done away with it?), in a new sunflower-yellow colour with matching stem. The steel Xtracyces are heavier that the Yuba bikes (40lb for the Radish), but are rated to carry more weight (350lb). 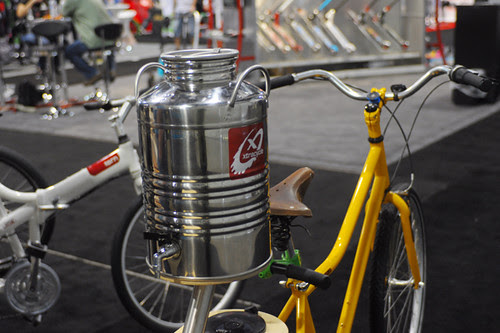 This yellow Radish was fitted with a prototype Party Deck platform that includes built-in speakers and a beer keg stand. 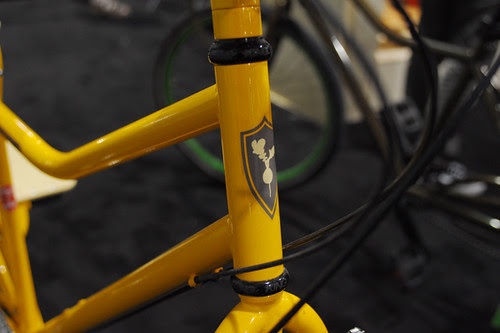 It's funny to observe how aesthetics can affect a bike's curb appeal. The yellow Radish is much more striking than the original beige/brown version and people flocked to it. 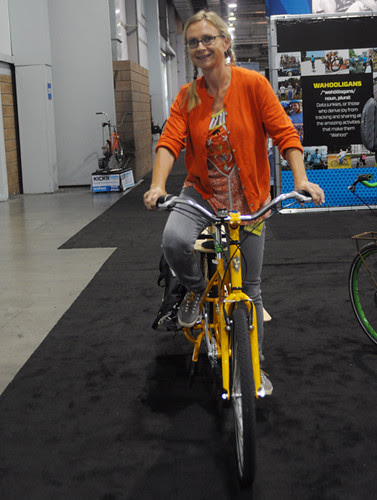 Visitors took turns hopping in the saddle, and I confess to riding it down the back hallway until a security guard gave me a look. I'd been wanting to try a Radish for some time, but the local bike shops do not carry them - so I talked to the Xtracycle fellows and they'll try to work something out. Based on my brief exposure to it, I really like this bike and would love to try it out on the road. Maybe even with a sidecar... 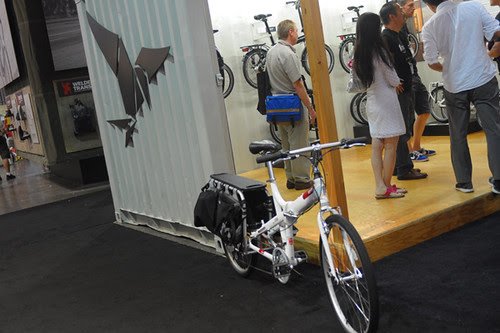 But the pièce de résistance of the long tail displays at Interbike was the collaboration between Xtracycles and Tern. Yes, that is a folding long tail you are looking at: the Tern Joe with an Xtracycle Free Radical rear extension. And yes, I rode it very briefly - but I can't really get a sense of a bike like this within the confines of a trade show. I am hoping a proper test ride will be possible in the near future. 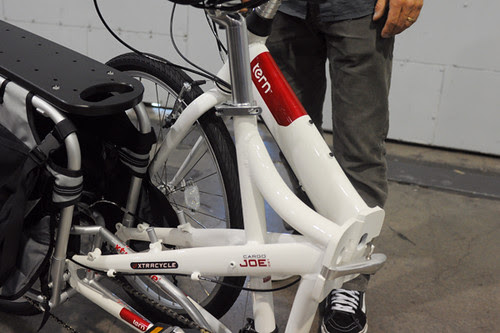 The result of the Xtracycles and Tern collaboration is the Cargo Joe: a 26" wheel folding longtail with an aluminum frame, hi-ten steel fork, and derailleur gearing, available in 3 sizes. Here is a blog post from Xtracycles showing it loaded up with a bunch of weight. 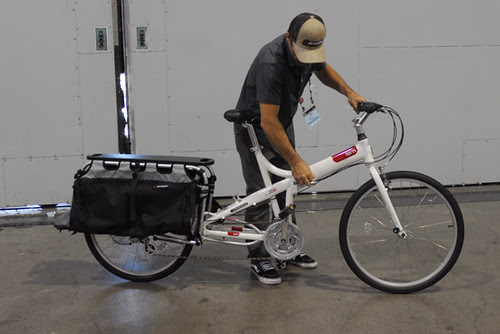 The simple fold takes about 30 seconds, with the frame unhinging in the middle. 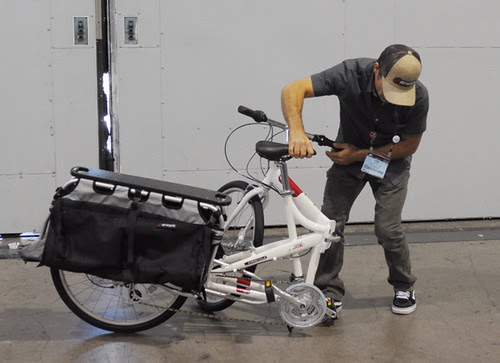 The folding bike then rests on the floor via a kickstand-type contraption under the bottom bracket. 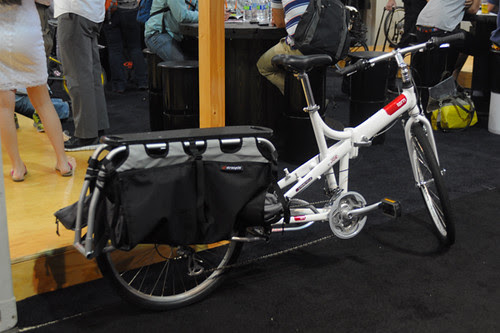 The retail price $1,000 for everything shown here, including the waterproof bags. Adding fenders and lights will increase the cost, but even with that taken into account it seems like a great value. As an owner of a Brompton that I often use as a mini-cargo bike, I can attest that having a bike that hauls weight and stows away compactly is invaluable for someone who lives in a small space, eliminating the problem of storing an enormous cargo bike. And while the Cargo Joe's fold is not minuscule, it nonetheless allows for easy storage, as well as for being taken on trains and in cars.  The possibilities are pretty amazing, especially for those who do not own a car. 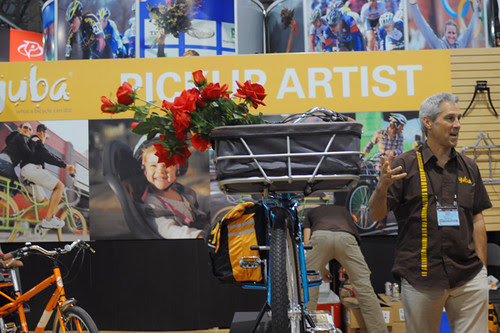 As far as overall trends for long tail cargo bikes, the main ones I noticed were lower step-over heights and a move toward greater compactness. If this reflects the nature of the customers who are buying the bikes, my guess is that there has been demand from more women, more apartment dwellers, and more multi-modal commuters. I am excited by the possibilities I am seeing with these bikes, and look forward to following the development of long tail designs in the years ahead.
Labels: bike shows cargo bikes Interbike