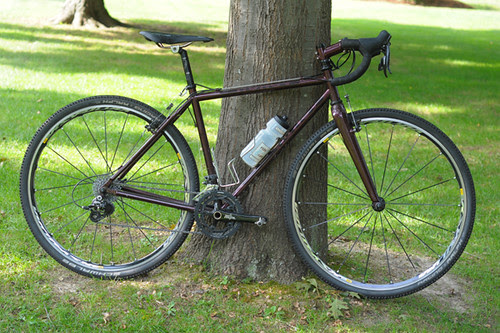 Aside from their obvious use for cyclocross racing, 'cross bikes can be a good choice for unpaved riding - something I've been apparently doing more and more of in recent weeks. So I wanted to try one and compare the experience to the 650B road-to-trail type bikes I've been riding thus far. Ride Studio Cafe's manager Patria offered her personal steed - a women-specific, true cyclocross racing machine from Honey Bikes. Patria and I are similar in height and we use the same pedal system, which makes it very convenient for me to try her bikes. One day when she wasn't riding it, I took the Honey out for a spin. 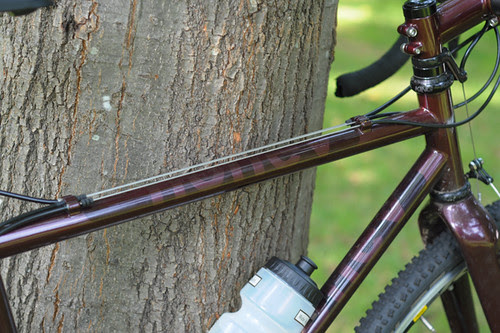 A small local manufacturer, Honey Bikes are a sister (or cousin?) company to Seven Cycles, specialising in modestly priced, handmade steel bikes. The Honey brand is not promoted aggressively, and the aesthetics are low key. Models include road, race, cyclocross, mountain, tandem and commuter bikes - each available in sizes configured for men and women, with size-specific tubing. The bikes are sold fully built-up with a selection of component groups and stock colours, priced starting at $2,000. These are not custom bicycles and the comparatively reasonable prices are achieved by sticking to stock configurations. However, the choices for those configurations are extensive - particularly the wide range of sizes. The cyclocross model is available in 12 sizes, ranging from 49.5cm to 62cm, measured by the top tube. 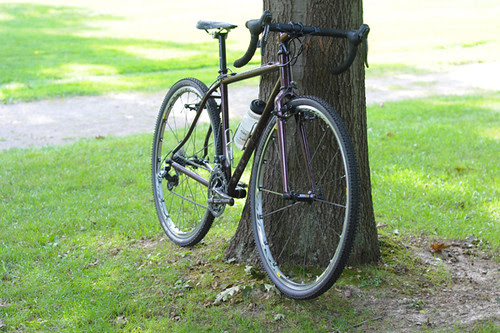 Patria's bike is a 52.5cm according to the Honey sizing system. The toptube slopes 8°, exposing quite a bit of seatpost despite my rather unaggressive bar to saddle height ratio (Normally the saddle is set up a tad higher than shown here). 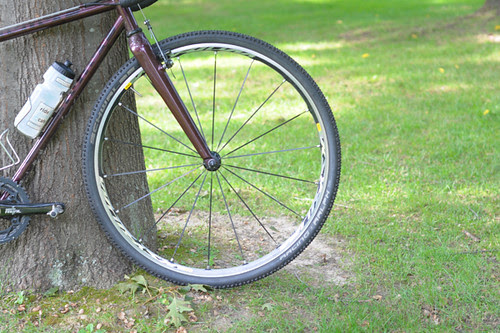 There is no toe overlap for me on this bike despite the 700C x 35mm knobby tires and short top tube. 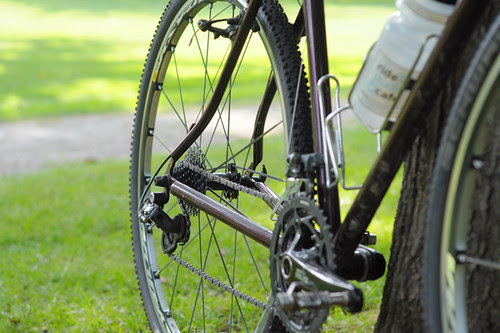 The frame has a nice flow to it and is cleanly finished; the welded joints appear seamless under the paint. For those in the know, the curvy stays and sculptural dropouts are tell-tale signs of the relationship to Seven. 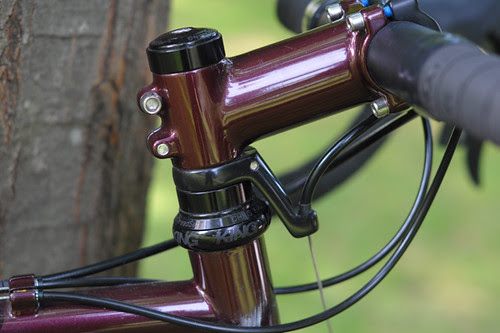 The body-colour stem and all-black components give a sense of unity and flow to the overall look of the bike. 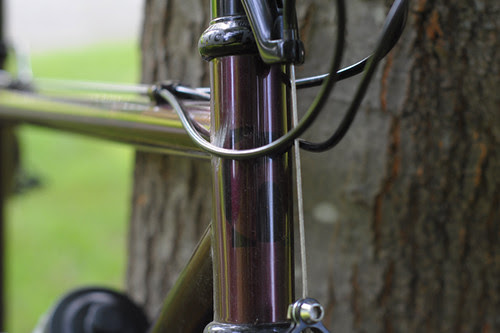 One interesting feature that is typical of cyclocross bikes, is the cable routing. All three cables - the shifter cables and the rear brake cable - are routed along the top of the top tube. 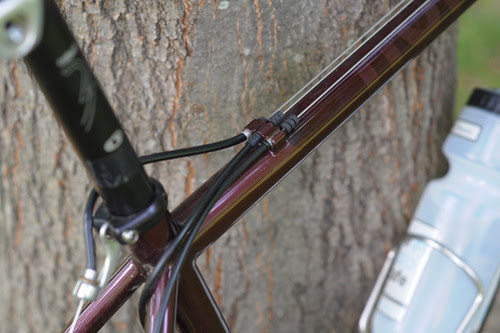 This is done so that cyclocross racers can carry their bikes more comfortably, and so that the shifter cables (normally underneath the downtube) do not get covered in mud. 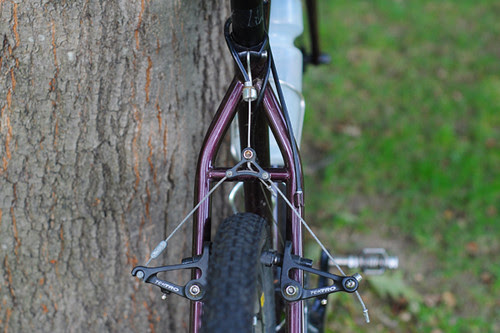 Also typical of cyclocross bikes are canti-lever brakes. These Tektro cantis worked adequately for me, though I still have not found brakes that work excellently on wide tire bikes. 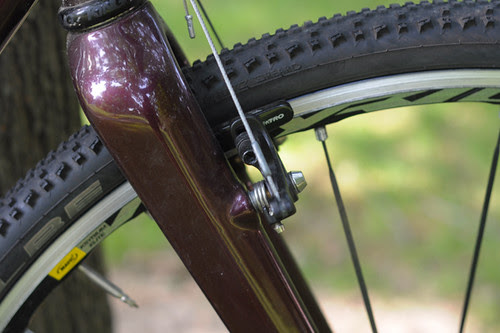 The carbon fiber fork is made for Honey Bikes specifically, with canti bosses. 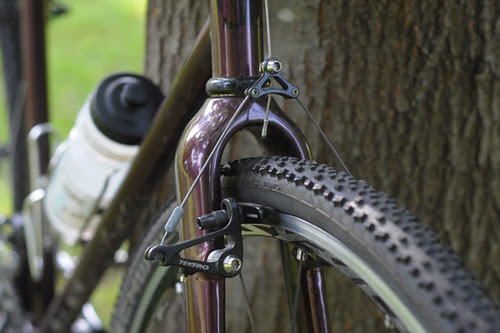 Lots of clearance for wide tires here, I believe 40mm being the maximum width. 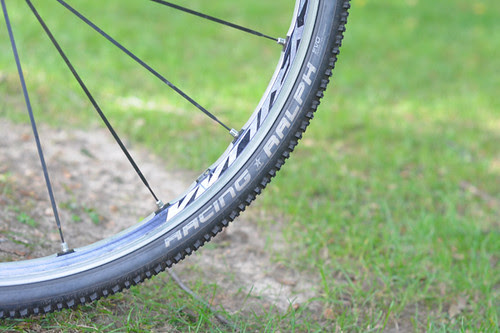 The tires on the bike when I rode it were Schwalbe Racing Ralph 35mm. 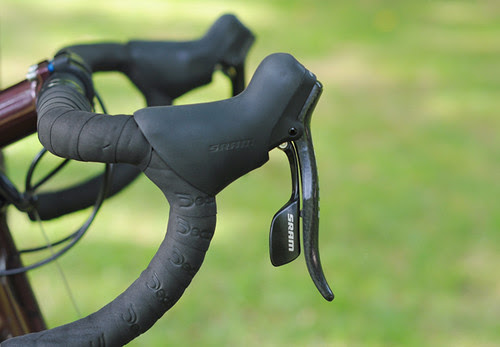 The SRAM Rival drivetrain and levers were new to me, but it did not take long to figure out the double-tap shifting. I can use SRAM brake levers much better than Shimano, though I still prefer the Campagnolo on my own bike. 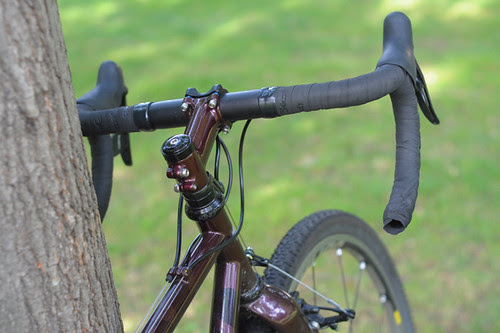 I rode the Honey on a local dirt trail, then on the road, then finally in circles on a grass lot before returning it to its owner. It was not a long ride - maybe 12 miles total. The ride quality over rough roads was smooth and the bicycle felt pleasantly floaty. At the same time, the wide tires were amazingly stable, and I fondly recalled the reassuring go-anywhere feeling of knobbies from my teenage years. However, that is where the sense of familiarity ended. Having ridden a Surly Cross-Check before, I thought that I knew what to expect from a cyclocross bike, but this was a different animal. As far as the handling, the novelty factor dominated my impression. The weight distribution was not what I was used to, and the bike felt somehow simultaneously more relaxed and more aggressive than the roadbikes I've gotten to know. I found myself standing up more than usual, and in general it was as if the bike wanted me to ride it differently than I normally ride. What I remember thinking was: "I can tell this bike is meant for something specific. But it's not meant for me." Still, the test ride was enjoyable precisely because of the novelty factor and the challenge of understanding the handling. I felt comfortable and reasonably confident on the bicycle, yet aware that it was designed for someone with a different riding style than mine.

Unlike me, the bike's owner actually races cyclocross. She finds the handling spot on, as do other cross racers who've tried it. The Honey is certainly worth considering for those looking for a racing bike just in time for the cyclocross season. 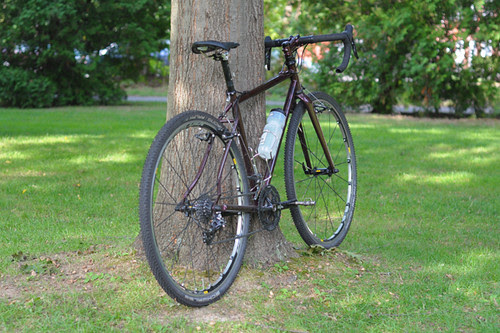 As far as general road-to-trail type riding for the rest of us... Well, in theory the Honey Cyclocross is suitable for that as well. I noticed that the gearing on the stock drivetrains is somewhat high, so you may need to tweak that. But features such as the wide tire clearances with no TCO, the canti/v-brake bosses, the variety of sizing options, and the lightweight components, are very appropriate. As described earlier, I would say the handling is rather particular; you may want to test ride the bike first. But that is exactly what I would say about low-trail 650B bikes, whose handling feels intuitive to me but strange to others.

For a US-made frame with an elegant contemporary aesthetic and mid-tier components, the price point of the Honey is certainly appealing. I am curious about their other models, and in particular find myself wanting to try the mountain bike. Those knobby tires have really put ideas in my head. Many thanks to Patria for lending me her Honey Bike! Full set of pictures here.
Labels: bicycle reviews handmade Honey test rides trails unpaved