Bicycle Bans in Parks and Cemeteries 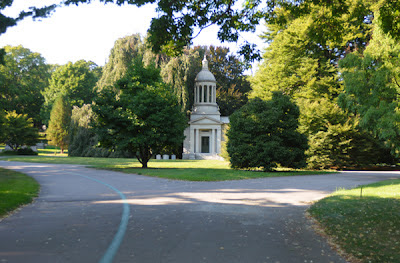 A number of public and private parks in the Boston area do not permit bicycles on the premises. Some cyclists complain about the ban, because the green spaces make for pleasant and convenient shortcuts through congested parts of town - for instance, the Public Garden and Harvard Yard. Others find it perfectly reasonable that some parks are reserved for being enjoyed at walking pace. I am mostly in the latter camp, and so it did not bother me to learn that the historic Mt. Auburn Cemetery I planned to finally visit this weekend did not allow bikes. 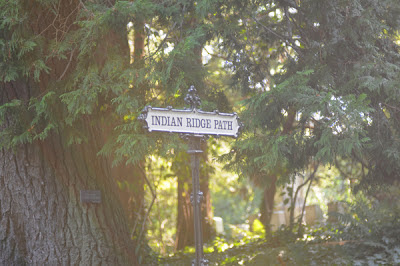 A morbid paradise of Victorian design known as America's first garden cemetery, this enormous park offers visitors miles of roads and winding trails. There are ponds, botanical gardens, wild woodsy areas, birdwatching opportunities, and a number of remarkable architectural landmarks. Although the cemetery is still active, the administration promotes it as a park and encourages both local visitors and tourists. A brief list of rules asks to be respectful and refrain from activities such as picnicking, sunbathing, jogging and cycling. However, as I learned during my visit, motor vehicles are allowed. The ban on bicycles is not part of a vehicular ban, but a recreational one, which puts things in a different light. What of those who use bicycles for transportation? The reasoning behind cars being permitted, is that it can be challenging for the average person to explore the vast grounds on foot. The noise and exhaust fumes the cars produce, as well their effect on the pedestrian visitor experience (those walking must stop and move aside in order for a car to pass on the narrow roads) are all excused to accommodate their transportational function. Would bicycles really be more of a nuisance? It seems to me the logical and fair solution would be to either close the park to vehicles entirely (except for maintenance work and funeral processions, of course), or to allow both cars and bicycles.

Rules regarding bicycles in parks are a reflection of cultural perceptions. Are bicycles inherently offensive in a cemetery because the very sight of them suggests recreation? Or are they legitimate vehicles that - unlike cars - will help protect the tranquil nature of the grounds, flora and fauna?
Labels: Boston social commentary trails transportation options