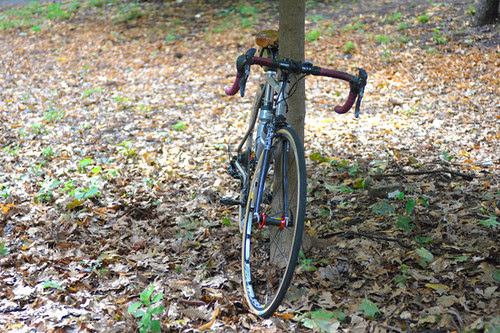 Every year I am caught off guard by the suddenness of Autumn. Winter's many false starts herald its arrival well in advance. Spring approaches with the tentativeness of a fawn. Then Summer rolls in with a lazy insistence. But Autumn just is. One day I wake up knowing that yesterday it was summer but today it is Fall, and there is no undoing it. The smell in the air is different. The light is different. The mood is different. It is done.

I cannot explain what causes the overwhelming bouts of sentimentality and nostalgia (for nothing in particular) that grip me during this season. And I am hardly alone in succumbing to this clichéd state. A film director need only show a scene of a park strewn with golden foliage, throwing in a Chopin prelude for background music, for the audience to be filled with a delicious sense of longing - for what they do not know.

But I know what I long for when I smell that crisp scent of dry leaves and behold the slanted light. Cycling. Yes, cycling cycling cycling. And after that, cycling. Monsieurs Chopin, Satie and Tschaikovsky, ready your soundtracks: I'll be playing them in my head as imaginary background music, while cycling.

Many feel that summer is the optimal cycling season, but for me it's a sluggish time when I am just not in my best form. Not that I haven't been riding. If anything, this summer I've learned to deal with heat much better than I thought myself capable. But honestly I just wasn't enjoying cycling as much as I did over the winter and spring. In 95° heat with high humidity, my legs felt as if they were perpetually pushing through molasses. The pressure and stickiness in the air were oppressive.

Then one morning I awoke to find the oppressiveness gone. It was still August, but no matter: Autumn was here. Sensing the ever-so-subtle change, it was as if my body snapped to attention and pulled me toward my roadbike while I struggled to focus on making coffee. On that day a friend took me up a little mountain and I hardly noticed I was climbing it until we were halfway up, so filled I was with this new energy. On that day my cycling season began.
Labels: roadcycling stories