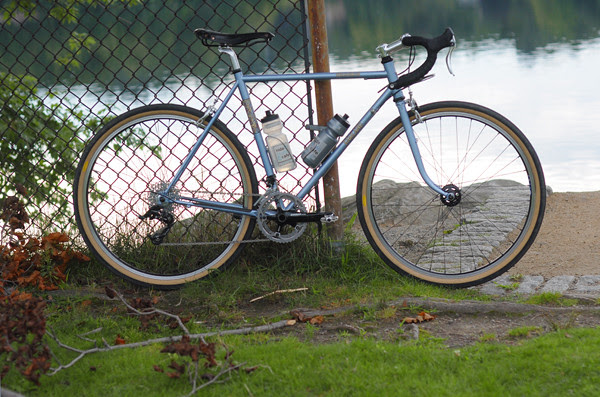 The Nordavinden is a newly released bicycle model from the small West-Coast company Rawland Cycles. Earlier this year I featured a friend's Rawland rSogn, which I could not ride because it was too big. At the time Rawland did not make a bike in my size, but they informed me that one would be coming out later in the year. We talked about a test ride, and as luck would have it, a demo bike was ready just before D2R2. I had it in my possession for a nice long weekend - most of it spent riding local and not so local dirt roads. 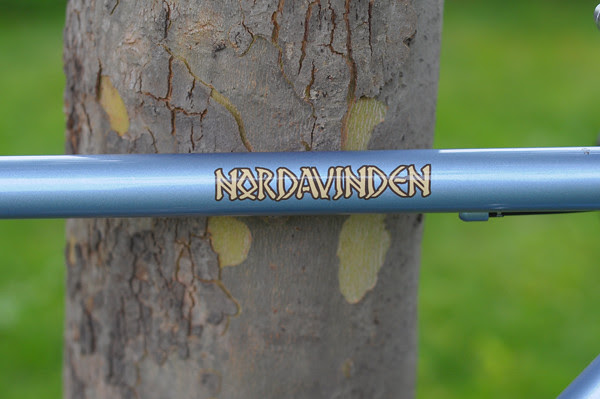 Norwegian for "the north wind," the Nordavinden was designed as a lighter, sportier frameset than its more rugged predecessors: a zippy bike with low trail geometry that accepts fat tires. Full geometry and tubing specs are available here. Like all Rawland models, the Nordavinden is designed in California and handbuilt in Taiwan. 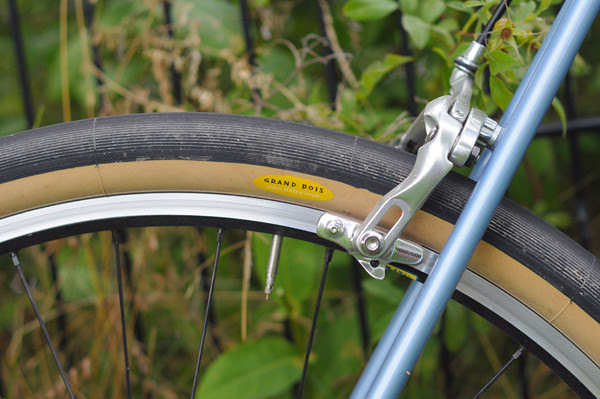 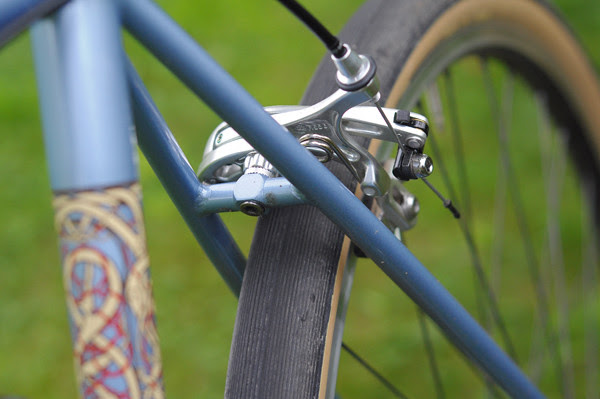 The frame is designed for sidepull or centerpull brakes. The demo bike came fitted with Rivendell's (discontinued) Silver big-mouth sidepulls. 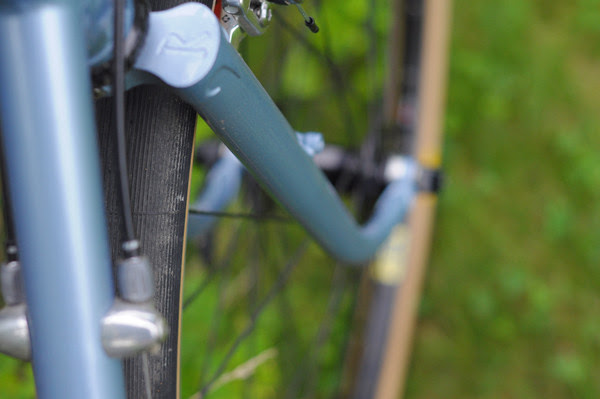 The dramatic curvature of the fork is immediately noticeable - prompting lots of low trail questions from those who saw the bike whilst in my possession. The trail is 30mm, with 650Bx42mm tires. 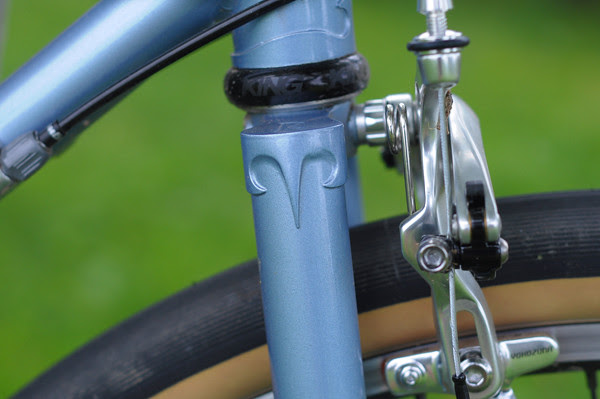 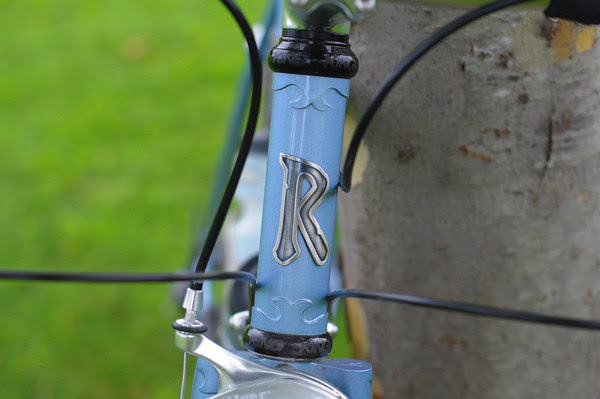 The "ice blue" paint is a light, shimmery sky-blue. I tried to take some pictures that eliminated the shimmer and showed the true colour underneath. In person, the shimmer makes the blue look lighter. Compared to the (very similar) colour of the rSogn, the Nordavinden is cooler and a bit more saturated. 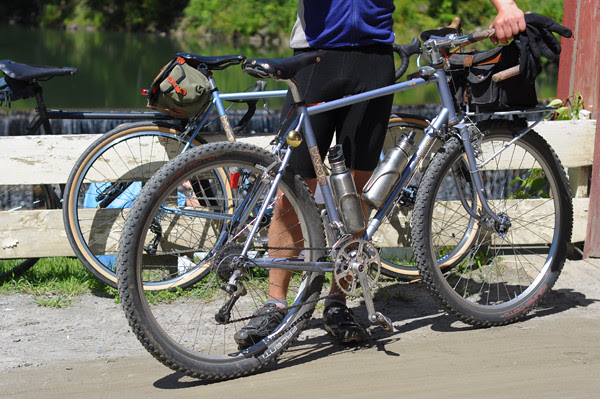 Looking at the Nordavinden next to the rSogn (front), they are similar at first glance, but less so upon closer inspection. The Nordavinden has an almost level top tube (1.5° slope), compared to the rSogn's more prominent slope. The Norvavinden's appearance is sleeker and more roadish - with fewer braze-ons, narrower tire clearances, lower bottom bracket, shorter chainstays. 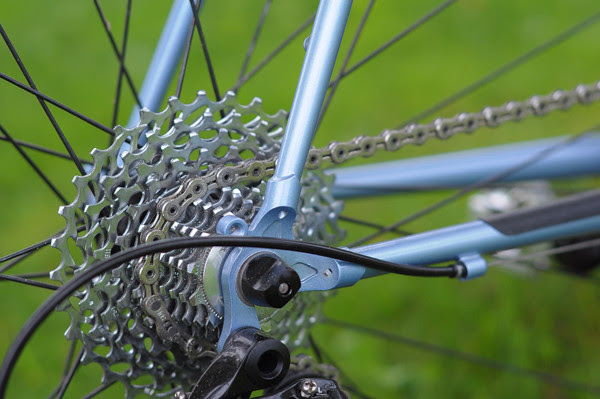 Still, the Nordavinden is sufficiently versatile, with eyelets for fenders and braze-ons for a front rack (on the fork blades; optimised for Rivendell's Nitto Mark's rack). 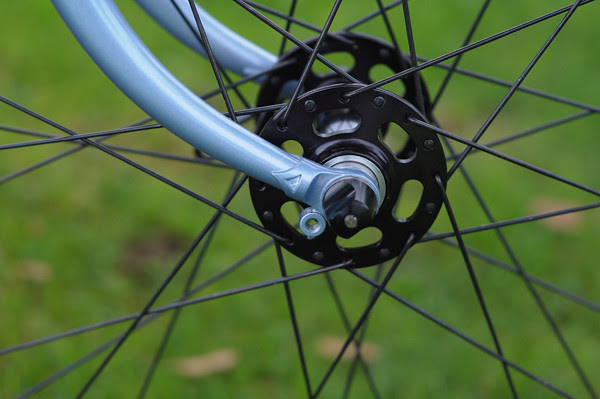 The frame itself is welded cro-moly steel, with some decorative flourishes. 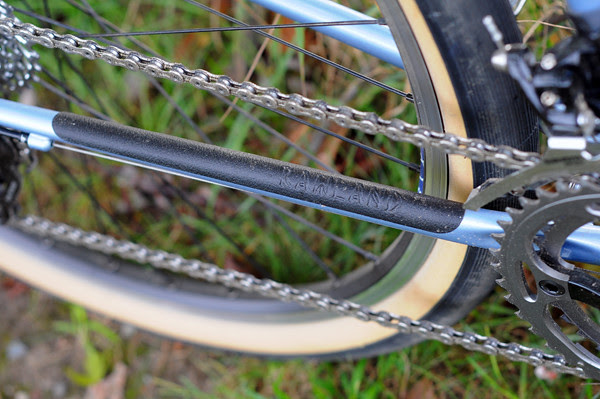 A Rawland chain-slap protector is included with the frame set, 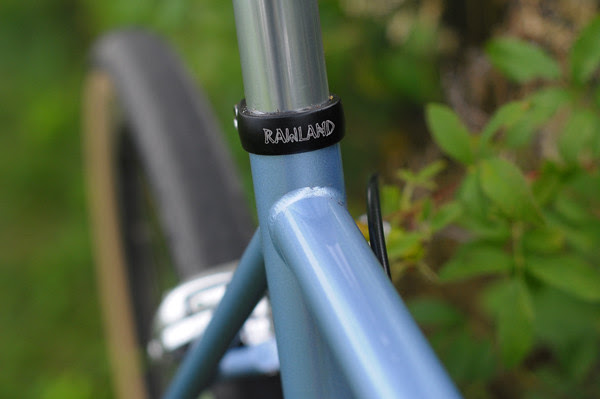 As well as a Rawland seat collar. 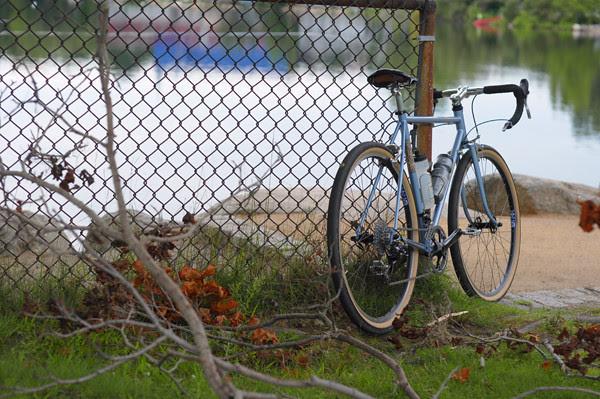 The size Small is described as a 54cm frame, measured by its top tube. My ideal frame size for a road fit would have a 53cm top tube, but the small Nordavinden worked nicely with a slightly shorter stem. 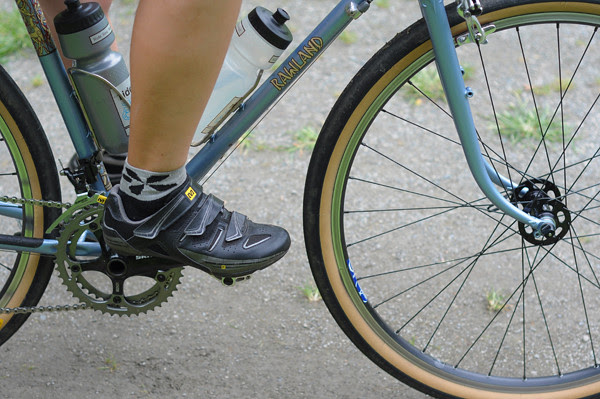 Rawland advertises no toe overlap in any of their frame sizes. This held true for me (in size 38 clipless shoes), with room for a fender. 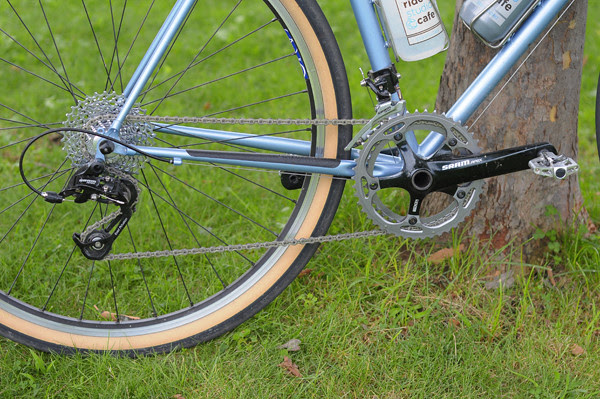 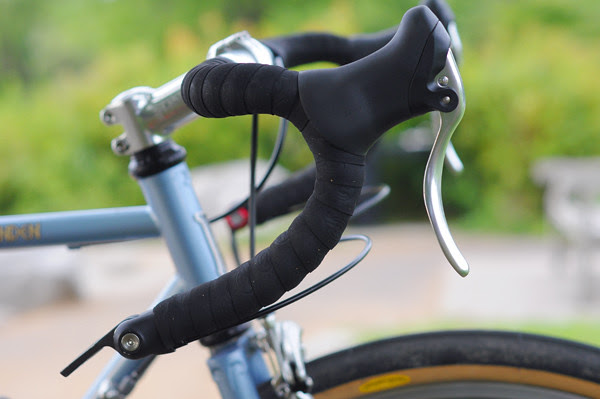 Chris King headset, Soma threadless stem and handlebars, Tektro short reach brake levers and bar-end shifters. The build was not done for me specifically, but I did have a say in stem length and handlebar width, to ensure the bike would fit me. Were this my own bicycle, I would do some things differently for sure. But sometimes it can be interesting to use unfamiliar components. 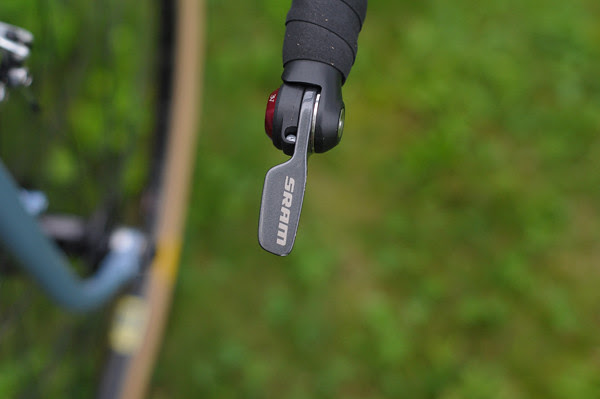 For shifters, I had a choice between SRAM brifters and bar-ends, and opted for the latter. Prior to this I had not used bar-end shifters in over a year, and it took me a bit to free my brain from Campagnolo ergo mode. By the end, the SRAM bar-ends grew on me, though I still prefer Campagnolo ergos on my own bike. 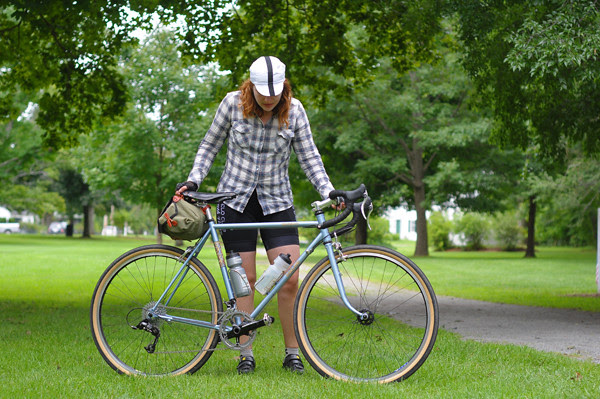 I used my own pedals and saddle, and installed two bottle cages. The bike did not come equipped for carrying a front load, as it was optimised to do, so I used a saddlebag when I needed to carry a camera and other items. The bike - as shown here, but without bag and water bottles - weighed just over 24lb. 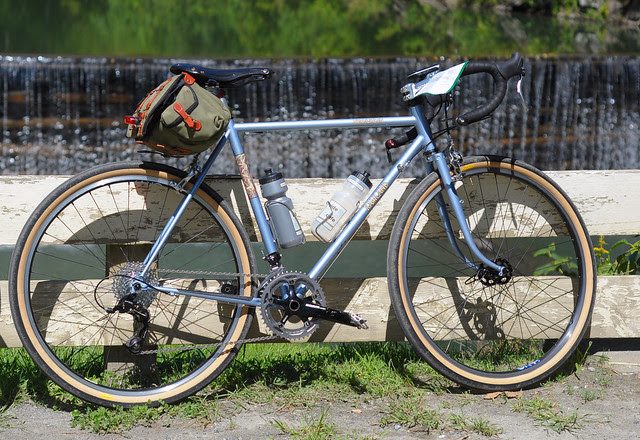 I rode the Rawland Nordavinden for a total of 150 miles over the course of 4 days. First was a 30 mile shake-down ride, which included 12 miles of local dirt roads. The following day, I rode a 50 mile route at the D2R2, over half of which was dirt. The day after, I did a 40 mile local ride that included a paved road, a dirt road, and a rather technical dirt trail. And after that, I did a final 30 mile ride on paved roads - including a couple of hill climbs -  before returning the bike. 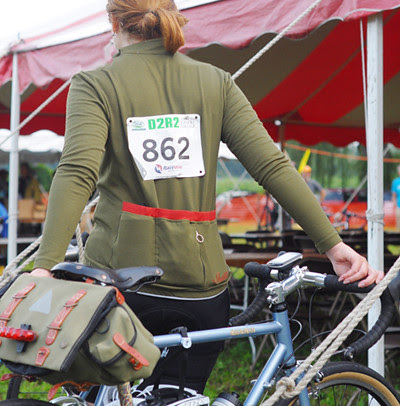 What I noticed about the Rawland immediately, was that my sense of balance was different on it than on other roadbikes I've ridden recently. I found tight cornering easier than it typically is for me, and I found it surprisingly easy to change my position on the bike without disturbing its balance - allowing me the freedom of activities I usually have trouble with, such as drinking from the water bottle while riding. I remember similar handling when riding the Royal H. Randonneur last summer, but this time I think I was able to appreciate it more - particularly on unpaved terrain. At the D2R2, I was able to descend on loose dirt and gravel faster than I was comfortable doing previously, and to drink all the water I wanted without having to stop. It certainly added to my enjoyment of the day. The following morning, I rode unceremoniously on a somewhat challenging local dirt trail that I've never been willing to ride before. 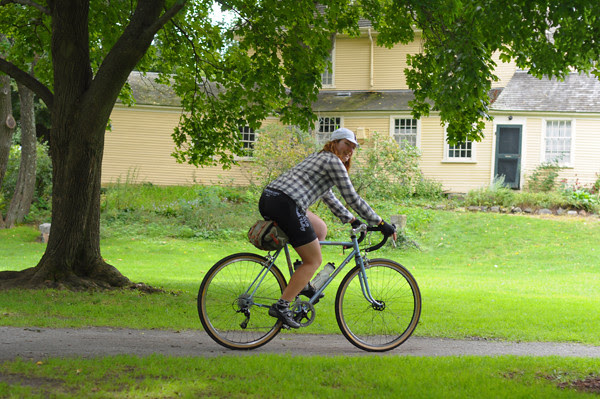 As far as speed, the Rawland is plenty fast and accelerates with no hesitation. There is a snappy, responsive, roadish feel to it. On pavement it is not quite as fast as my Seven roadbike, and it does not climb quite as effortlessly. But as soon as the pavement ends, the dynamic changes. It's as if the two bikes were made to be friends and supplement each other. The Rawland glides over dirt and gravel, seemingly preferring them to pavement. In part, of course, it is the wide tires - which don't bounce me around the way narrow road tires do. But it's also the handling - again, that peculiar flavour of maneuverability that comes with low trail - that makes it easy for me to pick a line through rutted out areas and to corner on loose sections without reducing speed. On a bike with standard front end handling, I feel less confident riding on winding, unpaved roads and trails - especially descending. This preference might be particular to me, I don't know. But I found the Rawland's handling exceptionally agreeable for riding on dirt. 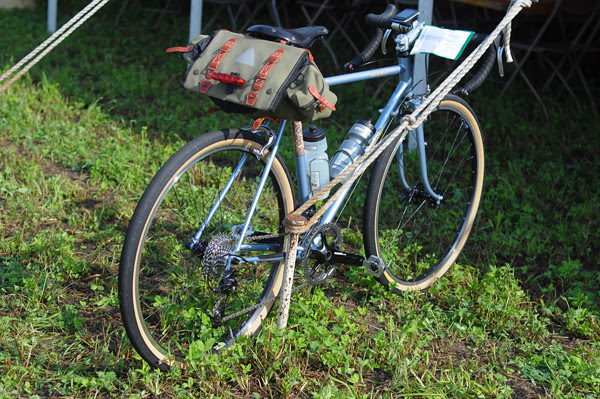 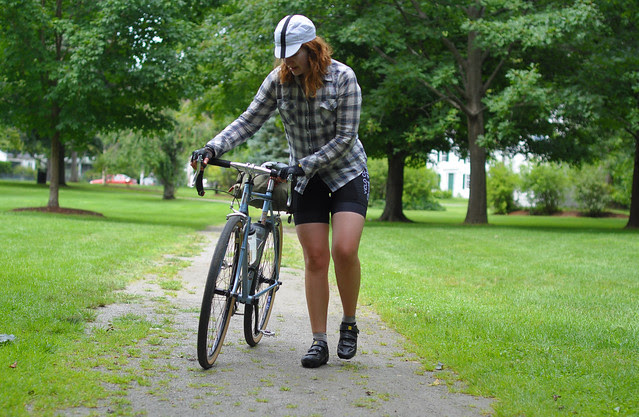 To think of criticisms is not an easy task here. I suppose I would like the bike even better if it were lighter, though I recognise the weight is pretty good for a bike of its kind. Another thing I can say is that I am fairly spoiled at this point as far as ride quality, and from that perspective the Rawland is not the cushiest bike I've ever ridden. It isn't a harsh ride by any means, but I feel that much of the cush is due to the fat tires - and that with narrower ones I would feel the bumpy roads more. Finally, as I've mentioned already, on pavement the Rawland is not as fast as my Seven - but then I don't think it makes sense to pit them against each other; they are not meant for the same kind of riding. I would not mind owning a bike like the Rawland to supplement my skinny tire roadbike. 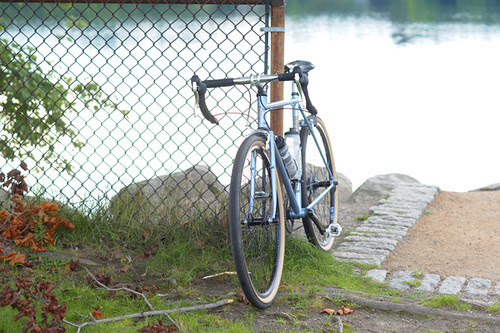 While showing off the demo bike, more than a couple of times I was asked why only the smallest Nordavinden size is offered in 650B. I must say I wonder as well, as it is precisely the combination of the wide 42mm Grand Bois Hetre tires and the handling that draws me to the bike. There is demand out there for lightweight, sporty low trail 650B bikes without having to spend a fortune on custom work. The Rawland Nordavinden retails at $725 for the frameset (available from Rawland Cycles directly). While I cannot vouch for the other sizes, I suspect the 650B Nordavinden is a bike that many would appreciate for road-to-trail riding.

Many thanks to Rawland Cycles for loaning out the demo bike, and thanks to the Ride Studio Cafe for putting it together.
More pictures here.
Labels: bicycle reviews Rawland test rides trails unpaved