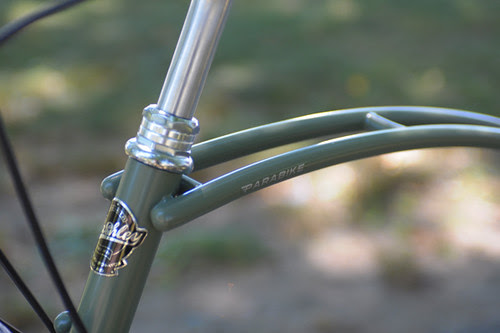 When I saw the Pashley Parabike and Penny at Interbike last year, I was not sure what to make of them. "What are they for and how do they ride?" were my questions. This summer Pashley sent a pair to Harris Cyclery for me to try, and I still struggle to find the words to describe them. One thing is certain: These bikes have little in common with the Roadster and Princess models the brand is known for. I will write about each separately (Penny review now posted here). 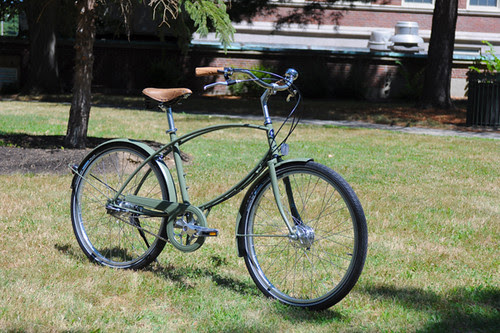 In a sense the Pashley Parabike is a replica of the WWII-era BSA Parabike, also known as the Airborne. But unlike Pashley's remake, the original Parabike was a folder. Here is one I was lucky enough to see in person - hinged and cleverly constructed, albeit monstrously heavy. Paratroopers would jump out of planes with the bikes strapped to their backs, then re-assemble them once on the ground and ride away. They must have been very strong, those fellows. 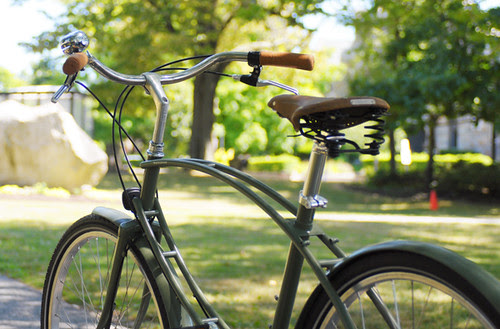 I'll be honest here: The fact that Pashley copied the look and even the military colour scheme of the Airborne but not the folding functionality, biased me against the new Parabike at the start. I suspected it was mostly decorative and intended for military paraphernalia enthusiasts. But as the bike went into distribution I started hearing positive things about it, and so I tried to keep an open mind. 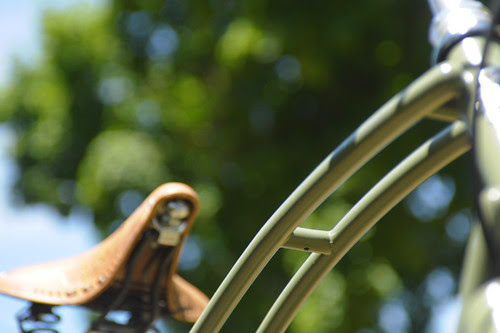 If I let go of my "but it doesn't fold like the original!" grudge, I have to admit the construction is interesting. Pashley calls this a "duplex-tube" frame. In place of the top tube and down tube are sets of twin stays, like on a mixte. The frame construction, from what I can tell, is very similar if not identical, to the Tube Rider and the (no longer produced?) Paramount models, save for the colour scheme. 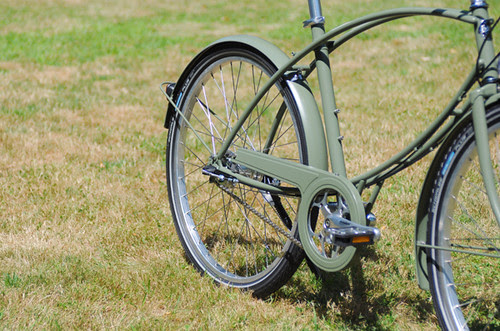 The upper and lower sets of stays curve away from each other, giving the frame a balloon-like appearance. The whole thing is brazed cro-moly steel. 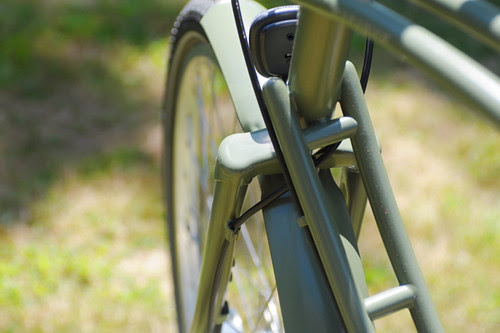 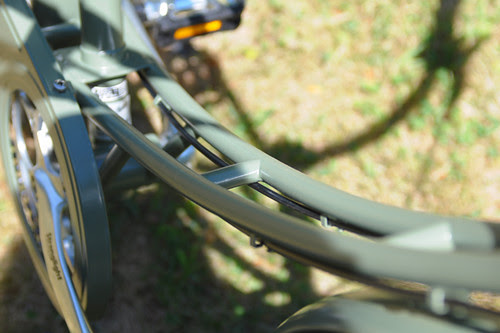 There are little bridges, connectors and braze-ons everywhere, arranged in a way that manages to not make the frame look busy. 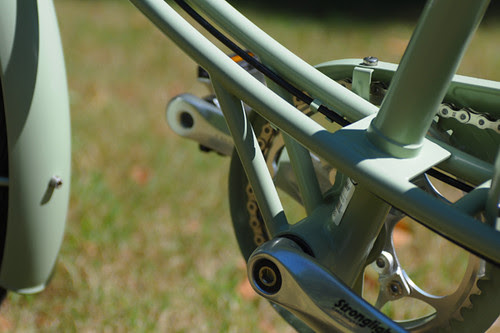 The construction around the bottom bracket is interesting and complicated. 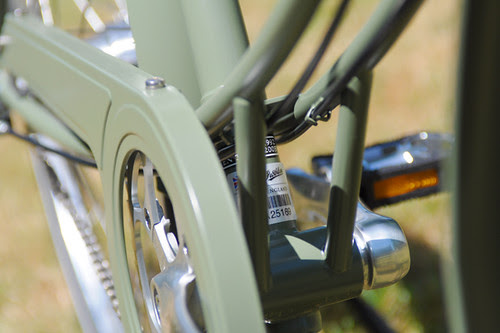 I am guessing the purpose is to provide extra support for the lower set of stays. 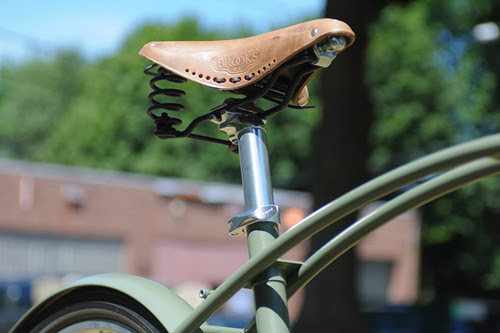 The seatpost is quick release. The aged Brooks B67 is the stock saddle. There are fenders and braze-ons for a rear rack, though no rack is included. 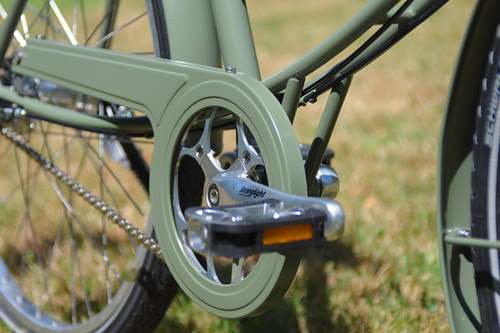 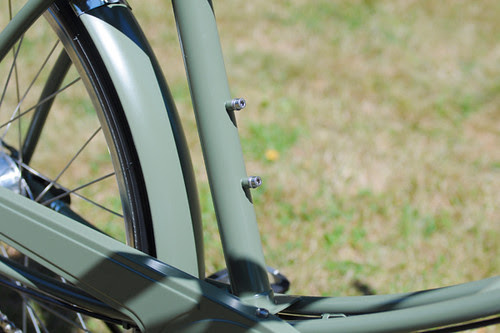 Braze-ons for one water bottle cage. 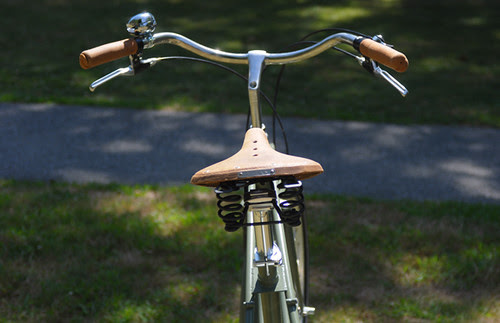 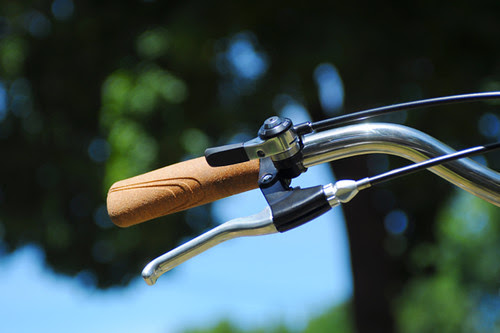 Faux cork grips, hub brakes, Sturmey-Archer 5-speed hub. I don't have a good close-up picture of this, but the frame has horizontal dropouts with a derailleur hanger. 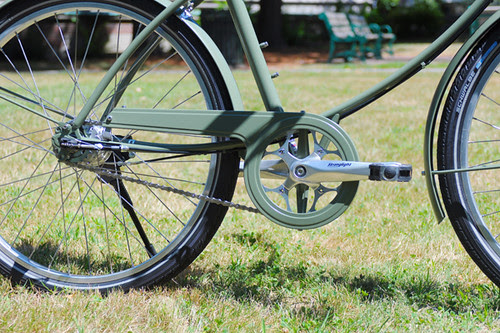 The Parabike is one size only, described as 19". The wheels are 26" with 1.75" Schwalbe Marathon tires. Basic Stronglight crankset with platform pedals. No toe overlap with my Eur 38 sized shoes. 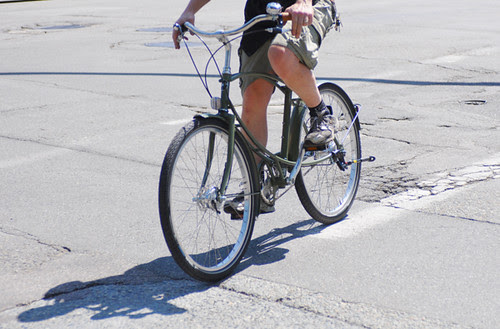 I test rode the Parabike over the course of several miles, and mechanic Jim (pictured here) rode it briefly as well. We agreed it is a cool bike, and we agreed that it's hard to describe. But let me try. Two main impressions stuck with me. One is the excellent ride quality over bumps - by far cushier than the Pashley Princess I used to own. Not that the Princess was harsh; it just wasn't impressively cushy compared to, say, Dutch bikes. The Parabike, on the other hand, felt like butter over potholes. While its tires are a bit wider, I don't think that is enough to account for the different feel. It could it be the springiness of the "duplex tubes." The other impression I was left with was that of maneuverability and zippiness. The handling is all together un-roadsterlike, with greater agility and what I think is a lower center of gravity. The bottom bracket is lower, the rider does not sit up as high, and overall the bike comes across as being rather compact. Of the bicycles I've tried so far, the Parabike rides most similarly to the city bikes with mountain bike heritage group. However, it is a more compact and lighter-weight bike. 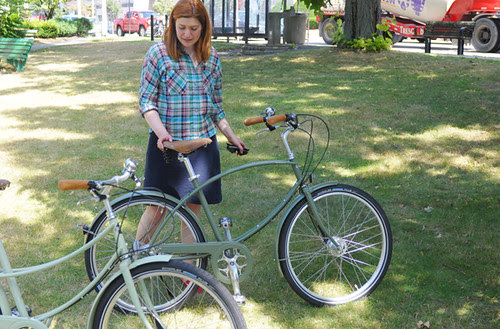 Stepping over the Parabike in a skirt wasn't elegant, but doable. With true diamond frames I tend to be clumsy in this regard, but the curve here makes it a bit easier to lean and step over without having to swing my leg over the back. The fit of the 19" frame felt pretty much ideal for me, though on my own bike I would lower the handlebars.

The main problem I see with the Pashley Parabike is its identity. I like how the bike rides, but I am still not sure what it is for. I think the handling and durability (hub brakes and gears, tough powdercoat) would make it a great transportation bike - including in winter climates and seaside locations. But for a transportation bike, it is missing the rather crucial lights and racks. Although eyelets for a rear rack are provided, it will be difficult to find a suitable model for a bike so unique-looking - a topic I've covered before. I wonder whether Pashley has plans to design a rack specifically for the Parabike, or at least to source one that looks appropriate. An option with dynamo lighting would also be welcome. Of course if the bike is intended mainly for recreation, these practical considerations are less important. But then the hub brakes and fenders and chainguard seem overkill to me - I'd be tempted to strip it down, lighten it up, and ride it on trails. 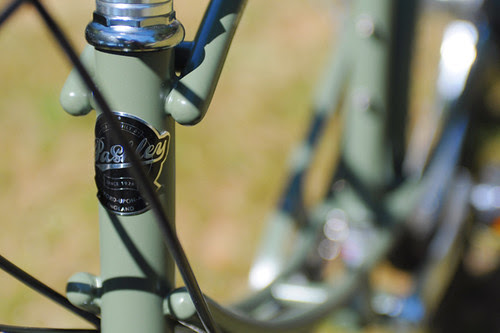 Finally, to return to the Parabike's historical reference: Admittedly, I have not actually ridden an original BSA Airborne Parabike. But there is nothing about Pashley's remake that reminds me of a vintage bike other than the look. The ride quality feels distinctly modern - 90s mountain-bikey, in a good sort of way. It is a neat bike that is fun to ride, and the visual/historical aspect adds a layer to it that I don't quite know what to do with or where to fit into this write-up. It's as if the two things are entirely separate.

Pashley bikes are hand-built in Stratford-upon-Avon, England. The Parabike is available in "ash green" (shown here) or "dusk blue" - a dusty indigo. Current price is $1,195. Both the Parabike and Penny demo bikes are available for test rides at Harris Cyclery in West Newton, MA. A separate write-up about the Penny is forthcoming.
Labels: bicycle reviews Pashley test rides