The Bikes of D2R2 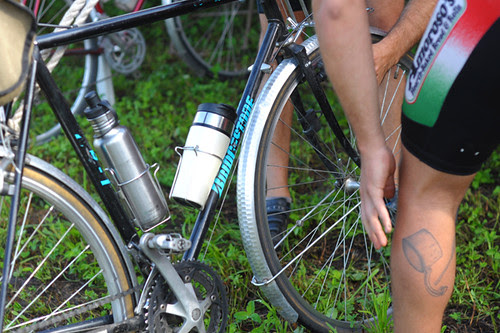 "This is just... ridiculous," I finally managed to say, looking around in a daze. Laughter. "Didn't you know this is the biggest bike-show ever?" No, I did not!

And I thought I was well-informed about the D2R2 before finally taking part this year. It is a "dirt road randonee" with lots of climbing. It offers glorious views of rural Massachusetts and Vermont. And cyclists travel from all over the Northeast to ride it. But knowing this did not prepare me for the bike festival that unfolded before my eyes. I had brought my camera for the scenery, but before the ride even began I was running around photographing bicycles. 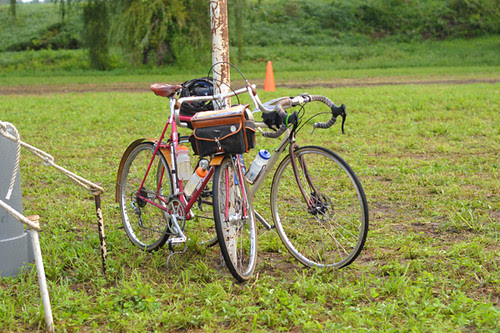 So what bike does one bring to a 70-180 km ride that is infamously hilly and takes place mostly off-road? Wide tires, responsive handling and low gears were the general consensus. Getting more specific, most of the bikes present fit into several distinct categories. 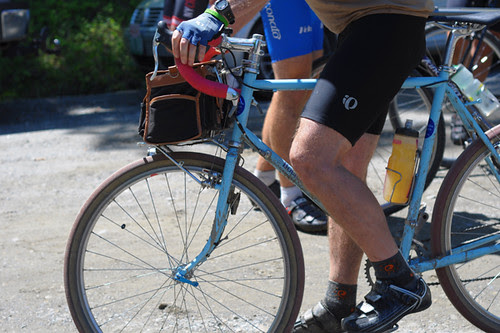 To my amazement, classic steel bikes with wide tires, front racks and French-style handlebar bags were extremely popular. Not that I am not pleased to see that; I am just genuinely surprised that so many of them even exist on the East Coast. 650B wheels were rampant, as were the 42mm Grand Bois Hetre tires. 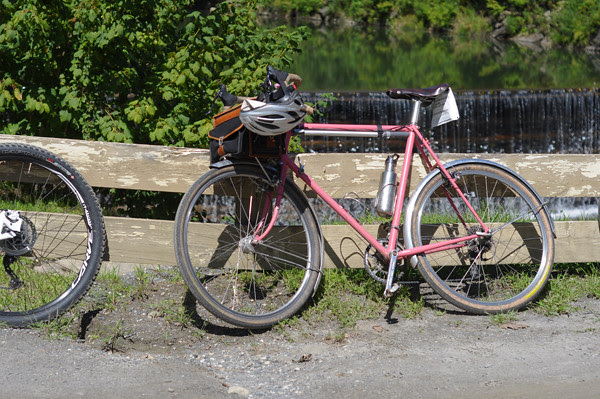 There were quite a few low trail bicycles, both custom and production, including those by Boulder, Rawland, Weigle and Matchak Cycles. 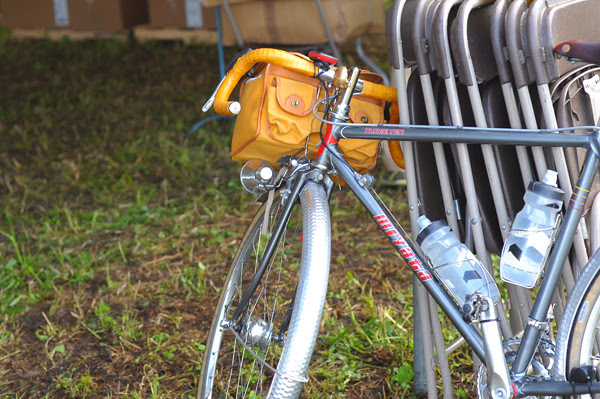 There were also many vintage refurbishments and 650B conversions - some frames with aftermarket braze-ons, canti bosses and paint jobs, and others unaltered. 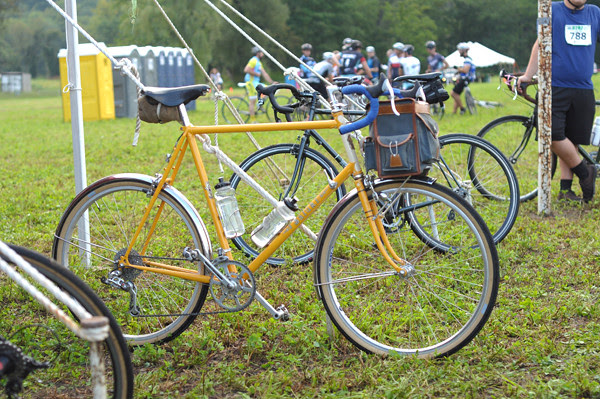 Current produciton road-to-trail bikes with standard front-end geometry were also well represented - both with 650B and 700C wheels - in particular the early Rivendell models. 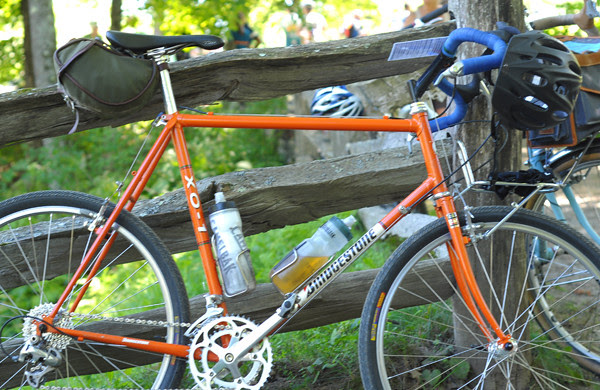 And of course there were Bridgestones. 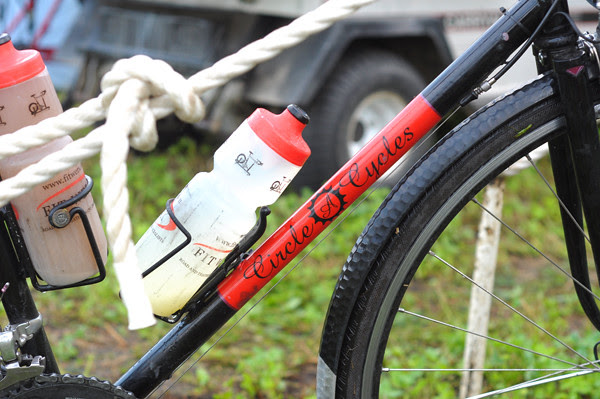 While mass produced bikes in this category were present as well, it seemed to me that the custom, small-batch production, and vintage bikes outnumbered them. Many local custom builders were represented, including Circle A, ANT, Sketchy, Igleheart and Wojcik. 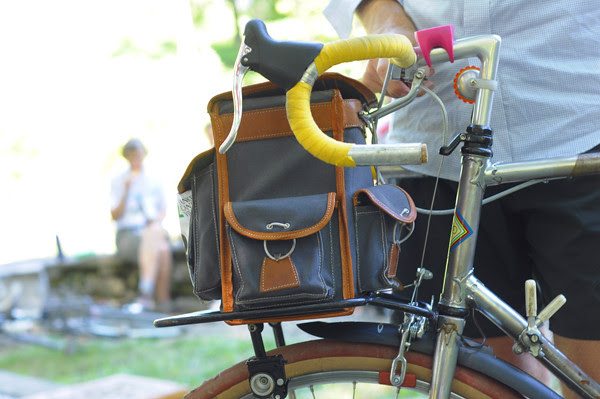 Whether modern or classic in style, handlebar bags seemed to be more popular than saddle bags, regardless of a bike's front-end geometry. I am guessing this is because a handlebar bag makes it easier to retrieve items without stopping, while providing a built-in cue-sheet holder. 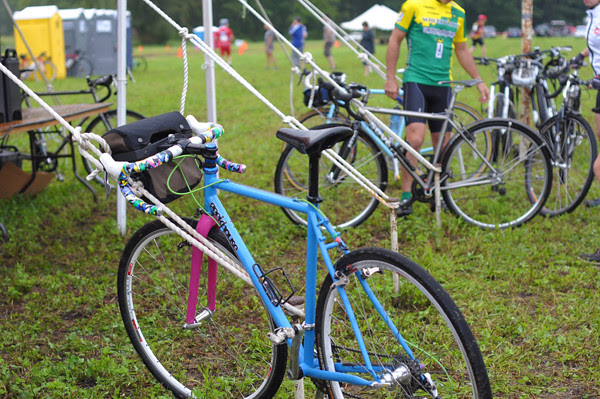 In equal measure to the fat tire classics group, the other huge category were cyclocross bikes. Their performance-oriented geometry, relatively light weight and clearance for wide tires make them good candidates for riding dirt roads. 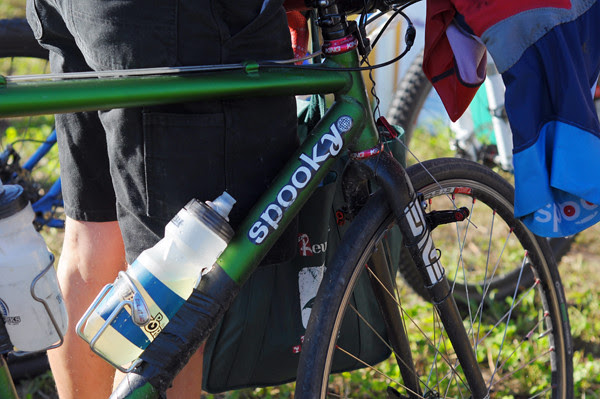 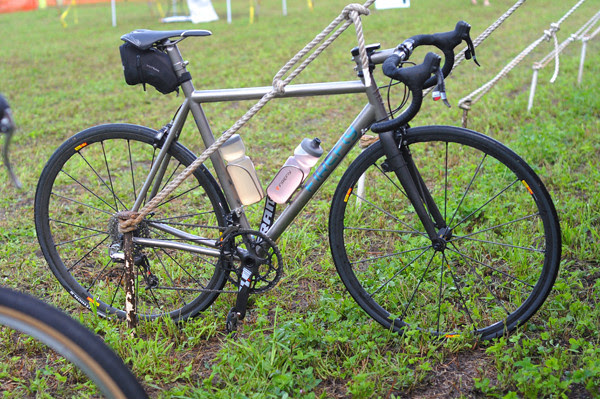 I have never seen so much titanium at one event before, although steel and carbon fiber were also popular. 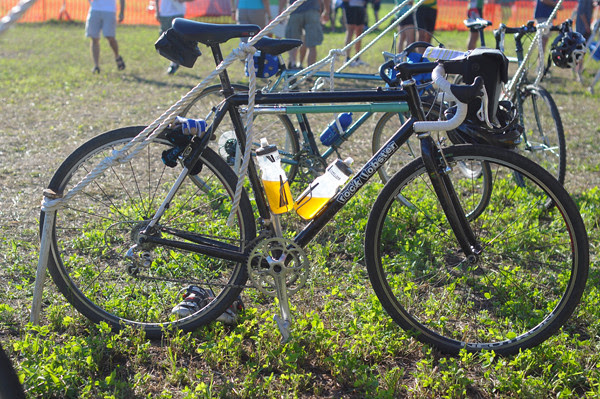 Some West Coast names made an appearance as well, including Rock Lobster and Vanilla. 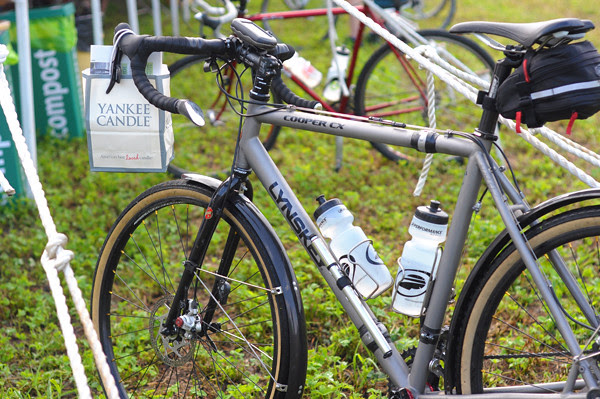 The cross bikes were generally outfitted fairly minimally, with only a small bag on the handlebars or behind the saddle. There were some groups and teams present who treated the event semi-competitively and tried to make their bikes as unencumbered with extra weight as possible. 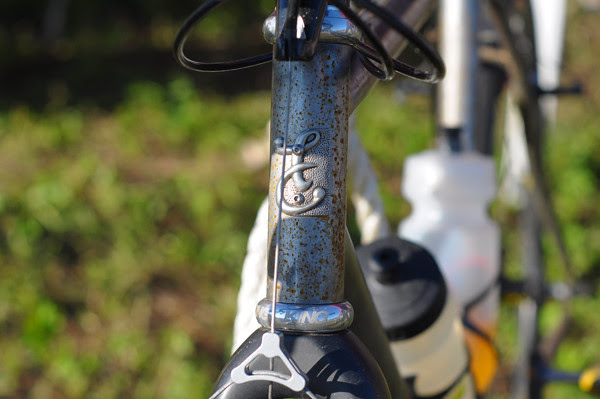 Some even went so far in this regard, as to leave the frames unpainted! 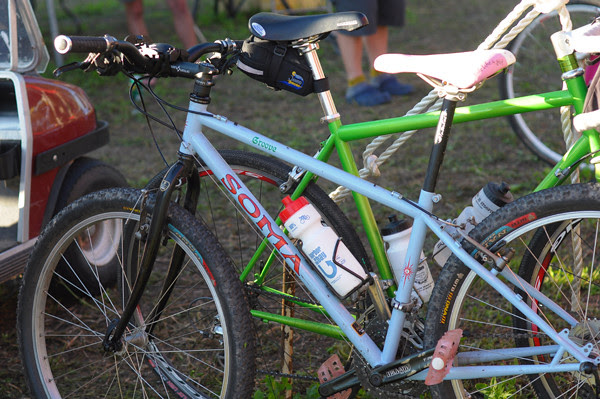 While not as popular as the road-to-trail roadbikes and cross bikes, mountain bikes were a distinct presence. Not the fastest on climbs, and the limited handle bar positions could get tough on the longer routes, but the mountain bikes were great on descents. Terrain was not an issue with their enormous knobby tires. 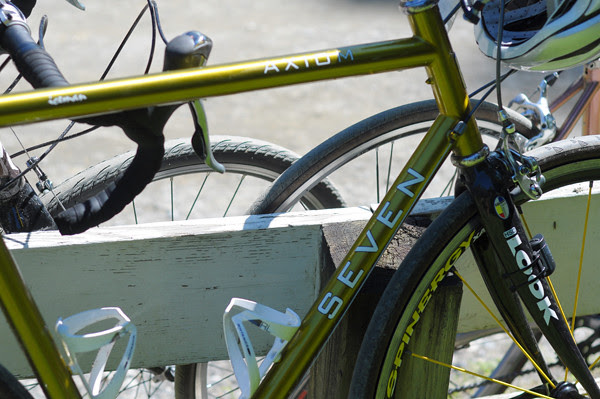 In the opposite camp were those cyclists who feel quite comfortable riding dirt and gravel on standard roadbikes, fitted with the widest tires the frames and fork clearances would allow - usually 28mm. Some believe there is some speed advantage for those who can manage this. But the drawback is that narrower tires tend to get more flats off road, potentially canceling out any lead time. Of those cyclists I spoke to who'd gotten flats (sometimes multiples) during the ride, most were riding tires 32mm or narrower. 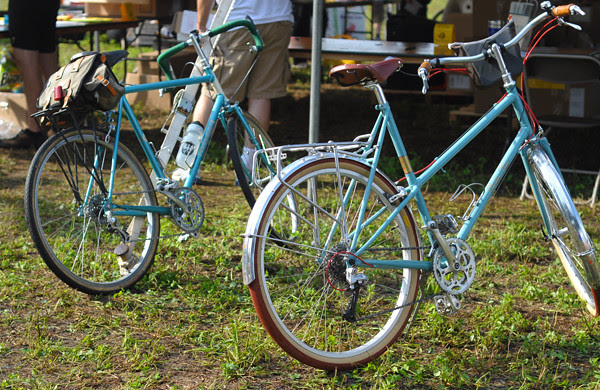 Finally, there was a handful of upright town-and-country types of bikes, including comfort bikes, step-throughs and mixtes. All had wide tires and low gearing and overall their riders looked comfy and happy. While I saw a few walking up hills at several points, this could have been avoided with lower gearing. With the right features, it is quite possible to ride an upright bike comfortably on this type of ride, as long as there is no expectation of keeping up with those on more aggressive machines. 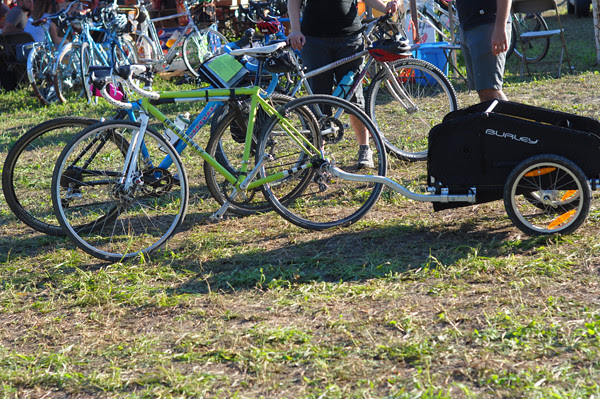 There were a few cyclists hauling trailers with children and pets, which was fun to see, not to mention impressive. Wish I could have captured them in motion. 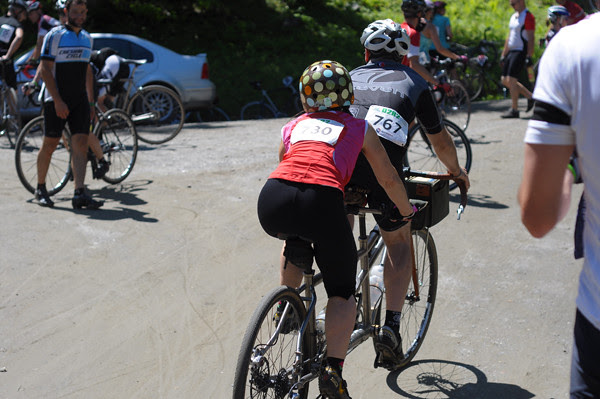 But I was surprised tandems were not popular. I spotted only two: a Seven and a Burley. 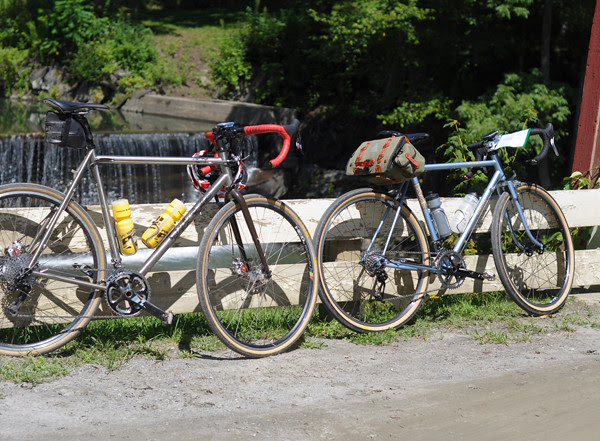 There are many choices for bikes out there for those interested in hilly off-road rides. While the D2R2 seemed to be dominated by custom, vintage, refurbished and otherwise unusual bikes, there are plenty of production models that can meet the requirements as well. Based on my own experience with this ride, I would say aim for wide tires, low gears, and handling that is as responsive as possible without exceeding your comfort zone.
The D2R2 was possibly my favourite ride ever and I will write about it soon. Meanwhile, the full set of bike pictures can be found here.
Labels: bicycle events bicycle industry mountain bike randonneuring trails unpaved