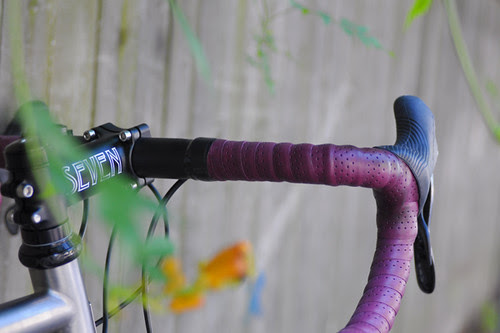 In May 2011 I test rode a titanium roadbike by local manufacturer Seven Cycles. Unexpectedly, this turned into my renting a demo model for the remainder of the summer, culminating in this review of the bike. After much hand-wringing and testing of other bikes, this Spring I got a Seven of my own. Both Seven Cycles and their sister bike shop Ride Studio Cafe sponsor this blog, which afforded me the opportunity to purchase the bike at a manageable price point. My new bike is a Seven Axiom S - their entry level titanium road/race model - fitted with a Campagnolo Chorus group. Other than submitting myself to an extensive bike fit process, asking for no toe overlap, and specifying my preference for a level-ish top tube, I did not get involved in the frame specs. "Just make it the same as the one I test rode, only in my size" was the extent of my input. We also went with the same components as the demo bike I rode last year. On Seven's advice, I bought the bike bundled together with pedals, shoes and fancy computer. The complete bike was handed over to me in ready-to-ride condition. I have not kept track of the milage properly, but I estimate it to be around 1,000 miles at present. The kind of riding I've done on it so far has included solo rides, club rides, some metric centuries, and one overnight imperial century - all mostly road.

It took me a while to write about my bike, and I am still not sure what or how to do it. The problem is that it feels so oddly natural, that it simply disappears from my field of awareness. I feel myself pedaling, but I don't feel the bike. And because I don't feel it, I don't think about it. I don't even look at it much. When I do look at it, I am riding it - so even when I try to conjure up an image of "my Seven" what I am really picturing is the cockpit view of the handlebars, wrapped in purple bar tape. The bike itself is just not there. How can I write about something I don't feel and photograph something I don't look at? It feels forced. And so that's been the dilemma. 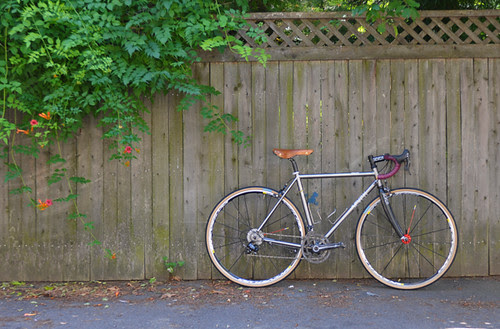 But of course the bike is a tangible object. Titanium frame, carbon fiber fork. I watched the frame being welded. I know the guy who built it up with components. The bike is real. As far as aesthetics, there are certainly those who are crazy about titanium, but I can take it or leave it. I don't hate it - and Seven's frames have some nice design elements that I particularly appreciate, such as the curvy chain stays and super clean welds. But I don't love it like I do brazed and lugged steel. While aesthetically I am neutral, functionally I have come to see benefits. I like the ride quality. I like the durability. I like the light weight. I am okay with feeling "aesthetically neutral" about a material in exchange for these benefits.

As is common practice with titanium frames, I left mine unpainted. There is no need, as titanium does not rust. If the surface gets scratched, I can simply buff the scratches out. Easy, and truly low maintenance. The unfinished frame gives the bike a matte silvery look that contributes to the neutral effect. There is nothing to see here: No colour, no lugs, but no ugly messy welds either. The welds are subtle, delicate-looking puddles at the joints. 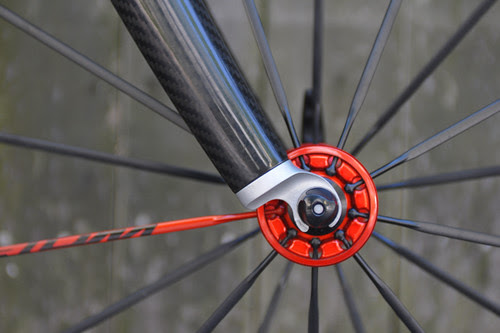 A technically interesting aspect of the bike is Seven's proprietary 5E fork. The curved blades give it a more elegant look than the more typical straight forks, and, some would say, have a positive effect on ride quality. Even more interesting are the adjustable dropouts that allow for these forks to be made in a wide range of rakes (36mm to 58mm) - something that is not commonly done with carbon fiber forks. Among other things, this enables them to make small bikes without toe overlap.

There are different opinions out there about carbon fiber forks, one of them being that they are prone to sudden breakage. This was my own understanding of the situation initially. But over the past year I have read up more on the topic, have talked about it with a number of framebuilders (including steel-loving ones), and have come to the conclusion that it's not as simple as "carbon fiber is more fragile than steel." As far as anecdotal evidence, I personally know many more cyclists who have damaged or destroyed steel forks than I know cyclists who have damaged or destroyed carbon fiber forks. Carbon forks may not be pretty, but I believe the modern high-quality ones are strong and safe. One is not obliged to get a carbon fork with a titanium frame. But last summer I liked the way the Axiom demo bike rode so much, that I did not want to change any part of the equation, so I went with a carbon fork. I do not lose sleep over this. I don't notice it. 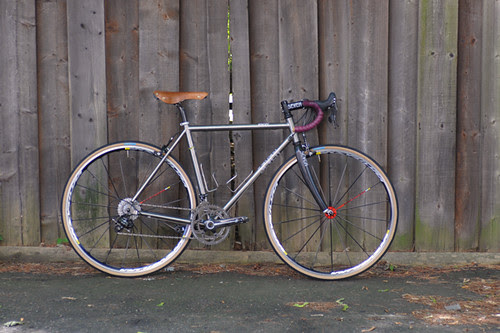 Since I first got the bike in spring, it has undergone only a couple of minor changes. I changed the saddle twice (from Berthoud, to Selle Anatomica, then back to Berthoud), trying to determine which one was more suitable for long rides. I also switched out the original 23mm tires (Michelin Krylion) to 26mm tires (Grand Bois Cerf) - mostly just to experiment, but I think I'll keep them this way for a while. Otherwise, the bike has stayed the same. I have several saddle wedges and bags that I use, depending on the sort of ride I am doing, so it usually has at least a tool bag underneath the saddle. Unlike some other road/racing bikes I've tried, it carries weight in the rear very well - including a large Carradice-type bag full of heavy stuff. I have not tried weight on the handlebars yet. As far as geometry, it is basically a 52cm x 53cm frame with a 2° sloping top tube, mid-trail front end, and a steep seat tube. The frame and fork will fit tires up to 28mm. The drive-train is 50/34t in the front and 12-29t in the rear. I prefer to stay seated and spin when climbing hills, and so far this gearing has allowed that for most of the riding I've done. The Campagnolo ergo levers feel extremely intuitive to use. The Crankbrothers pedals have been easy and problem-free.

As far as limitations, I have noticed only one so far: When doing a 100 mile ride, toward the end I wished the handlebars had roomier "shoulders" behind the brake hoods. I am still not sure what kind of rides I will mostly be doing on this bike, but if I end up consistently riding it long distance I will consider different handlebars. Likewise, I may want lower gearing, should I ever do the kind of climbs that call for it. This bike was not designed for racks, fenders, wide tires, and the like, and so it isn't really meant for touring, transportation, or off-road use. So far it has proven to be more versatile than I expected, but it remains at its best as a light bike for spirited local rides. It is then that the bike is at its least noticeable: It's just me then, flying through thin air. 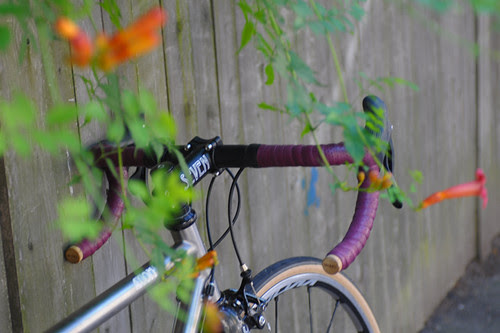 To explain the disappearing bike phenomenon, maybe I need to go back to the day I got it. I showed up for a Sunday morning ride at the Ride Studio Cafe on my old bike, and when I walked in the door someone was pointing toward the back of the store excitedly, mouthing "your bike is here!" I headed that way and saw a small group of people, crouching and leaning over what was presumably my bike. They were discussing the unusual decals (made using a non-standard font) and the leather saddle. Feeling shy, I stepped aside and watched them all watching my bike. By the time the crowd dissipated, it was time for the Sunday ride, and it was somehow just assumed that I would ride the new bike instead of the one I arrived on. In retrospect, it might have been wise to test ride it at least around the block before a 30 mile club ride, but there was no time. I barely had a chance to look at it in its unridden state. We headed out and before I knew it, I was pedaling and panting and braking and shifting in a small group of other riders, the wind in my face. Only later, as I rode the additional 10 miles home at an easier pace, did the reality that I was taking my new bike home set in. How did it feel? I really could not say, other than that I did not feel it at all. And that set the tone for our relationship: The bike absented itself politely from my cycling experience. I can tell you whether I ride fast or slow, how many miles, how hilly it is, how tired I am in the end, what sort of things I see around me - but I don't know what to say about the bike itself.

In my review of the demo model last year, I was excited about how fast the Seven rode. Since then, I have ridden other road/racing bikes. They are fast as a category, and the Seven Axiom is just one of many excellent fast bikes out there. What makes this particular bike well-suited for me is the intuitive, weightless, painless feel of it in addition to the speed itself. I do not feel the rough roads. I get less fatigued after riding than I do on other bikes. The fit feels perfectly natural. The components are seamlessly integrated. It really is as if the bike isn't there. When asked to describe it, I draw a blank and what comes to mind are the purple handlebars I see while I'm riding. Not very informative, though in a way maybe it is.
Labels: bicycle reviews Seven titanium