Long Commutes in the Rain 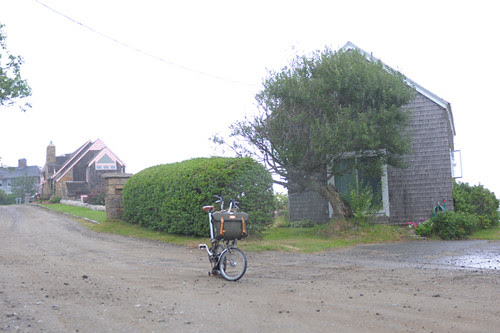 Most transportation cyclists eventually get comfortable with riding in the rain, and for me this was never particularly a problem. In the beginning, my commutes through the city were short and I mainly remember struggling with poor visibility and chaotic traffic, before getting used to it all. But as my travel radius increased, so did my exposure to rain. Some things began to matter that did not matter as much before, and I gradually made adjustments. 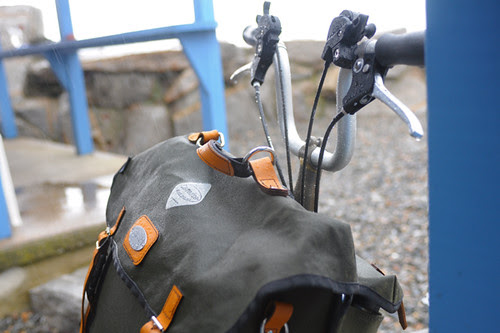 As far as the bike, the big thing for me was waterproofing. I carry a laptop always when cycling for transportation, a DSLR camera much of the time, and also hand-written documents. These items absolutely cannot get wet. While there is now a wealth of attractive new bicycle bags on the market, many of them are not designed to resist water beyond a short ride. For long commutes, I suggest using a touring-grade bag or one that is specifically described as waterproof. The Carradice I've been using on my Brompton for the past 5 months has been pretty good so far (for as long as 50 miles in continuous rain in Ireland - with both my laptop and camera inside), as was the Po Campo pannier I used on my full-sized bikes before that. Ortlieb bags are probably an even safer bet. Just in case, I keep a plastic bag inside for emergencies, and I always store water-sensitive items in internal compartments. 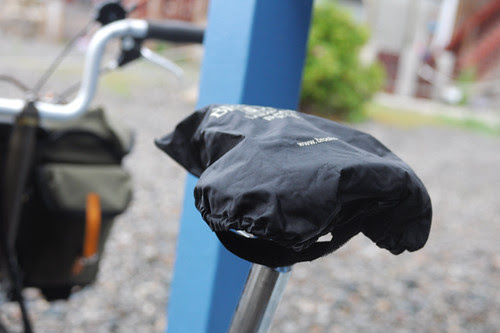 An issue for those who use leather saddles, is that these can get soggy (and, consequently, deformed) after long rides in the rain. A good saddle cover helps, and the stock one from from Brooks shown here is actually not the best example. Normally I use a thick gray one from Rivendell that fits tightly all around the saddle. It is deep, too, which protects the underside of the saddle as well. I am sure there are others that do a good job. Alternatively, there are specially treated leather saddles - such as Selle Anatomica - that claim to be waterproof. 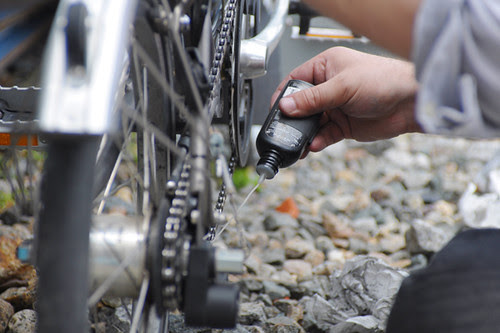 Finally, long exposure to rain might call for additional bike maintenance. On a bicycle without a chaincase, lubing the chain is probably a good idea. And even if you're not into cleaning your bike, the debris that gathers around the brake calipers and derailleur is worth wiping off to keep everything functioning smoothly. The need for this kind of maintenance after long rides in a downpour certainly makes a good argument for internally geared hubs, enclosed hub brakes and a full chaincase. However, bikes with those features may not be ideal for hilly long distance commutes. 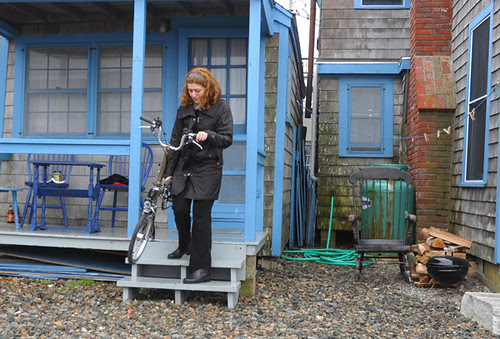 As far as the cyclist, clothing choices get trickier - especially if you want to ride in regular clothes and don't have the opportunity to change upon arrival. A truly waterproof outer layer is essential. But equally important is breathability, since you are exerting yourself more than you would on a shorter ride. When I started riding longer distances I discovered that my usual raincoat was neither entirely waterproof, nor very breathable. Eventually I found one that worked well - made of light, technical fabric with lots of vents and a removable hood. Rain capes may be another option, with some breathable, cinchable ones from Iva Jean and Cleverhoods recently introduced. Just as crucial as outerwear is waterproof footwear: Shoes that are fine on short rides can get soggy after 10+ miles pedaling in the rain, and you probably don't want to sit around with wet feet all day.

Of course, all the general tips for riding in the rain still apply: Lights, fenders, extra caution. On an upright bike, I don't feel like the rain is hitting me in the face as hard as it does on a roadbike, which makes things more pleasant. Once outside the city, I generally find it fairly peaceful and low-stress. Mixing ideas from transportation cycling and touring has been helpful for me and that's what I would suggest to others with long rainy commutes. Find a setup that works for you, and enjoy not being stuck in suburban rain-day traffic!
Labels: Brompton rain transport transportation options