When Spouses Worry About Cyclists 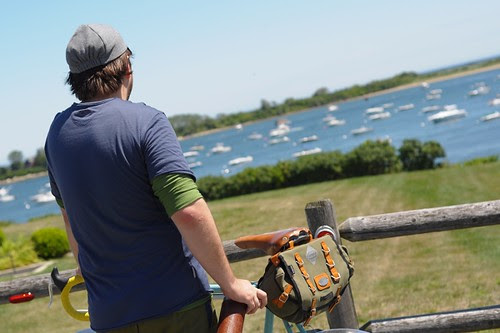 I get a fair number of questions from readers - and, interestingly, only heterosexual men so far - asking for advice on how to deal with spouses worrying about them cycling. Some describe situations where wives implore them not to go on club rides, or are against them riding for transportation. Other stories are less dramatic, but nonetheless involve an overabundance of spousal distress that in turn makes the cyclist feel guilty. Doesn't my husband worry, they ask? What do I say to ease his mind?

Of course my situation is different, in that my husband is himself a cyclist. His understanding of what riding a bicycle entails is based on reality and not on the negative portrayals of it in the media. Still he does worry about me at times, especially when I go off with riders whose speed and skills far exceed my own. He deals with his concerns by asking me questions and trying to gauge how prepared I am for the ride and how well I myself understand the risks. And I admit that I worry about him too. While he rides considerably fewer miles than I do, I would describe him as more of a risk-taker. If he is late coming home from work, I worry.

It could be that this is the essence of spousal worry: Perceptions of risk. Do wives tend to perceive their husbands as risk-takers more so than the other way around? It would explain why I never hear from women complaining that their husbands worry too much. It could also be that, for whatever reason, female cyclists are more likely to have spouses who also ride bikes.

Either way, unfortunately I am not certain what to suggest here. You could reason with your spouse using statistics, descriptions of how safe your route is and how careful you are - but when fears are irrational this does not always work. Attempts to get your spouse into cycling could do the trick, but could also backfire if they try it and find it frightening. Showing them entertaining materials (films, books, pictures, blogs?) that depict cycling as safe and fun could be a way to go, but how exactly this could be implemented is not clear to me.

While we all want to be free to do as we like, we also don't want to drive our loved ones sick with concern for our safety. It would be good to hear from readers who've gone through this type of situation and resolved it successfully.
Labels: Co-Habitant roadcycling safety traffic transportation options