One of my most vivid memories from Northern Ireland is standing outside Chris Sharp's house, staring at a dozen Mercian bicycles lined up on the front lawn. The rainbow of their frames stood out in vivid contrast to the wall of dark pine trees behind and the gray skies overhead.

Rain was coming down - slowly at first, then in earnest. Fog set in. As water dripped from the frames and a milky mist began to surround us, it looked as if someone had spilled tubes of paint onto the lawn. What a sight.

Since the time he was old enough to save up for his first roadbike, Chris Sharp has been accumulating Mercians. There is just something about them he enjoys and feels is special. A familiar story!

Several decades later, his Mercian collection includes road, touring and track bikes, a mixte, and several time trial machines, as well as catalogues and paraphernalia from the early days of the Mercian Cycles shop.

The magnificent spread I saw on the lawn was not his entire collection; there is more in storage and elsewhere. But it was nonetheless stunning and provided beautiful examples of the legendary machines throughout the years.

Chris Sharp's bikes do not get babied. They see rain, they are taken to events, they get ridden by him and others. Which did I want to ride? How about the earliest example, a machine from the 1940s? Never mind the downpour and the fog.

Considering that Mercian Cycles set up shop in 1946, seeing this early machine was rather exciting. Chris's brother Keith was curious to try it, though I was reluctant - imagine crashing something like this!

Though the exact year of the bicycle's production is unknown, most likely it is 1947. The paint and components are not original; the bike underwent several cosmetic changes in the course of its existence. The frame itself however has remained unaltered. Chris bought the bicycle in Derby, England - from Mercian Cycles directly when the shop was under its previous ownership. The current restoration was done by Mercian, and the build was done by Chris using vintage English components.

It is a shame that the original paint and decals could not be preserved. The original head badge would have looked like this.

But the original lugwork can still be admired.

I love the older fork crowns as well.

Though cosmetically battered over the years, the frame itself had remained in good condition and the restored bike is entirely ridable.

Chris had it set up as a fixed gear for himself, but had put a freewheel on it to make it easier for others to test ride. The size is just about perfect for the Sharp brothers.

Keith Sharp is a bicycle racer and rides mostly modern machines, though appreciates his brother's vintage collection. He had never ridden this particular Mercian before, but loved it when he tried it. "The ride quality! It is very comfortable, you really must ride it!" I confess that it took a bit of convincing to get me on this bike. It was too large for me and I was unsure that I'd be able to use the brake levers effectively. Also, it was raining! But finally, my curiosity to learn what one of the earliest Mercians ever made felt like on the road won over and I tried it. 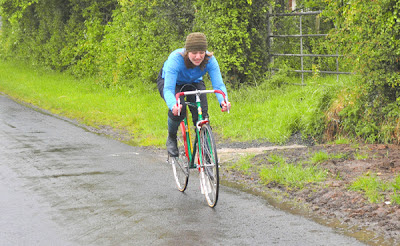 Very glad I did - what a bicycle. Yes, there is something about the ride quality. A steady, comfortable and almost effortless ride, gliding over rough road surfaces and yearning for uphill stretches. The bike was surprisingly easy to maneuver despite being too large for me. Once I started riding it, I wanted to keep going. It also felt oddly similar to my own Mercian back home. It makes no sense to believe that there is a distinct ride quality associated with Mercians that spans decades of production, despite the generational change of builders and the use of different tubing and geometry. And yet the Mercian owners and collectors I've spoken to quietly believe this, while conceding that its unlikelihood. I do not plan to collect Mercian bicycles, but I enjoy learning about their history and interacting with their enthusiastic owners. It was a treat to ride a Mercian of 1940s vintage - one of the earliest made. More pictures here.
Labels: bike friends Ireland mercian vintage