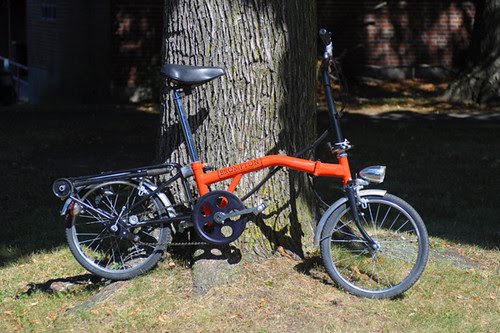 Brompton folding bikes have remained virtually unchanged since they entered into production in the late 1980s. But before that happened, there was a small pilot run and the machines from this early batch were just a tad different. Only several hundred of these were made. Two of those recently ended up passing through Harris Cyclery on their way to the Brompton museum. And one of those I had the opportunity to photograph and ride. Pictured here is the 358th Brompton ever produced. Red and black 3-speed with upright handlebars, dynamo lighting, rear rack and fenders. 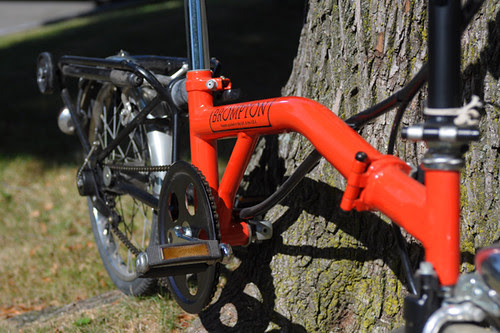 The most striking difference between the Brompton we know today and this early model is the "humpback" frame construction. As the Brompton history page explains it, "this feature had come about for the simple reason that standard pipe-bending tools could not produce the gentle radius desired. Change would only come with expensive retooling." By the time the bikes went into full production, the capital investment required for this had been secured and the bend of the main tube became more elegant. 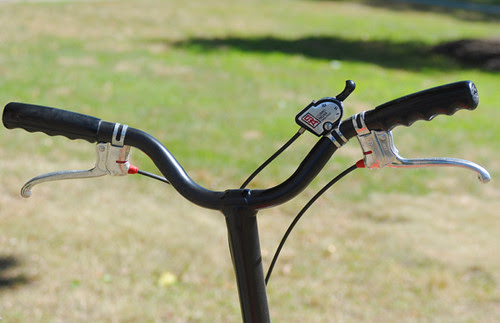 Other differences are more subtle. For instance, the handlebars are welded(?) to the stem. 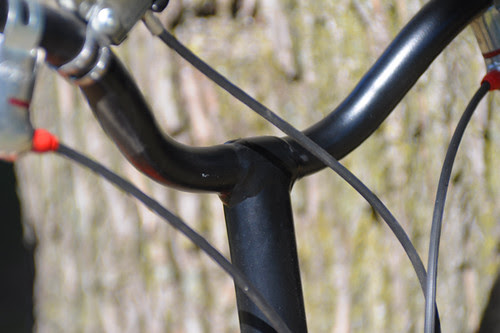 Here is a close-up. I take it this means the early handlebars were steel. 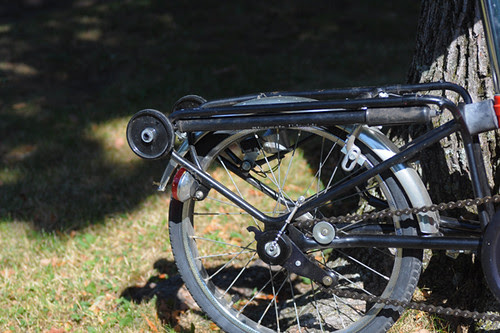 Likewise, the rear carrier is welded to the rear triangle. 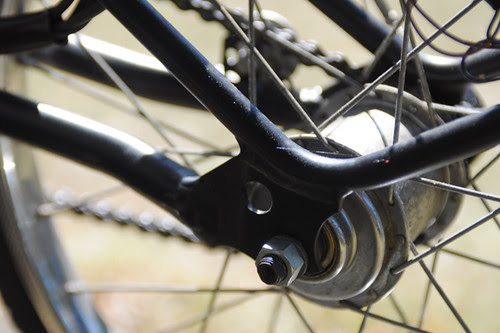 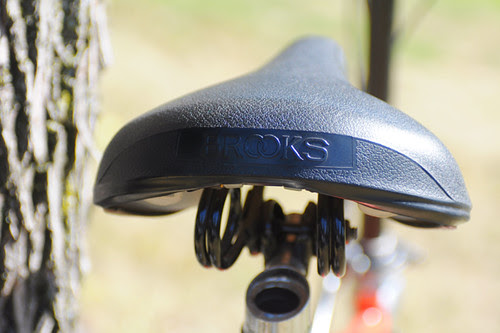 The bike comes with a wide, sprung plastic Brooks saddle. 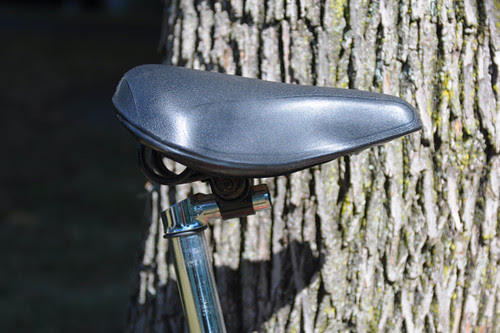 Fitted onto a set-forward seatpost. 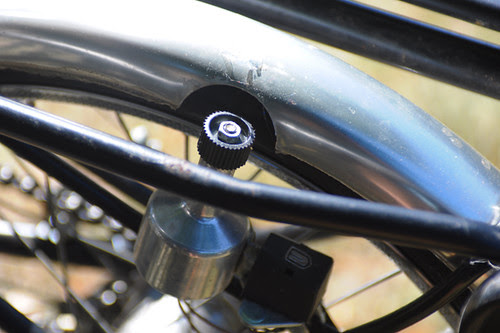 The dynamo lighting functions via a bottle generator on the rear wheel. The rear fender has a special cut-out to accommodate it. 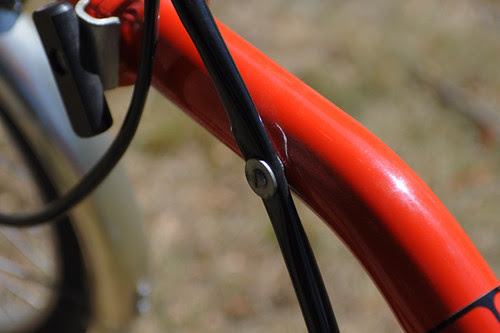 The cable routing is interesting. 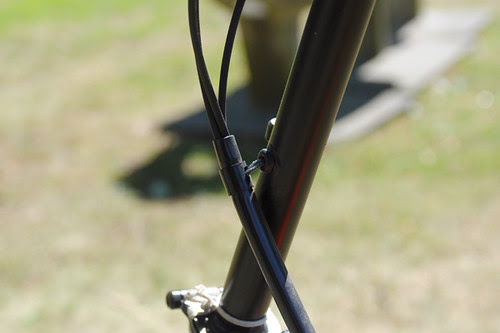 If I understand this correctly, it appears that several cables are gathered into the same housing and secured to the frame and stem at various points to facilitate the fold? 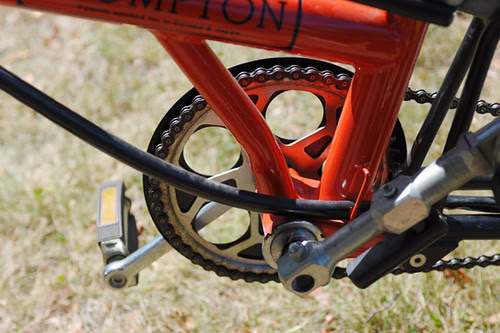 Here it is passing over the bottom bracket. 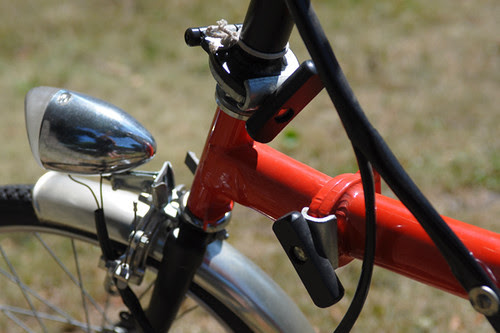 The fold itself is mostly identical. Same process, with similar bolts on the frame and stem as on the current production model. 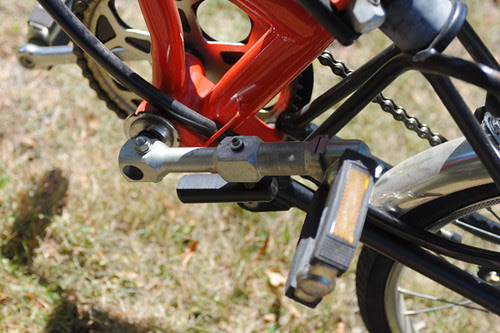 Only the pedal fold is different. 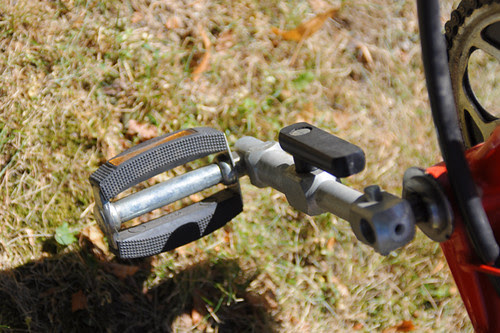 Levers are involved; it is more complicated and bulky than the current snap-fold. 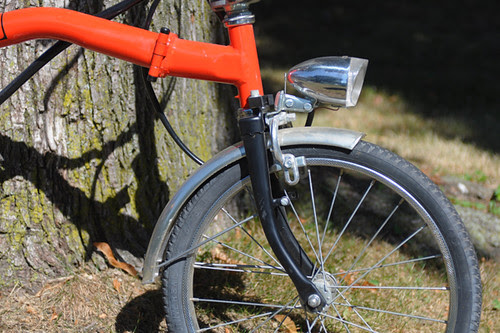 Finally, it looks to me as if the frame construction itself is different in places - the way the tubes are joined. The other differences are mainly in the components. The retro lights. The fender stay attachment. There is no front block system, and instead some of the early models were fitted with front racks. Brompton experts will no doubt notice a myriad of other differences that I haven't picked up on. As far as weight, the bicycle felt a bit heavier to pick up than current production models built up with equivalent specs, but not by much. 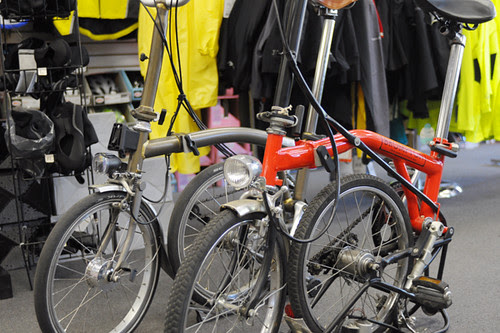 I rode the older bicycle carefully and briefly - not wanting to ruin its pristine condition (it had barely been ridden by the previous owner). The first thing I noticed was that there was much less room in the "cockpit" compared to my own Brompton; it felt a bit cramped. The difference seemed too great to be explained by the older bike's saddle being more forward; it seemed that the frame itself was shorter. Later I asked about this at Harris and was told it was indeed the case. Unfortunately I had no time to measure the two bikes, but it appears that when they got rid of the bend in the main tube, they also lengthened it. 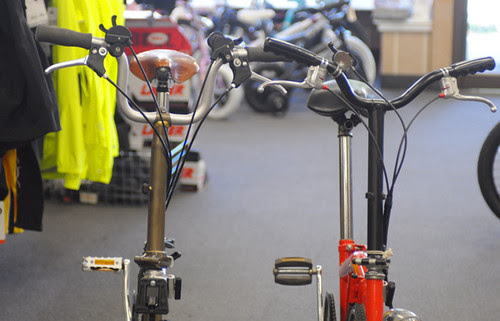 However, the front-end handling of the older bike felt very similar, if not identical to modern Bromptons. Overall, riding it felt like riding an older and more upright version of the same bike. Reading Brompton's history and hearing about it firsthand from those in the know, it is striking how little the bicycle has been tweaked since its initial development. Aside from straightening out the bend after the pilot production run, they've mostly just worked on getting the weight down a bit and improving the components. The fold and the handling have remained the same. 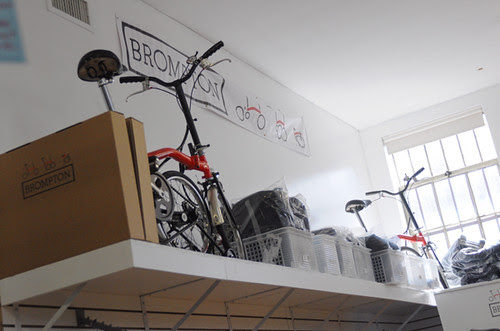 For locals who'd like to see the pair of early Bromptons, they will remain on temporary display at Harris Cyclery until September. Many thanks for the opportunity to photograph and ride the #358! You can view more close-ups of it here, and Elton Pope-Lance has photographed both bicycles here.
Labels: Brompton local bike shops test rides vintage