Not a Typical DL-1 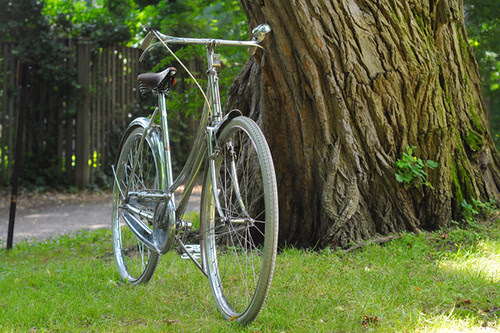 Over the years I've been fortunate enough to befriend some very serious bicycle collectors. And I understand enough about how they operate to know it is unlikely that I will ever be one of them. I have a strong aversion to online auctions. I am unwilling to spend my weekends traveling across state lines to visit bike swaps and barn sales. Space is an issue. And most importantly, my tastes in bikes are too varied. But if there is one bicycle in which my interest has remained consistent, it is the Raleigh DL-1 Lady's Tourist.

I acquired my first one in 2009 - a run of the mill 1973 model in so-so condition - and "frankenbiked" it into a working city steed which I still ride today. The second Lady's Tourist was practically forced into my hands half a year later. The 1930s model was covered in surface rust and I did not want it. Where would I keep the filthy thing? But the gentleman who offered it insisted I was the rightful owner: "Take it. It is completely intact and that rust can be removed. You won't regret it." He was correct. It is a historically significant treasure that I look forward to carefully restoring some day. 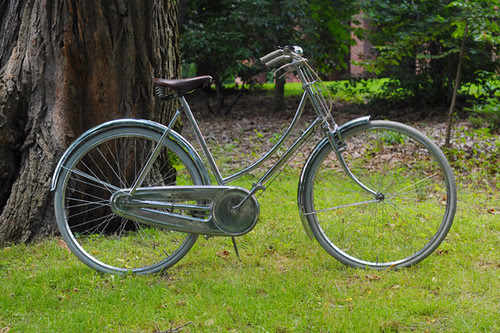 At that point I knew that I would have a collection of DL-1s in the future; it was just a matter of time and luck. I did not intend to buy up random Raleigh Tourists; I was interested in specific things. An all-original model from the 1940s-50s was one of them. A pre-1930s model was another. And then there was the one that seemed least likely to surface: the chrome Tourist. But two years later, surface it did - in the hands of a collector in Germany, who did not want it for himself and promptly offered it to me. I was not prepared, but a chance like this does not come along often and after a feverish correspondence the bike was mine. The machine arrived completely disassembled and packed into a standard sized box in the most expert manner I've ever seen. It took us some time to put it back together, but finally we managed and here it is: a chrome Raleigh DL-1 Lady's Tourist.

The proportions of the 22" frame are identical to my 1973 bike. The hub is stamped 1980. "Raleigh Nottingham" headbadge. Most of the parts are original. The amount of wear suggests the previous owner rode it for years on a regular basis, but did not store it outdoors. 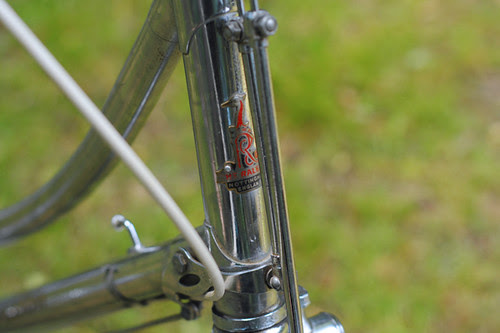 Aside from their eye-catching finish, what makes chrome DL-1s interesting is that historically they are somewhat of an enigma. On several occasions, Raleigh released limited edition All-Chrome versions of their roadster models. Originally these were made only for dealers as demos or display models. In later decades chromed editions began appearing in catalogues. In theory it is possible to find a chromed Raleigh roadster from any number of decades, made for any number of markets. The best known of these today is the Boss Bike - a balloon tire chromed Superbe Roadster produced for Raleigh's African market in the 1970s. There was also a chromed DL-1 produced for the German market through the late 1970s and early '80s. My bike is an example of the latter. 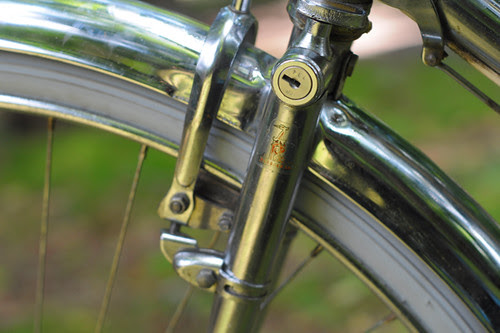 One very cool thing about the bike is the locking fork. Unfortunately, the key is missing. I will look into whether it's possible to get a duplicate made. 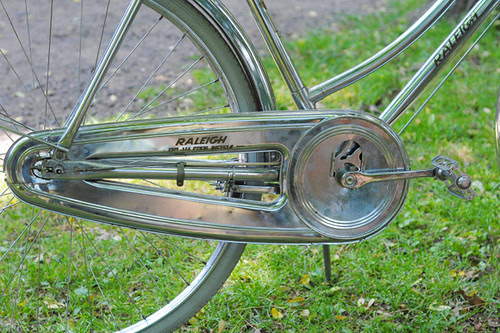 Also missing is the observation insert on the chaincase. The rear of the chaincase is slightly crumpled, but we are working on fixing that. The bike needs new cotters, and the headset could use repacking or replacing. Otherwise there is no damage. 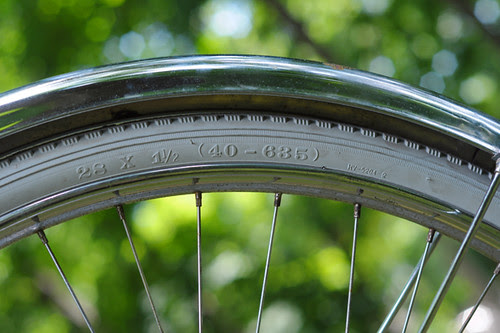 A couple of things are not original, such as these newer tires (which ride great). The headlight and bottle generator are missing, though I do have the original tail light. 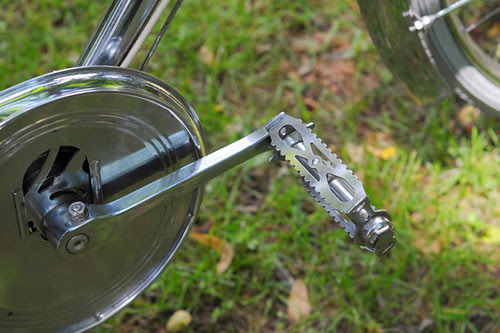 I initially thought these pedals were not original, but have since seen similar ones on other chromed Raleighs. The seller sent me these along with a set of the more typical Raleigh platform rubber pedals, but these are nicer and less than half the weight. 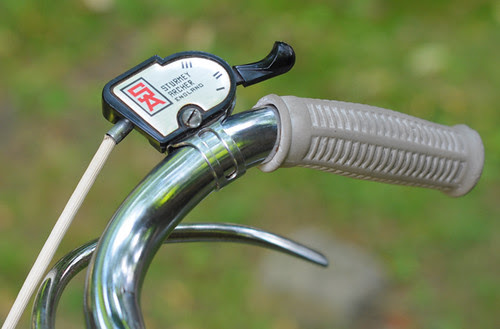 It looks like the grips were replaced by the previous owner after the originals wore out. The fit isn't quite right, but they feel and look fine, so I will keep them until I can find a better alternative. Late 1970s - early '80s Sturmey Archer trigger shifter. 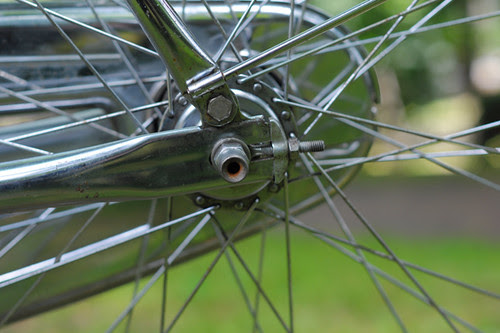 The bolted rear triangle and fork ends are identical in design to my standard 1973 DL-1. 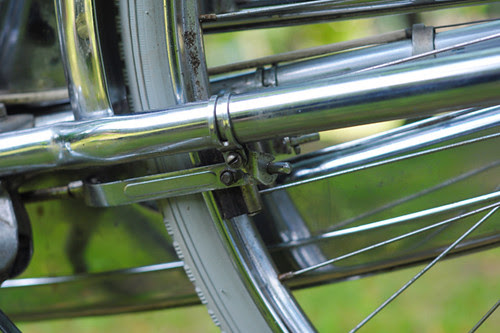 The rod brakes, however, are a little different. I need to take close-ups of the other bike for a comparison. They need new brake pads, but work reasonably well in the meantime. The rear one is stronger than the front. 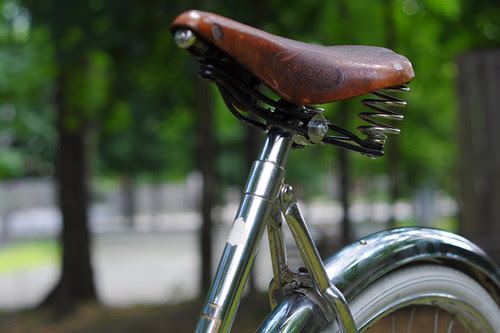 My understanding is that originally these bikes came with Brooks B33 saddles, but it was missing here. The seller included a spare from his personal collection, which is a brown Brooks "Champion B66 S.T.R." This is a long-nosed men's saddle, most comparable to today's Flyer model. I would love to get a shorter nosed model for this bike, and if anyone would like to trade let me know. 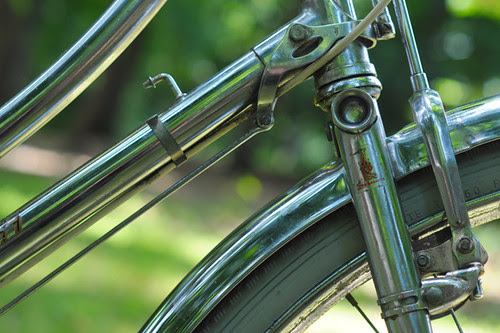 I am still just getting to know this bike and not sure what I will do with it in the immediate future. Putting it in storage was my plan, but I rode it and it feels too nice to put away just yet. 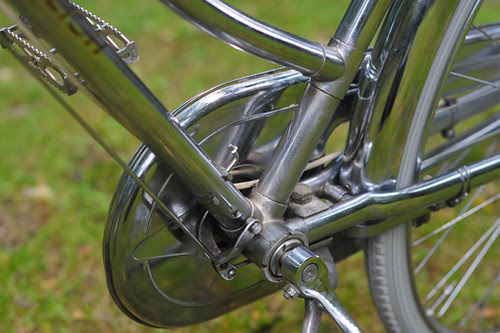 For now I will get the cotters replaced and see what else needs adjusting. There is a local vintage bike show coming up in August and I might take it there if the timing works out. 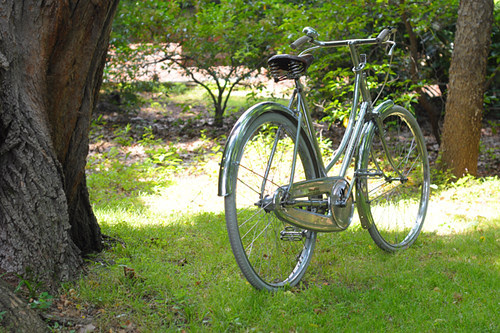 While this bicycle is rare by virtue of being unusual (I only know of two other lady's chrome DL-1s in existence - one of them here), the late vintage and used condition don't make it especially valuable in collectors' terms. It is, however, historically significant - serving as an example of Raleigh's chrome finish and late-production DL-1 models. I can hardly believe my luck in getting my hands on one of these.

More information on chrome Raleighs can be found here. And a good source of information on DL-1s in general is the author of this blog. Also worth visiting is Velo Ulli's collection - his focus is on pre-1920s bikes and it's glorious eye candy. It's always good to know collectors whose interests are different from yours... that way they can pass those unwanted bikes they pick up onto you!
Labels: DL-1 Raleigh vintage