How a Grocery Store Won Me Back 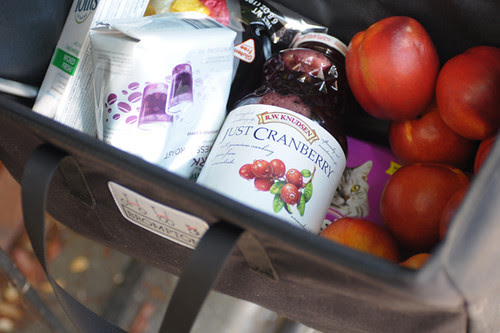 There is a grocery store nearby that I've always neglected despite its proximity. They did not have a great selection of foods. They often sold stuff that was spoiled or expired. At the the checkout, the cashiers would argue with me when I declined plastic bags. And the bike parking outside was iffy. This store is so close I could easily walk to it, but carrying bags of groceries is just easier on a bike. And since I did food shopping by bike anyway, I figured I might as well shop at the stores I preferred, even if it meant riding further.

I suspect that other residents of our neighbourhood felt similarly, because about half a year ago the nearby store began to aggressively reinvent itself. They cleaned up, reorganised their merchandise, added an organic foods section. They expanded their selection of produce. The quality control is much improved. They now sell reusable shopping bags and don't argue when customers decline plastic.

But best of all, they allow me to roll my Brompton inside and use it as a shopping cart. No questions or comments, other than the occasional "Look, it's a bike and shopping cart in one!" Considering that other shops have thrown me out even when I've walked in with the bike fully folded, the permissive attitude of this store came as a pleasant surprise. Walking in with a small-wheel shopper is really no different from pushing a huge shopping cart; they get it. Now I shop there almost exclusively. Not only have they improved their store, but they've made shopping by bike a breeze.

While those of us who ride small wheel shoppers are in the minority, many cyclists report that their shopping preferences are guided by the store's bike-friendlieness. This can refer to a number of things, from adequate bike parking, to the parking lot being safe to navigate, to the location itself being reachable via a bike-friendly route. Do these considerations play a role in where you do your grocery shopping?
Labels: Brompton food social commentary transport transportation options urban cycling