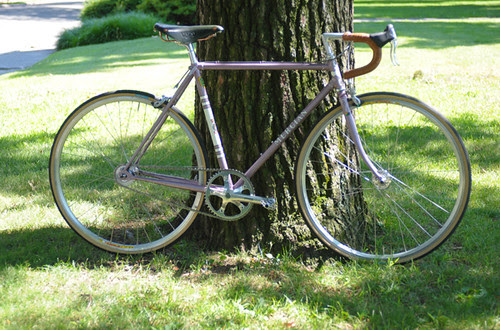 I've had a Mercian Vincitore since last Fall, riding it as a fixed gear fitted with 28mm Panaracer Pasela tires. Those tires are not known for their raciness, but honestly that suited me just fine, since my fixed gear riding style is best described as "pottering about." Still, eventually I got curious what this machine was capable of if fitted with faster road tires. I also wanted to feel what the bike was like to ride non-fixed. Now the Mercian sports 26mm Grand Bois Cerf tires and has temporarily been turned into a freewheel single speed. 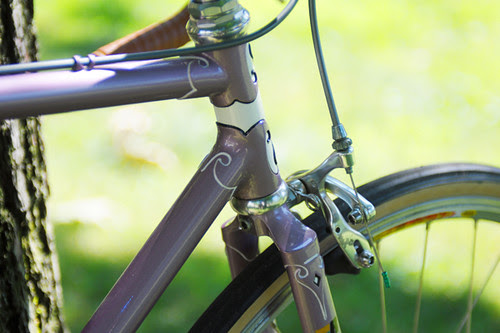 The bike rides better than ever. The tires have a lighter feel to them and the ride quality - which I didn't think needed improving at all - is nonetheless improved. I should note that right now I have an old cheap flip-flop hub wheelset installed and not the nice Phil Wood wheelset we originally built it up with. This does not seem to make any difference. The bike feels as if I am riding on narrow balloon tires, with the speed and maneuverability of a fast roadbike. 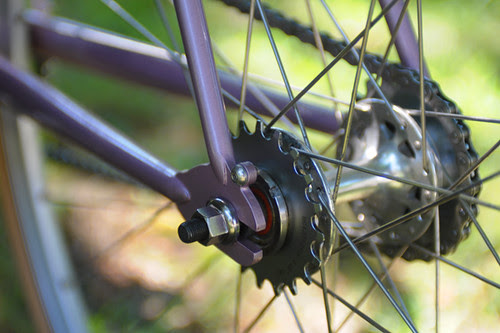 "Freeing" the drivetrain changed the feel of the bike in several ways. It made me more aware of how responsive it is to pedaling efforts. It made me want to alter my positioning - namely to move the saddle back a bit and lower the handlebars. It also made me wish the bike had gears! I didn't miss them at all in fixed gear mode, but now the bike seems to "want" them. It's probably just because I have never ridden a non-fixed single speed roadbike before. It will be interesting to experience it this way for a bit. After that I will change it back to fixed. 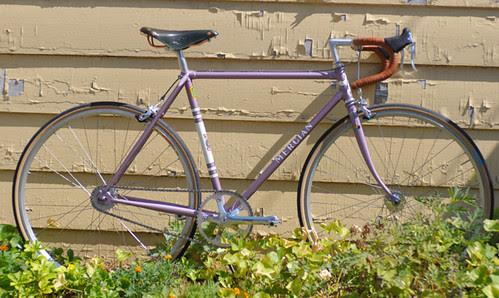 I will also be making some component changes in the coming year. The gearing has been lowered twice already and it's clear that it needs to be even lower to suit my pedaling style. The Campagnolo crankset makes that impossible, since the smallest available ring is 49t. I will replace the drivetrain with something that will afford a categorically lower gear. Also, now that the bike is no longer fixed, I realise that the (Veloce) brake calipers aren't just "a bit weak" as I thought before, but simply do not work here; I must have been compensating with my feet more than I realised. We will try replacing the brake pads, but I doubt that will make enough of a difference. A better solution seems to get a set of plain ol' Tektro medium reach calipers. The initial build was based on the parts that were available to me at the time more than anything, but I like to spin fast and I like brakes that work well, so the components will have to change. 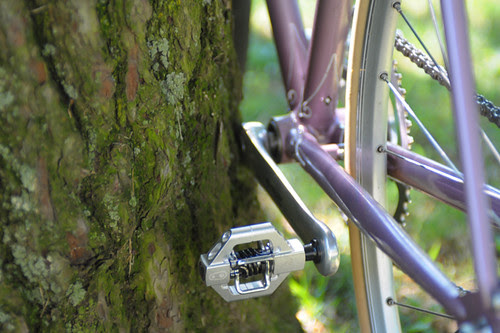 I've enjoyed riding this bike tremendously over the past year and think it was the right choice for me for a fixed gear bike. I like the versatility and can see myself putting fenders and a rack on it in some distant future. In the nearer future, I am curious how a radically lowered gearing will affect my experience of the bike, in particular when I use it for recovery rides. I think it's the right way to go.
Labels: fixed gear mercian tires