Finding Magic in Our Own Back Yard 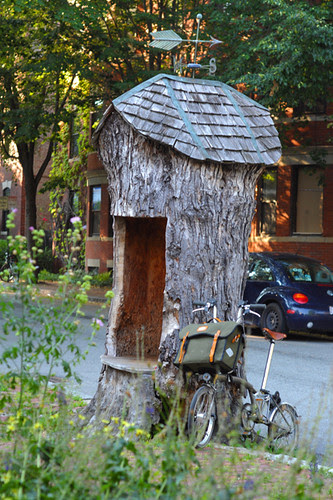 It was almost a year ago that I first saw it. Making my way home through a tangle of unexplored back roads, I found myself on a tiny side street near Porter Square in Cambridge. Brick sidewalks, Victorian houses, overgrown yards, overarching tree branches. It was getting dark and I rode right past the mysterious structure just as I caught a glimpse of it out of the corer of my eye. It was like something out of a fairy tale. I told myself that I would return the following day to have a better look. And I tried - but for the life of me, I could not find the street again. I retraced my steps and criss-crossed the little neighbourhood several times, but to no avail. Eventually I gave up, wondering whether my tired mind could have imagined it. ...Until two days ago, when quite by accident I found myself on the same little street again and suddenly there it was: A tiny house, fashioned from a hollowed-out tree trunk. 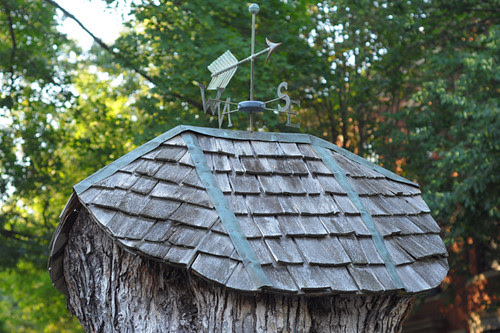 Now that I had more time to examine it, it was even better than I remembered. There was a shingled roof with a weathervane on top. The interior was carved out neatly to form a cozy chamber just large enough to fit a child or an adult in a crouching position. Inside were stacks of children's books, as well as a guest book where visitors left each other messages. There was no indication that the tree house was privately owned; it seemed to be intended for public access. 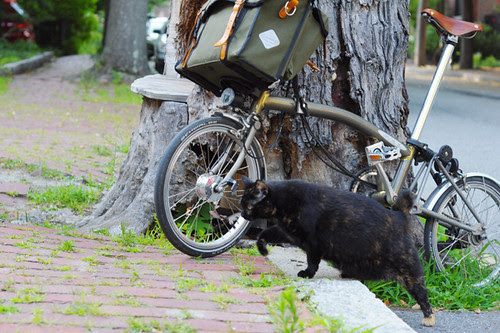 And as I stuck my head in, it turned out I was not the only visitor. In the corner sat a small cat. Her mottled brown coat blended in with the inside of the tree and I had not noticed her there in the dark. I was doubly taken aback, because at first glance it appeared the cat was reading. But upon closer examination she was just grooming her paw on top of an open book. Her routine interrupted by my presence, the cat jumped out and began circling the tree in a proprietary manner, making communicative chirping sounds each time she passed me. 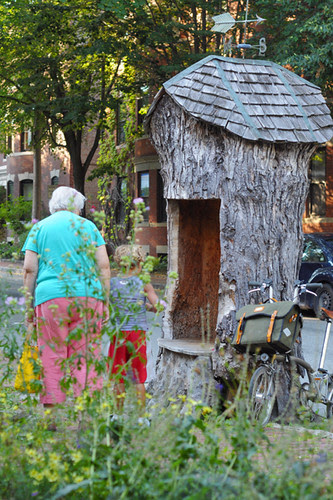 A woman and her grandson walked by and were equally intrigued by the scene. They assumed the cat was mine and that I'd brought her in my bicycle bag. But I explained that the cat was probably the owner of the tree house. It seemed like a reasonable enough conclusion. The boy climbed inside to look at the books and the cat interacted with all of us - jumping in and out of the tree, circling, and chirping.  She did not appear to be disturbed by our presence; it was more like she was trying to talk to us. 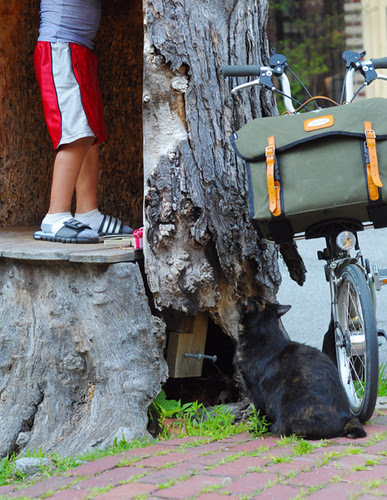 This time around I remembered the location and later did some investigating. Turns out the structure is modeled after Winnie the Pooh's House. It's a book and diary exchange for the neighbourhood children. Created by local furniture artist Mitch Ryerson, the house was carved from the trunk of a silver maple that was knocked down in a winter storm fifteen years ago. Since then it's become a secret local landmark.

The neighbourhood we live in is made up of lots of tiny pocket neighbourhoods that are really their own little worlds. It still amazes me how often I stumble upon new things here, especially of an unusual or mysterious nature. More often than not it happens when I am out on my bike - looking for short cuts, or for a shady route away from the sunny main road. Finding a bit of magic in our own back yard is par of the course when traveling on two wheels.
Labels: Boston Brompton cats stories