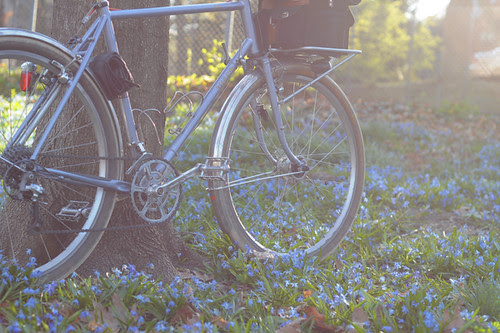 My first cycling dreams were vague and atmospheric. When I rode along the Danube in the Austrian countryside, I would re-experience these rides in my sleep constantly. It was mostly the scenery and the light I would dream of. That backlit look as the day fades into evening, the shimmering water, the aspens and the wild flowers swaying in the breeze. The rides themselves resembled dream states, with their improbably long sunsets and no clear end or beginning to the winding Danube trail. Fading peals of laughter from party boats, the clanking of dishes in the back yards of houses I would cycle past. The sounds trailed off, almost ghostly. It would slowly grow dark as I pedaled and pedaled and pedaled. When I remember one of these rides now, I cannot be sure whether it is the actual ride or the dream I am remembering.

Riding for transportation in Boston, cycling disappeared from my dreams for some time. The few I remember are short, anxiety-filled re-enactments of close calls - I'd wake up with a sinking feeling in my stomach from a car having cut me off or passed too closely. In waking life I experienced no fear or nervousness when riding in traffic, but it must have been there on some level - what I would not acknowledge in my conscious state surfacing in dreams.

Later it was roadcycling that populated my dreamworld. Like an animal moving its paws in its sleep, I would pedal with my legs and shift gears with my fingers. The novel sensations of ergo levers played a starring role for some time. My fingers just wanted to keep using them even after the ride was over and I was fast asleep. Tap-tap-tap... spin-spin-spin... thumb press, thumb press!... spin-spin-spin! It was mostly just the motions and the speed I remember dreaming about, the anticipation of downhills. There was also a magical effortlessness to it that did not exist in real life. In my dreams, my legs never hurt and I cornered elegantly. Tap-tap-tap, spin-spin-spin! It could go on forever, just like that.

A late winter ride to Lost Lake led to a bicycling dream of cinematic proportions. In a small group we had ridden through the snow covered landscape of central Massachusetts, a route that culminated in a dramatic course of rolling hills. The combination of the stunning winter scenery and the sensation of the ride itself must have overwhelmed my impressionable mind. That night I dreamt of Pamela Blalock standing atop an icy mountain, her long platinum braid fluttering in the brutal wind. She pointed at something in the distance, and when I looked in that direction suddenly it was I who was there, along with Dina, Emily and Pamela herself. We were riding what I first thought were horses but turned out to be huge bicycles made of a rusty, coppery material. Later I recognised them to be life-sized versions of some of the wire sculptures I'd seen at Pamela's house, but in the dream this was not apparent. Weightlessly we pedaled up a steep, narrow road in a blizzard, and just as we crested the hill we saw that the pavement ahead had turned to ice. No longer in a procession, we were now side by side and our bicycles tied together with rope. With incredible speed, we slid down the endless winding hill like some giant 8-wheeled chariot. I let out an excited scream, but it was so cold that I made no sound.

Other dreams of cycling followed - rehashing the day's events, playing out fantastical narratives, expressing anxieties. Before embarking on an overnight ride to Maine, I dreamt that my dynamo light was not working and that I couldn't shift gears uphill. After the ride, I dreamt of cycling endlessly along the coastal saltwater marshes in the dark. I had a handlebar bag full of tiny fresh bagels. I took out a notepad and wrote a letter to a friend on the side of the road, then dropped it in a mailbox and kept riding. I do not remember what I wrote or to whom. The night was warm and dark, only the outlines of trees discernible in the distance. Morning never came. When I reached the Canadian border, the guard was expecting me and gave me a peanut butter and jelly sandwich. I kept pedaling. That was the last bicycling dream I remember.
Labels: roadcycling stories