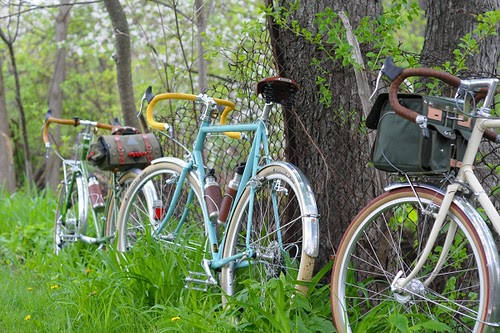 When I was getting my first new roadbike in spring 2010, I had it built up with bar-end shifters. This decision was arrived at via a process of elimination. I had ridden a couple of vintage roadbikes before with very limited success and found the classic downtube shifters too challenging. I had also tried to test ride some modern roadbikes and found their combination brake/shifter levers ("brifters") to be so uncomfortable that I had trouble using the brakes. Other cyclists I knew recommended bar-ends - an older style that had grown popular again in recent years. Rivendell - the manufacturer of the road frame I was having built up - was also strongly recommending this setup. And so that is what I went with. 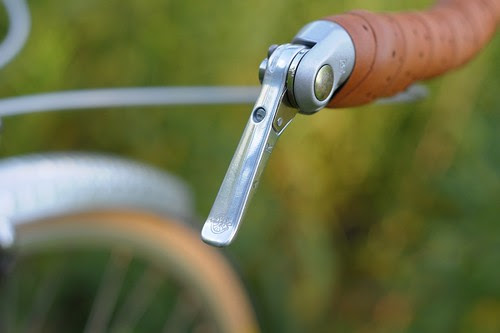 A bar-end shifter is exactly what it sounds like: a gear-changing lever installed at the end of the handlebar. There are different styles. Some are longer, others are shorter. Some are friction, others are indexed. I have tried a few now on different bikes, and my favourite remains what I went with originally: Silver friction shifters. The length and shape make them easier for me to operate than other models; I get more leverage. I find the friction mode easy and intuitive to use, and I like the control it gives me. If a gear is imperfectly adjusted, I can simply move it a tiny bit manually.  I can also shift multiple gears at a time quite easily. 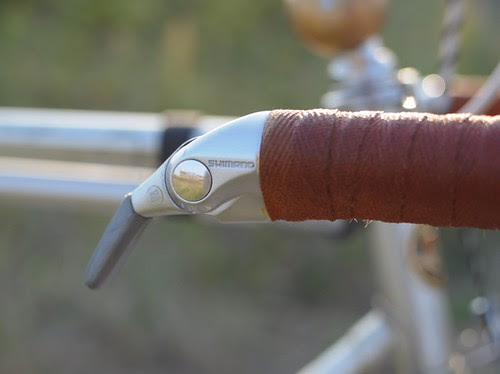 The shorter, indexable Shimano bar-ends are another popular choice for this style of shifters. The Co-Habitant uses them on his bikes and loves them. But personally I find them more effortful and less comfortable to use that the Silvers. 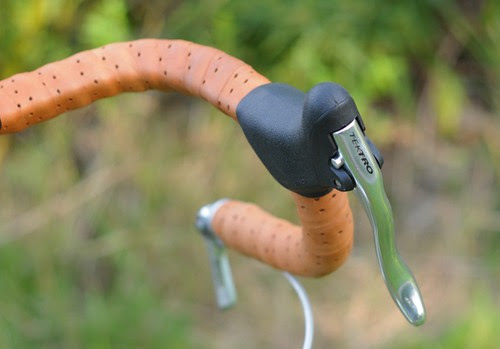 Over the time I rode with bar-end shifters, I was more or less fine with them. I was able to switch gears and I was able to install the brake levers I liked, since they were independent from the shifters. But I did find two things about the shifters less than ideal. One was that they required me to dramatically change my hand position(s) on the bars in order to switch gears. I got better and quicker at this over time, but nonetheless I was never "in love" with the process. The other issue was that when stopped or off the bike the shifters would often poke me and give me bruises. But both of these points seemed relatively minor at the time, and I was not considering a different lever setup. 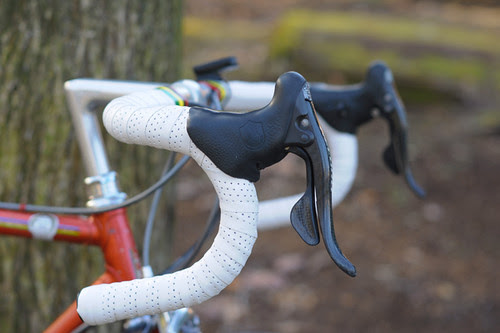 My switch to combination levers was a product of accidental discovery. I was discussing test riding a Seven roadbike with the staff of the Ride Studio Cafe, and all their demo models were set up with modern brifter-type levers. I told them about my inability to brake using brifters when I attempted to ride other modern roadbikes. Rob Vandermark asked which specific makes and models I'd tried. It had not occurred to me until then that this could make a real difference. I'd tried quite a few, all of them by Shimano and SRAM. Rob looked at the Tektro short reach brake levers on my own bike, and suggested I try Campagnolo; apparently the shape is very similar. And so it was. I test rode a demo bike with Campagnolo ergo shifters and it was as if my brain became integrated with them immediately. I resisted making a rash decision to make the switch on my own bike, but a couple of months later I finally did switch and have not looked back. 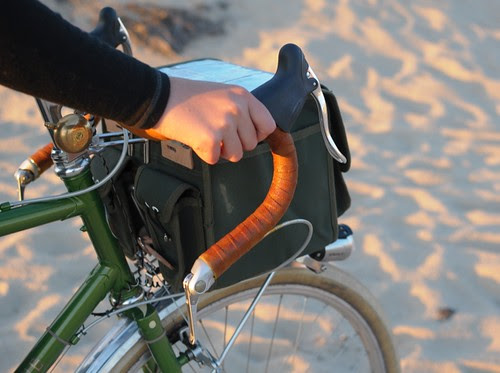 So what do I think of bar-end shifters in retrospect... Pretty much the same thing as before. I have no desire to "bash" them or to proclaim the superiority of brifters; it is really a matter of individual preference. I still like bar-ends and I am fine riding a roadbike set up with them. I especially love the friction mode. If given a choice of models, my favourites are the Silvers; they feel great in my hands. I imagine that bar-ends are well suited for those who prefer their shifters to be separate from their brake levers, who wish to have the option of friction shifting, and who have no problems moving their hands to the edges of the drops swiftly and efficiently when they need to change gears. I am sure there are other contexts in which bar-ends are the preferred choice, and those who have things to add on the subject are welcome to chime in. To me, bar-ends will always be associated with my first road cycling experiences, and I retain a fondness for them despite having switched to another system.
Labels: drop bars handlebars roadcycling shifters