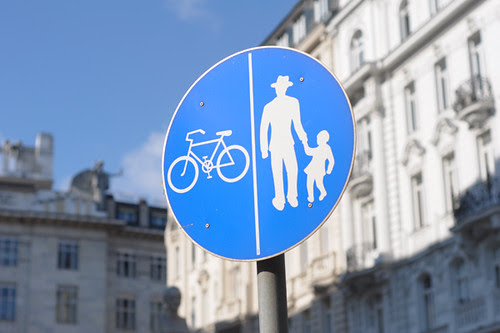 As cyclists, when we are not sharing the roads with cars we often share space with pedestrians: mixed use paths (MUPs), off road trails, certain types of crossings, even the road itself in areas with no sidewalks. To new cyclists this usually seems like a safer option to riding in traffic, but they soon learn that mixing with pedestrians presents its own challenges. People on foot move differently than those on a bike and their behaviour can be difficult to predict. Compared to cyclists, pedestrians are less likely to keep a consistent line of travel and more likely to make unexpected stops, which makes passing them tricky. Children make sudden u-turns. Dog walkers let their canines loose. Couples shove each other playfully across the path. Joggers zig-zag obliviously with their headphones on. Even seemingly predictable walkers moving at a steady pace can stop without warning if they get a phone call or notice something interesting. These things happen.

A local woman new to bicycling once told me she was hurt and baffled to discover how much pedestrians, whom she had considered allies, dislike cyclists - not only failing to apologise, but inevitably blaming her for the near-collisions they cause. (I can certainly relate: Just earlier this week a man whose undisciplined dog lunged at my wheel as I passed them cursed at me for not being "more careful.") I think the reason for this is simply that we, as cyclists, are perceived as more aggressive because we are operating machines and moving faster than walking speed. Despite whose fault an incident is, we are seen as the dangerous ones.

It doesn't help matters that pedestrians might not hear a cyclist's approach, or might not know how to react even when they do. In my 4th year of riding in Boston now, I have still not found an ideal way to gently warn those on foot of my presence. If I ring my bell, they might freeze or panic. If I say "on your left" they might instinctively jump to the left. If I say "excuse me" they might misinterpret this to mean "get out of my way" and get offended. And if I say nothing at all and don't ring a bell, they might move into my line of travel at the exact moment I try to pass them. No solution is guaranteed to work.

When sharing space with pedestrians, I have now simply learned to accept the inherent unpredictability of it; the need for vigilance and reduced speed. I expect inconsistency, especially when children are involved. I pass carefully and never assume my approach is heard or understood. I am mindful of dogs even if they appear to be on a short leash (those things are sometimes expandable). When in doubt, I slow to a crawl or stop altogether. And I do not enter into altercations: If a pedestrian at fault fails to apologise or even shouts at me, I just let it go. While these incidents can be frustrating, I try to keep in mind that as a cyclist I am the fast and scary one; I am the one who is operating a machine.

When I voiced this philosophy to the woman who'd complained of being disliked by pedestrians, she pointed out that cyclists are no less vulnerable in a collision and therefore such a distinction is unfair. Maybe so, but I don't think it's a matter of fairness. I suspect that pedestrians' response to cyclists as "fast machines, therefore dangerous" is a visceral one. Should parents be taken to task for not supervising their children and allowing them to run across the path? Should dog walkers be reported for not obeying the leashing laws? Maybe, but on some level that seems petty to me and I just don't see it making a real difference. The only reasonable solution, in my view, is to separate the infrastructure and not group pedestrians and cyclists together. Until then, we must make do with what is available, cycling responsibly and cautiously in the shared space.
Labels: social commentary trails transport transportation options